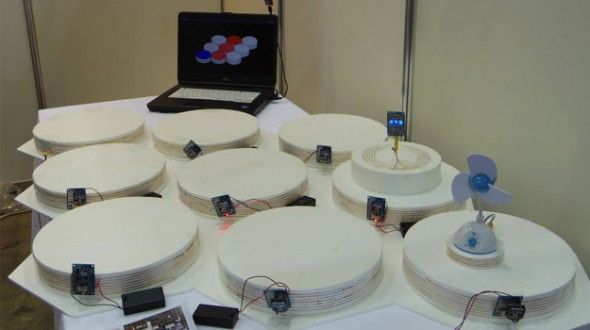 Wouldn’t it be great if you could just carry around a smartphone or laptop and have power available anywhere in a room? True wireless power is a dream many engineers have been chasing after for years, but progress has been excruciatingly slow. Now a research group from the University of Tokyo has created a prototype of just such a system called multi-hop wireless power transmission.

Many smartphones can be charged without wires, but you have to place them directly on an inductive pad tethered to the wall. Ideally, power should be able to flow to your devices anywhere in a room without worrying about the location of an outlet. A multi-hop transmission system has a lot in common with some past attempts at transmitting wireless power, but instead of blasting energy out in all directions to be picked up be devices, it uses a series of resonators to move the power where it needs to go like a frog leaping across lily pads.

Power usage at the other end could happen in a number of ways, either from inductive surface charging (like we currently have) or another type of short-range wireless transmission. The advantage to multi-hop transmission is that the power can come from very far away without wasting as much power as you would beaming it wirelessly all the way to the destination.

The system was demoed recently at the recent Techno-Frontier exhibition with nine resonators, one of which was connected to the power source. This early version of the technology can’t transmit much power–about enough to power a small LED lamp in the demo–but the path the power takes from pad to pad can be changed in real time with software. The creators see this tech being built into floors and walls so you’re never going to be far away from power, even if the nearest outlet is in the next room over.