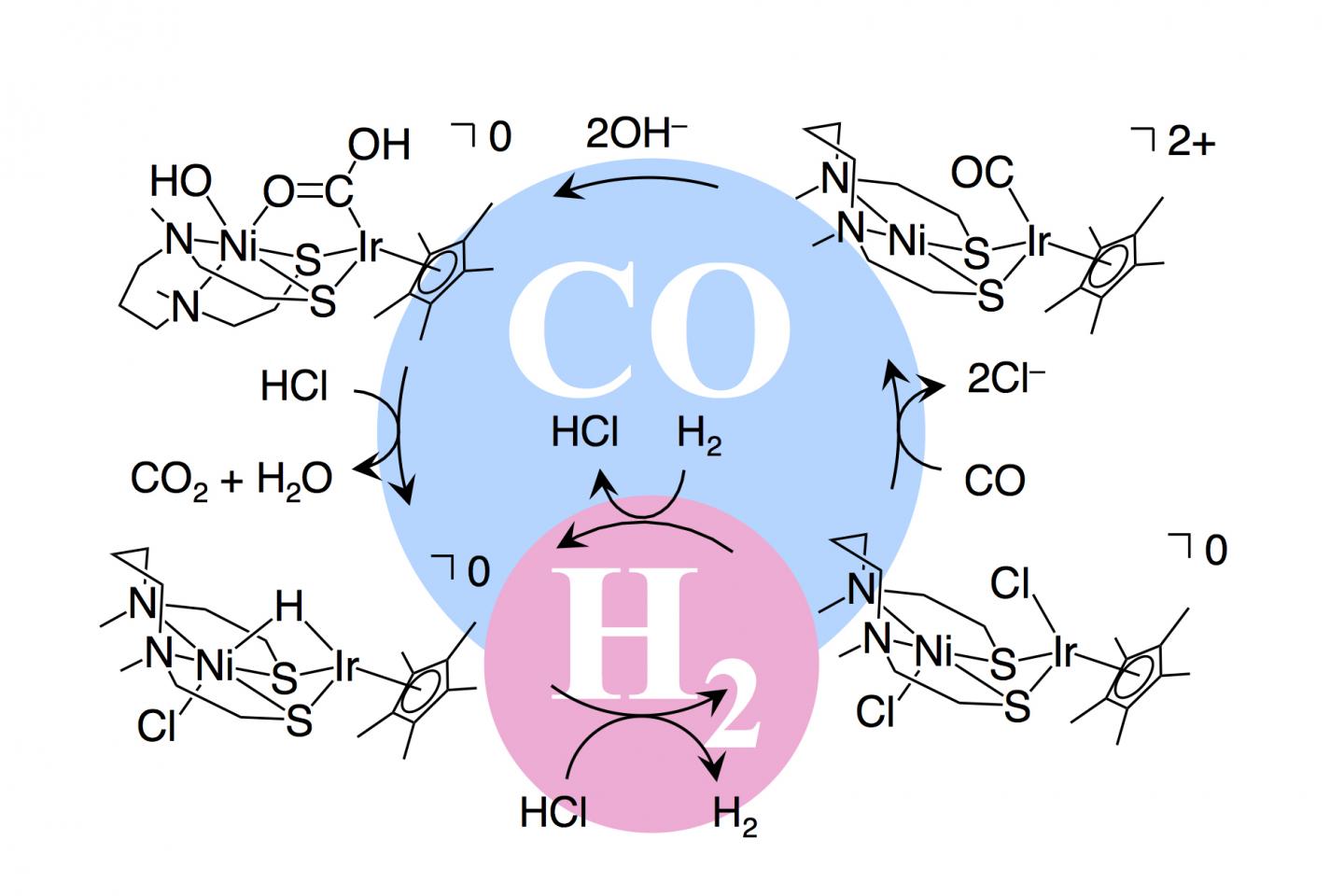 Reaction mechanism with a catalyst for fuel cells that use hydrogen and carbon monoxide as fuels.

Kyushu, Japan--Demand for eco-friendly fuel sources is increasing as the goal of weaning off our reliance on fossil fuels becomes commonly recognized. Hydrogen represents a possible sustainable fuel source when it is produced from water and burned with oxygen because only water is released as a by-product. The oxidation of hydrogen to release energy and water using fuel cells containing catalysts is being researched intensively. However, catalysts used in hydrogen oxidation generally suffer from poisoning by carbon monoxide, which is present as a contaminant in commercial hydrogen gas. Thus, the ability to oxidize both hydrogen and carbon monoxide in the same reaction system is an attractive prospect to avoid catalyst poisoning and increase the efficiency of energy production from hydrogen.

"We found that the catalyst reacted with hydrogen to form a hydride complex under acidic conditions," says first author Professor Seiji Ogo, Faculty of Engineering/ International Institute for Carbon-Neutral Energy Research (WPI-I2CNER), Kyushu University. "In addition, the catalyst readily coordinated with carbon monoxide, which was oxidized to carbon dioxide, under basic conditions."

The team then investigated the resistance of their catalyst to poisoning by carbon monoxide in a prototype fuel cell using feed gases of hydrogen, carbon monoxide, and a 1:1 mixture of the two. The power density of the fuel cell containing the catalyst depended on the system pH and feed gas composition. Oxidation of hydrogen by the catalyst was facilitated at low pH (acidic conditions) and oxidation of carbon monoxide was faster at high pH (basic conditions); these trends correspond well with the behavior observed for the related enzymes.

"The ability of our catalyst to use both hydrogen and carbon monoxide as energy sources represents an important advance in hydrogen technology," explains Ogo.

It is anticipated that catalysts for hydrogen oxidation that can resist carbon monoxide poisoning will allow development of hydrogen fuels cells with improved performance, representing another step on the path towards the ultimate aim of a sustainable society.