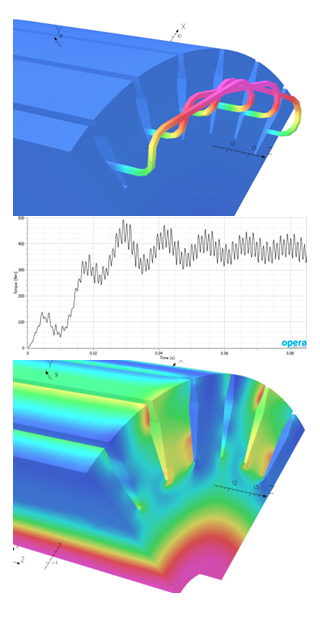 The Analysis Setup tool in Opera v18 enables users to set up a complete chain of electromagnetic, thermal and stress analysis simulation

An updated version of the Opera electromagnetic and multiphysics design software has been launched by Cobham Technical Services. The new version 18 release of this renowned finite element analysis and simulation software incorporates numerous enhancements to boost functionality, speed and accuracy, while further improving ease of use.

The new tool for electrical machine design can shorten development times significantly, by allowing highly detailed investigation of possible winding options prior to finite element analysis and simulation of the most promising designs. Called the Winding Tool, it enables designers to assess the feasibility and efficiency of different coil winding configurations – and their impact on machine performance – very easily and quickly. The software includes a winding wizard which creates a report of all feasible windings for a user-specified range of slots and poles, backed by detailed winding characteristics for each slot-pole combination. It is available for both the two-dimensional and three-dimensional Opera design software packages.

In the case of an electric motor design for example, designers could initially use the Winding Tool to define parameters such as the number of phases, slots and poles. A feasibility indicator instantly shows whether the specified configuration can be realized with single layer windings, while ‘calculate’ and ‘load’ buttons enable individual sets of current or previously stored parameters to be analyzed. As standard, the tool provides six different types of graphical output, each accessed easily by a tabbed selector. These comprise circular and linear representations of the optimal winding layout and a ‘star of slots’ representation of harmonic amplitude, together with graphs of winding factor and winding magnetomotive force (MMF) harmonics and a voltage phasor (Görges) diagram.

After verifying winding feasibility, designers would typically use the Winding Tool’s parameter input and graphical output facilities interactively, to investigate how potentially viable winding configurations could be improved or adapted to meet specific motor design objectives. For example, the effect of various winding skew angles on harmonics can be examined in detail as part of the design process - to minimize cogging torque, noise and vibration. The full set of results from each Winding Tool calculation is made available to other Opera facilities in the form of an Opera Object in the Python programming language.

The Opera-3d Modeler now has a graphical tool to simplify the preparation of data for analysis. It provides users with a very convenient means of controlling the sequence of analyses, using drag-and-drop editing to add or remove specific analysis stages to a list. Context sensitivity allows the tool to give instant visual feedback on the validity of requested changes, while the properties and parameters of analysis stages can be adjusted within the tool’s environment. Individual analysis stages can be saved out and used in other sequences to further speed the design process.

The new Analysis Setup tool simplifies advanced multiphysics simulation significantly, including transient cases. Users can now set up a complete chain of electromagnetic, thermal and stress analysis simulations for example, with no limit on complexity or sequence. Loops are allowed and the results from one simulation are passed automatically to the next. Shape deformation caused by forces acting on a model can be employed across different types of simulation; the deformed mesh from stress analysis can be nominated for use in subsequent electromagnetic or thermal analyses. In the case of coils, the software automatically accommodates any changes in current density values due to shape deformation, facilitating very accurate electromagnetic field analysis.

Another major feature in the latest release of Opera-3d is that the scope of the surface impedance boundary condition (SIBC) has been widened and is now available for use in transient electromagnetic analysis – including Demagnetization and Motional Analysis. This simplifies the modeling of materials with a very thin skin depth (compared to the size of the model) by replacing the volume elements in a conducting region with surface elements. The variation of fields and currents below the material’s surface is represented by a decaying waveform which models the skin depth.

One of the major applications for the new transient SIBC feature is electrical machines. For example, it could be used to improve the accuracy of eddy current and skin effect analysis in conducting parts – to help designers minimize hard-to-combat sources of losses in large rotating electrical machines such as multi-megawatt AC generators. Eddy currents induced in the surface of conductive components such as lamination clamps, securing bolts and metal cable ties can account for kilowatts of dissipative energy in such machines. Minimizing eddy current losses demands accurate modeling of the rate at which these currents decay due to skin effect, and is a task that traditionally can take many weeks of work.

The transient SIBC software code is structured to allow users to take advantage of parallel processing to speed analysis and simulation; the Opera Manager enables users to specify the maximum number of threads per job. While finite element analysis might seem an obvious candidate for code parallelization – to gain a speed advantage from the shared memory architecture of computers with multi-core processors – some areas benefit far more than others. Cobham therefore employs a progressive development policy, initially targeting software pinch points that will provide users with the largest performance gains. The transient SIBC is a prime candidate – parallel processing can help to shorten analysis times for complex models significantly, often from weeks to days.

Version 18 of Opera also consolidates or extends a number of features that were introduced in the previous version of this software. These include the ‘solve as 2d slice’ feature, which is now standard in the Opera-3d Machines Environment. It enables users to evaluate machine performance using a one element thick slice obtained from the full 3d model, with the appropriate boundary conditions applied automatically. Depending on model complexity this can dramatically reduce the number of elements that need to be solved – often by several orders of magnitude – resulting in much faster solution times. There is almost perfect correlation between results obtained from the 2d slice and the full 3d model, and the 2d slice can be converted to 3d to analyze end-effects.

The graphical user interfaces of Opera-2d and Opera-3d continue to make increasing use of tabbed menus to simplify operation and many are now backed by keyboard shortcuts. Enhanced context sensitivity means that drop-down menus are much shorter and mainly replaced by menu bar icons, allowing fast, single-click navigation and control. All high-level user interface functions can be displayed in English, French, Chinese and Japanese.