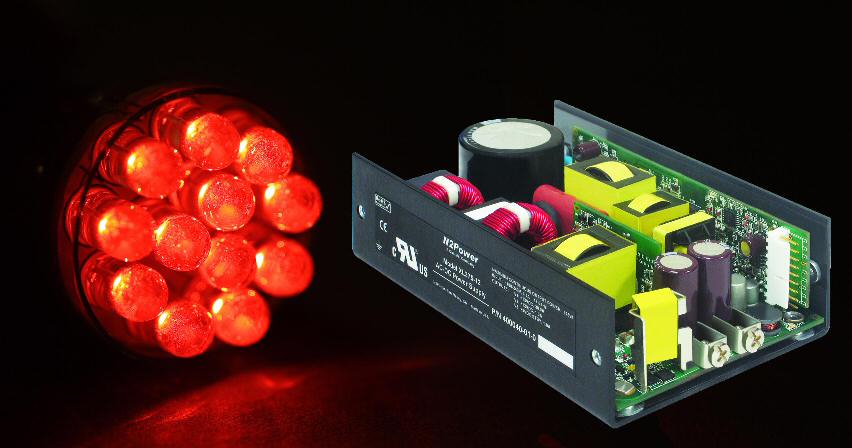 N2Power has announced constant-current versions of its 375-W AC-DC power supply dubbed XL375LED. The new units drive strings of LEDs in high-power lamps for industrial, entertainment, and outdoor lighting requirements. Their introduction celebrates the 50th anniversary of the first demonstration of a visible spectrum, modern day LED in October, 1962 by Nick Holonyak, Jr., while he was working at GE's Advanced Semiconductor Laboratory in New York. The XL375LED models offer single main outputs of 12, 24, 28, 36, 40, 48 or 56 V DC maximum. They also have a 12-V, 1-A auxiliary output (normally used to drive a cooling fan) and a 5-V, 1-A standby output. The compact 1.50 in (3.81 cm) high package has a footprint of just 3.3 x 5 in (8.38 x 12.7 cm) for a power density of over 15 W/in3 and is up to 93% efficient. This high efficiency further supports the lighting industry's drive to reduce energy consumption through the use of solid-state LED light sources. Other features of the XL375LED include active power-factor correction, current sharing, and inrush-current protection. The XL375LED has a universal AC input (90 to 305 V AC), which is particularly important for LED lighting manufacturers as they need to achieve 277 V AC input certification. The unit is RoHS compliant and meets all major international safety and EMC requirements. N2Power's Vice President of Sales, Randy Johnson, said, "This power supply family complements perfectly the high efficiency, long operating life, and reliability of LED lighting. The XL375LED supplies are rugged, compact, and designed in close consultation with LED lighting manufacturers, so they are tailored precisely for this application." The XL375LED models are priced from $199 each in OEM quantities of 500+. Sample units are available now. N2Power