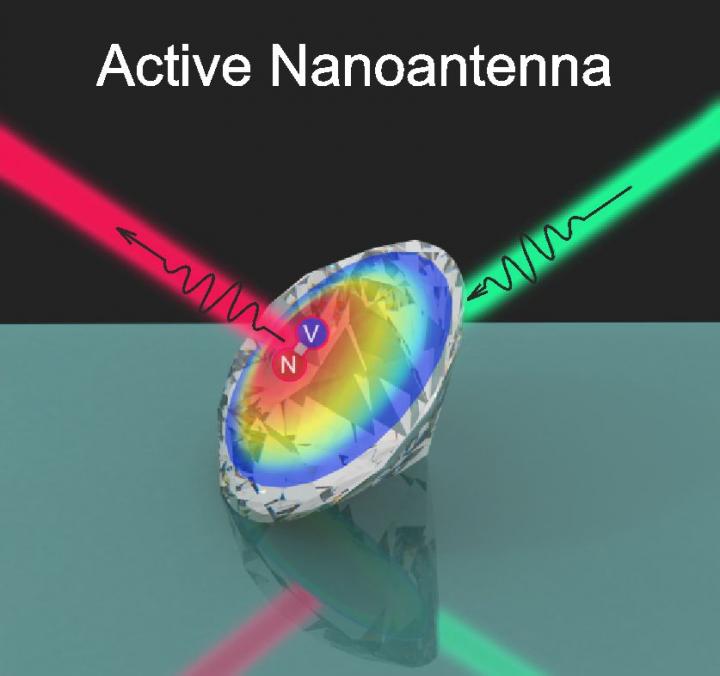 A research group from ITMO University developed a controlled light source based on nanodiamond for the first time in the world. Experiments have shown that diamond shell doubles the emission speed light sources and helps to control them without any additional nano- and microstructures. This was achieved due to artificially created defects in a diamond crystal lattice. Obtained results are important for the development of quantum computers and optical networks. The work is published in the Nanoscale.

Nanodiamonds are carbon nanostructures with unique properties. They have a sufficiently high refractive index, high thermal conductivity and low interaction activity. The scienrists used nanodiamonds with so-called nitrogen-vacancy centers (NV-centers). They are created artificially by removing carbon atoms from the diamond crystal lattice. Opened vacancy is then linked to an implanted nitrogen atom. The electron spin of such NV-center is easily controlled by light, so that using that electron spin you can record quantum information.

Scientists from ITMO University studied optical properties of nano-diamonds and found that their radiation can be enhanced by combining the NV-center luminescence spectrum with optical Mie resonances of diamond nanoparticles. This can be achieved at a certain position of the NV-center and the appropriate particle size. This way one can increase a nanodiamond Purcell factor. This indicator is used to estimate how a diamond shell affects the rate of spontaneous emission of the light source. If the Purcell factor increases, the luminescence fading time reduces while the signal itself becomes stronger and much easier to read.

The scientists emphasize that this effect is achieved by using only properties of nanodiamonds. "Usually, to accelerate the radiation, one has to create a complex system of resonators. But we managed to achieve similar results without any additional structures. We showed experimentally that the luminescence fading can be speeded up at least two times, using just simple physics," says Dmitry Zuev from The International Laboratory for Nanophotonics and Metamaterials.

In fact, experiments were carried out on nanodiamonds with multiple NV-centers. Even though the researchers also developed a theoretical model for the behavior of single photon sources in the diamond shell. Calculations showed that the speed of light emission can be increased by several dozen times. "Today getting a single photon from one NV-center in a nanoantenna is a rather difficult task. In order to implement such active nanoantenna in logic elements, for example, you need to manage their emission. In perspective, our concept will help to effectively manage single photon emission sources. It is very important for the development of quantum computers and optical communication networks," notes Anastasia Zalogina, lead author of the article, a member of the International Laboratory for Nanophotonics and metamaterials.