Nanomaterial Safety on a Nano Budget 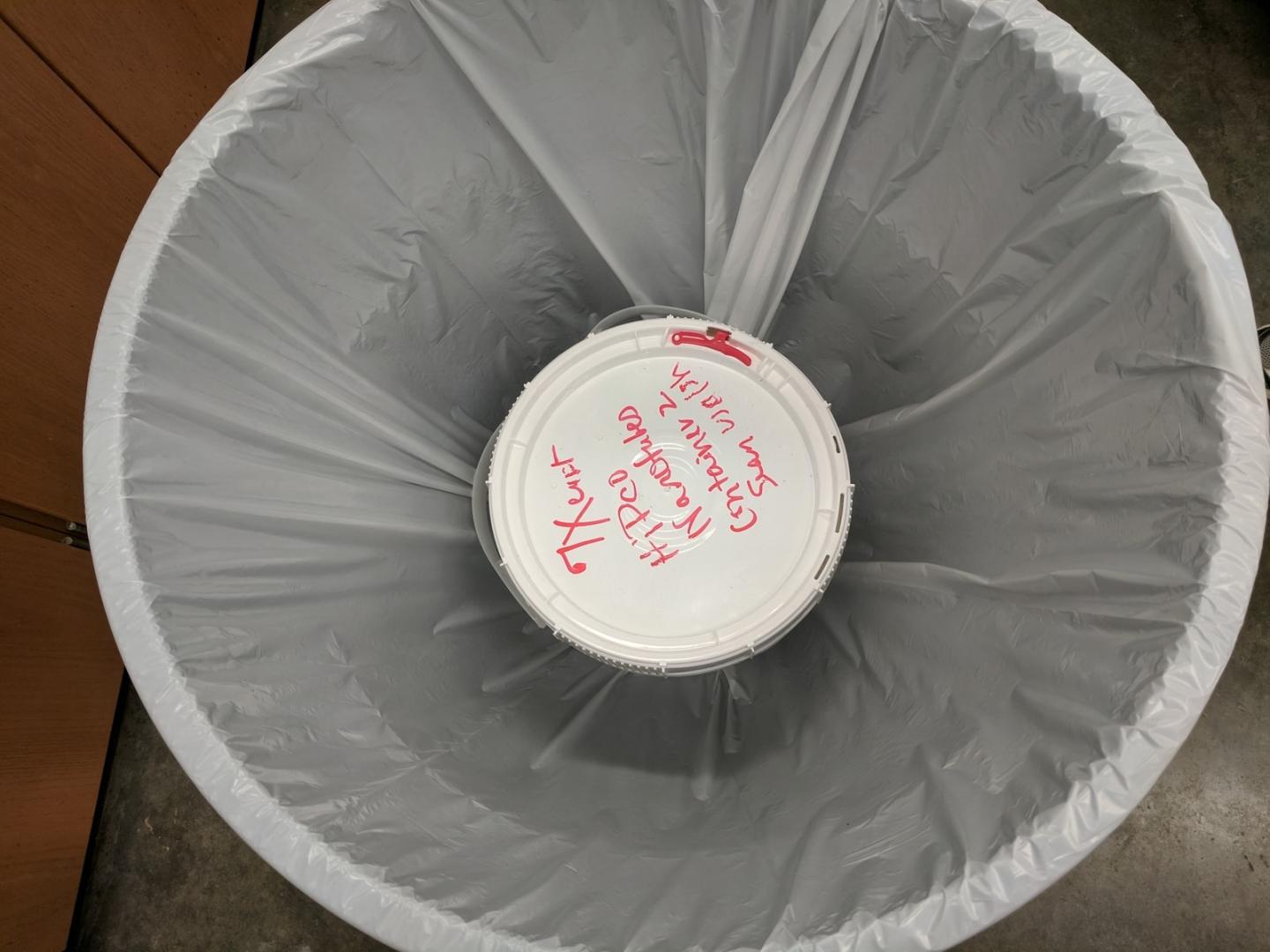 A plastic bucket and a plastic bag contain a 5-gallon supply of carbon nanotubes in a lab at Rice University, the beginning of the process to safely transfer the nanotubes for experimental use. The Rice lab published its technique in SN Applied Sciences.

HOUSTON - With a little practice, it doesn't take much more than 10 minutes, a couple of bags and a big bucket to keep nanomaterials in their place.

The Rice University lab of chemist Andrew Barron works with bulk carbon nanotubes on a variety of projects. Years ago, members of the lab became concerned that nanotubes could escape into the air, and developed a cheap and clean method to keep them contained as they were transferred from large containers into jars for experimental use.

More recently Barron himself became concerned that too few labs around the world were employing best practices to handle nanomaterials. He decided to share what his Rice team had learned.

"There was a series of studies that said if you're going to handle nanotubes, you really need to use safety protocols," Barron said. "Then I saw a study that said many labs didn't use any form of hood or containment system. In the U.S., it was really bad, and in Asia it was even worse. But there are a significant number of labs scaling up to use these materials at the kilogram scale without taking the proper precautions."

The lab's inexpensive method is detailed in an open-access paper in the Springer Nature journal SN Applied Sciences.

In bulk form, carbon nanotubes are fluffy and disperse easily if disturbed. The Rice lab typically stores the tubes in 5-gallon plastic buckets, and simply opening the lid is enough to send them flying because of their low density.

Varun Shenoy Gangoli, a research scientist in Barron's lab, and Pavan Raja, a scientist with Rice's Nanotechnology-Enabled Water Treatment center, developed for their own use a method that involves protecting the worker and sequestering loose tubes when removing smaller amounts of the material for use in experiments.

Full details are available in the paper, but the precautions include making sure workers are properly attired with long pants, long sleeves, lab coats, full goggles and face masks, along with two pairs of gloves duct-taped to the lab coat sleeves. The improvised glove bag involves a 25-gallon trash bin with a plastic bag taped to the rim. The unopened storage container is placed inside, and then the bin is covered with another transparent trash bag, with small holes cut in the top for access.

After transferring the nanotubes, acetone wipes are used to clean the gloves and more acetone is sprayed inside the barrel so settling nanotubes would stick to the surfaces. These can be recovered and returned to the storage container.

Barron said it took lab members time to learn to use the protocol efficiently, "but now they can get their samples in 5 to 10 minutes." He's sure other labs can and will enhance the technique for their own circumstances. He noted a poster presented at the Ninth Guadalupe Workshop on the proper handling of carbon nanotubes earned recognition and discussion among the world's premier researchers in the field, noting the importance of the work for agencies in general.

"When we decided to write about this, we were originally just going to put it on the web and hope somebody would read it occasionally," Barron said. "We couldn't imagine who would publish it, but we heard that an editor at Springer Nature was really keen to have published articles like this.

"I think this is something people will use," he said. "There's nothing outrageous but it helps everybody, from high schools and colleges that are starting to use nanoparticles for experiments to small companies. That was the goal: Let's provide a process that doesn't cost thousands of dollars to install and allows you to transfer nanomaterials safely and on a large scale. Finally, publish said work in an open-access journal to maximize the reach across the globe."