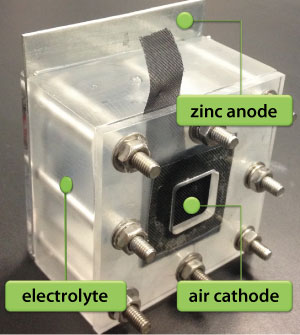 A cathode containing nanoparticles made from cobalt, cobalt oxide and a carbon-based outer shell improved the performance of a zinc-air battery.

A*STAR researchers have found that nanoparticles containing three different layers of material can help to boost the performance of a zinc-air battery. Zinc-air batteries are cheap, have a high energy density, and last for a very long time. Their use of a water-based electrolyte makes them safer than other batteries, so they’re often found in medical applications, such as hearing aids and heart monitoring devices.

The battery’s negative electrode contains zinc metal, which gives up electrons when it reacts with hydroxide ions in the electrolyte . Those electrons generate a current as they flow to the positive electrode, where they react with oxygen from the air to produce more hydroxide ions.

The sluggishness of the reaction with oxygen limits the battery’s voltage output and its performance at high current. Finding a catalyst to speed up the reaction could yield higher power and energy densities, opening a wider range of potential applications.

Yun Zong and Zhaolin Liu of the A*STAR Institute of Materials Research and Engineering and colleagues have developed a nanoparticle catalyst that could fit the bill. The particles are 20–50 nanometers across, with a cobalt core encased by an inner shell of cobalt oxide, which is surrounded by an outer shell of pyrolyzed polydopamine (PPD), a form of carbon ‘dotted’ with nitrogen atoms. These nanoparticles are coated on a porous carbon support that acts as an electrode. Their structure helps to prevent them from leaching cobalt or clumping together, and the protective outer shell also makes the nanoparticles more durable.

These three-layer nanoparticles efficiently transformed oxygen to hydroxide in a single step. The team suggests that nitrogen atoms in the PPD shell help to attract and make oxygen atoms more reactive on their way to catalytically active sites in the cobalt oxide and PPD. Meanwhile, the cobalt core and PPD shell help electrons to flow efficiently to the oxygen atoms. In contrast, similar particles containing only cobalt and cobalt oxide, or PPD alone, transformed oxygen in a two-step process that produced hydroperoxide, an undesirable and corrosive intermediate.

The researchers tested their electrode in a zinc-air battery (see image), and found that it could produce a current of five milliamps per square centimeter of electrode at 1.36 volts for five days, outperforming an electrode that relied on a conventional platinum catalyst.

“The next stage of this research includes the simplification of the synthetic route to facilitate large scale synthesis of the nanoparticles, and exploitation of other catalytic systems following the similar strategy,” says Zong.

The A*STAR-affiliated researchers contributing to this research are from the Institute of Materials Research and Engineering.

Institute of Materials Research and Engineering

Agency for Science, Technology and Research