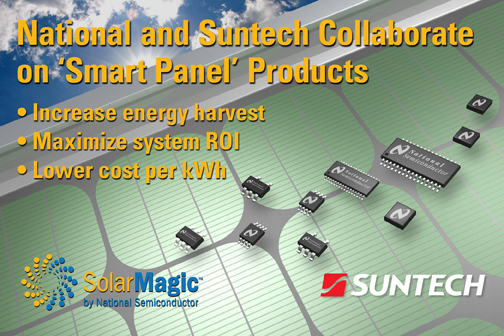 National Semiconductor Corp., a leader in the design and manufacture of high-performance analog semiconductors, announced today that it is collaborating with Suntech Power Holdings Co., Ltd., the world's largest producers of crystalline silicon solar panels, to develop "smart panel" technology, incorporating National Semiconductor's award-winning SolarMagic™ power optimizer chipset into Suntech solar panels to improve the power output of solar systems. "Smart panel technology is an important innovation that will help customers harvest more energy from their solar systems. We are pleased to collaborate with National Semiconductor to drive the development of this technology," said Mr. Shijun Cai, Senior Vice President of Suntech. This announcement follows an announcement in May of 2009 in which the companies announced the signing of a memorandum of understanding (MOU) for Suntech to evaluate National Semiconductor's SolarMagic technology with the intention of jointly promoting the technology and developing future solutions. Suntech has completed its evaluation and the two companies have advanced to the development phase. "Suntech was one of the first companies to recognize the value that integrated high-performance microelectronics bring to a photovoltaic panel. We are proud of our collaboration with Suntech to develop a next-generation product that will embed SolarMagic technology inside the junction box and ultimately boost the performance of solar arrays," said Michael Polacek, senior vice president, Key Market Segments and Business Development for National Semiconductor. National Semiconductor will exhibit the SolarMagic power optimizer chipset in its booth #6219 at the Solar Power International conference in Los Angeles on Oct. 12 -14, 2010. National's SolarMagic power optimizer chipset enables each solar module to produce the maximum energy regardless of whether other panels in the array are under-performing due to environmental mismatch. The technology enhances the energy harvest of each individual PV panel through a combination of advanced algorithms and leading-edge analog power management circuit techniques. In real-world tests involving shading and mismatch, Suntech modules with SolarMagic power optimizer technology were shown to recoup an average of 50 percent of lost energy, and in some cases captured as much as 75 percent of otherwise lost energy compared to standard panel performance. Suntech recently utilized SolarMagic power optimizers with its panels on the eco-friendly Suntech Guosheng, a solar energy-powered water vessel ferrying passengers at the Shanghai World Expo. www.national.com www.suntech-power.com