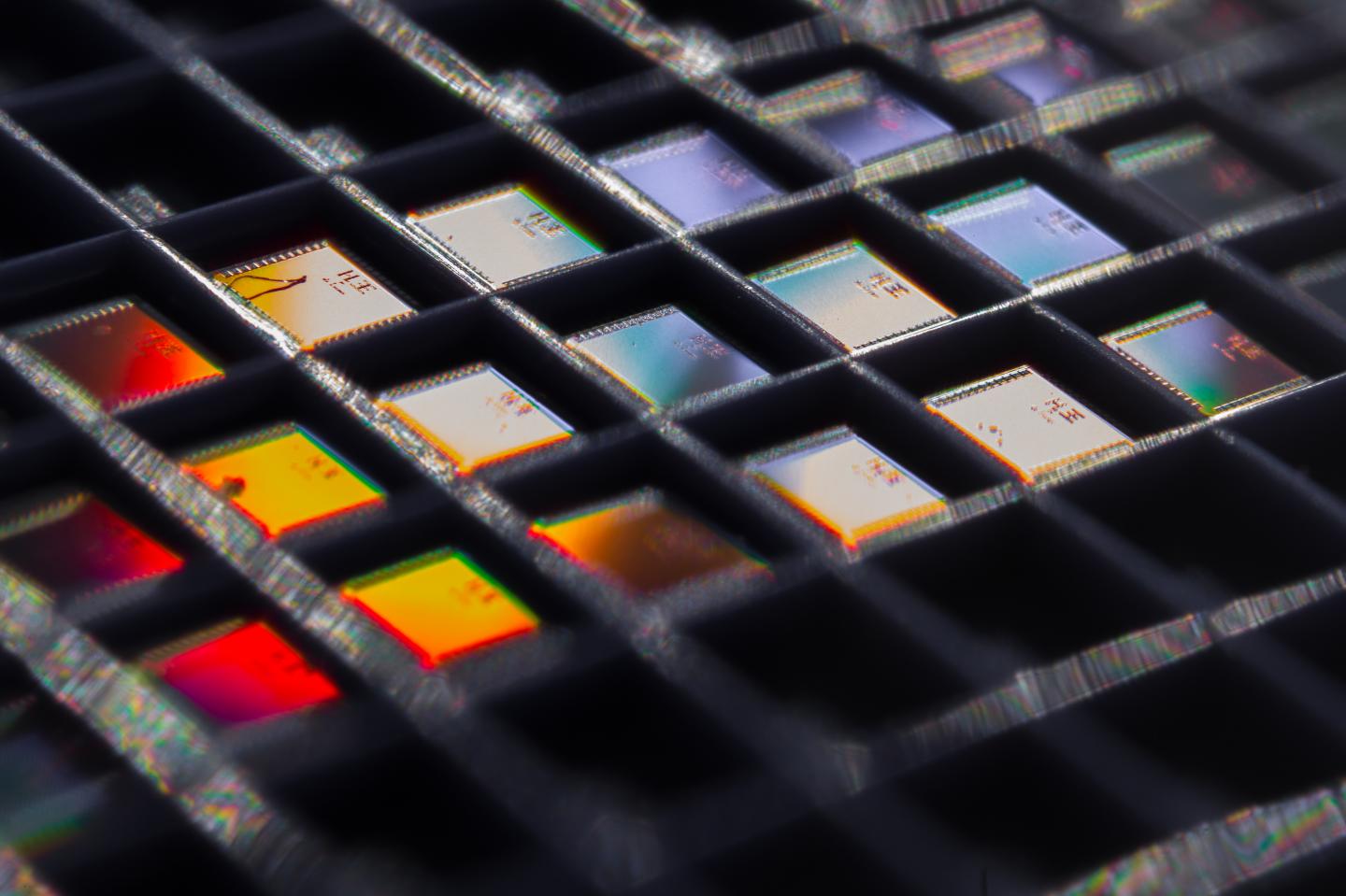 An array of the temperature sensor chips is shown.

Electrical engineers at the University of California San Diego have developed a temperature sensor that runs on only 113 picowatts of power -- 628 times lower power than the state of the art and about 10 billion times smaller than a watt. This near-zero-power temperature sensor could extend the battery life of wearable or implantable devices that monitor body temperature, smart home monitoring systems, Internet of Things devices and environmental monitoring systems.

The technology could also enable a new class of devices that can be powered by harvesting energy from low-power sources, such as the body or the surrounding environment, researchers said. The work was published in Scientific Reports on June 30.

"Our vision is to make wearable devices that are so unobtrusive, so invisible that users are virtually unaware that they're wearing their wearables, making them 'unawearables.' Our new near-zero-power technology could one day eliminate the need to ever change or recharge a battery," said Patrick Mercier, an electrical engineering professor at UC San Diego Jacobs School of Engineering and the study's senior author.

"We're building systems that have such low power requirements that they could potentially run for years on just a tiny battery," said Hui Wang, an electrical engineering Ph.D. student in Mercier's lab and the first author of the study.

Building ultra-low power, miniaturized electronic devices is the theme of Mercier's Energy-Efficient Microsystems lab at UC San Diego. Mercier also serves as co-director for the Center for Wearable Sensors at UC San Diego. A big part of his group's work focuses on boosting energy efficiencies of individual parts of an integrated circuit in order to reduce the power requirement of the system as a whole.

One example is the temperature sensor found in healthcare devices or smart thermostats. While the power requirement of state-of-the-art temperature sensors has been reduced to as low as tens of nanowatts, the one developed by Mercier's group runs on just 113 picowatts -- 628 times lower power.

Their new approach involves minimizing power in two domains: the current source and the conversion of temperature to a digital readout.

Researchers built an ultra-low power current source using what are called "gate leakage" transistors -- transistors in which tiny levels of current leak through the electronic barrier, or the gate. Transistors typically have a gate that can turn on and off the flow of electrons. But as the size of modern transistors continues to shrink, the gate material becomes so thin that it can no longer block electrons from leaking through -- a phenomenon known as the quantum tunneling effect.

Gate leakage is considered problematic in systems such as microprocessors or precision analog circuits. Here, researchers are taking advantage of it -- they're using these minuscule levels of electron flow to power the circuit.

"Many researchers are trying to get rid of leakage current, but we are exploiting it to build an ultra-low power current source," Hui said.

Using these current sources, researchers developed a less power-hungry way to digitize temperature. This process normally requires passing current through a resistor -- its resistance changes with temperature -- then measuring the resulting voltage, and then converting that voltage to its corresponding temperature using a high power analog to digital converter.

The temperature sensor is integrated into a small chip measuring 0.15 × 0.15 square millimeters in area. It operates at temperatures ranging from minus 20 C to 40 C. Its performance is fairly comparable to that of the state of the art even at near-zero-power, researchers said. One tradeoff is that the sensor has a response time of approximately one temperature update per second, which is slightly slower than existing temperature sensors. However, this response time is sufficient for devices that operate in the human body, homes and other environments where temperature do not fluctuate rapidly, researchers said.

Moving forward, the team is working to improve the accuracy of the temperature sensor. The team is also optimizing the design so that it can be successfully integrated into commercial devices.