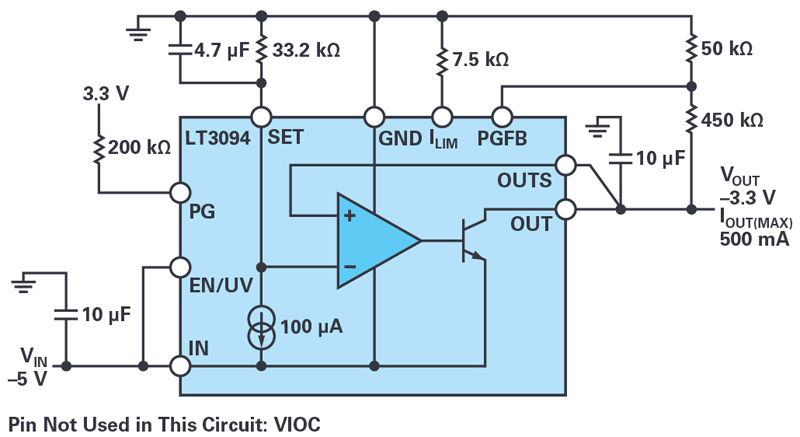 The LT3094 features a precision current source reference followed by a high performance output buffer. The negative output voltage is set with a −100 µA precision current source flowing through a single resistor. This current reference-based architecture offers a wide output voltage range (0Vto−19.5V) and provides virtually constant output noise, PSRR, and load regulation independent of the programmed output voltage. Figure 1 shows a typical application and the demonstration board is shown in Figure 2. The overall solution size is only about 10 mm × 10 mm. 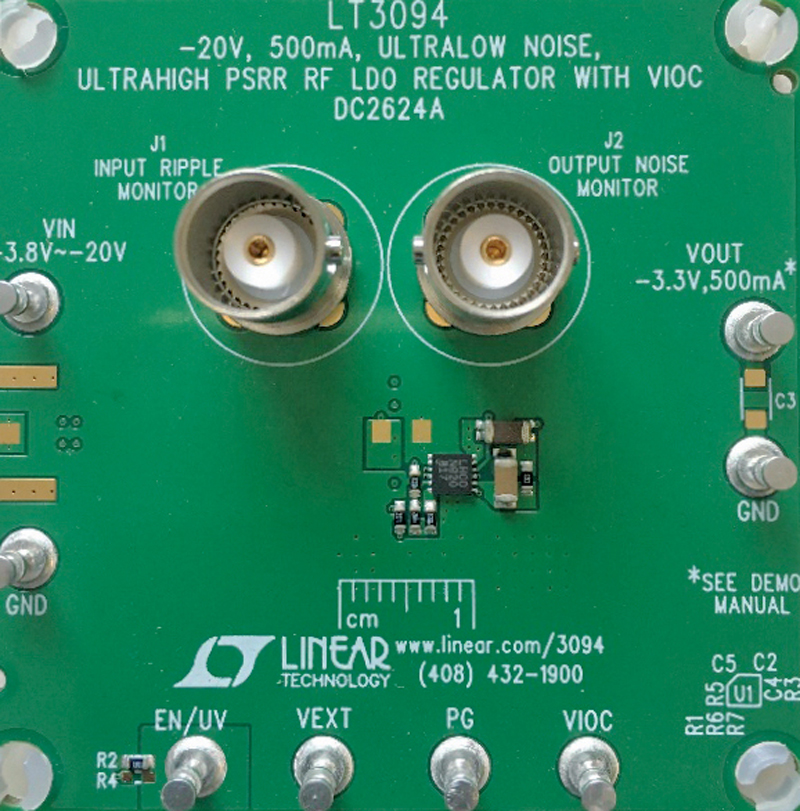 Table 1. Features of the LT3094 and Low Noise LDO Regulators

The LT3094 can be easily paralleled to increase output current. Figure 3 shows a solution using two LT3094s paralleled to achieve 1A output current. To parallel two devices, the SET pins are tied together, and one SET resistor, RSET, is placed between SET pin and ground. The current flowing though  RSET, is 200µA, twice the amount of the SET current in one device. For good current sharing, a small 20mΩ ballast resistor is used at each output of the LT3094. 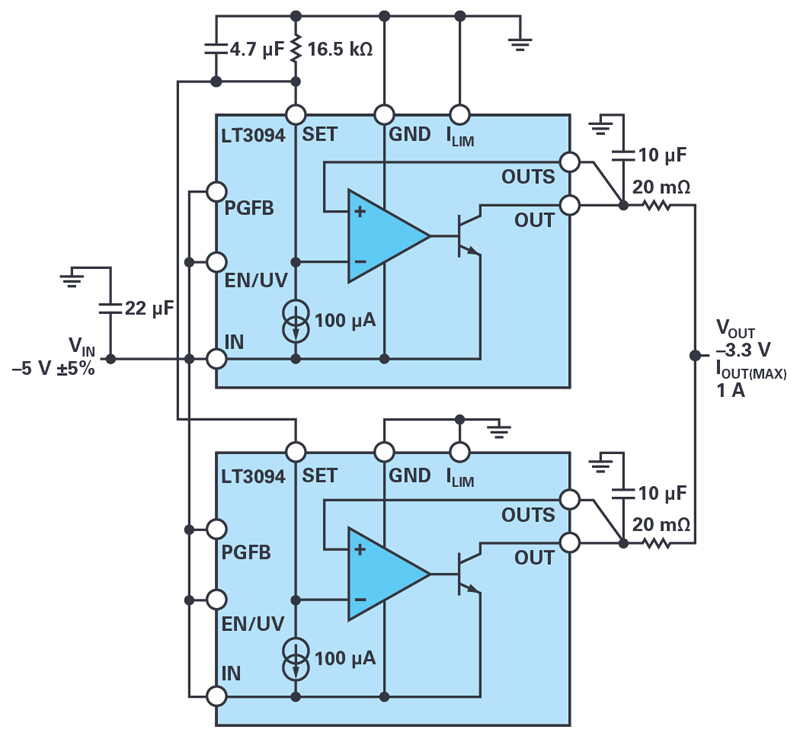 Figure 4 shows the thermal performance of the circuit in Figure 3 with−5 V input voltage and −3.3 V output voltage running at 1 A load current. The temperature of each part rises to about 50°C, indicating the heat is distributed equally. There is no limit on the number of devices that can be paralleled for even high output current and low output noise. 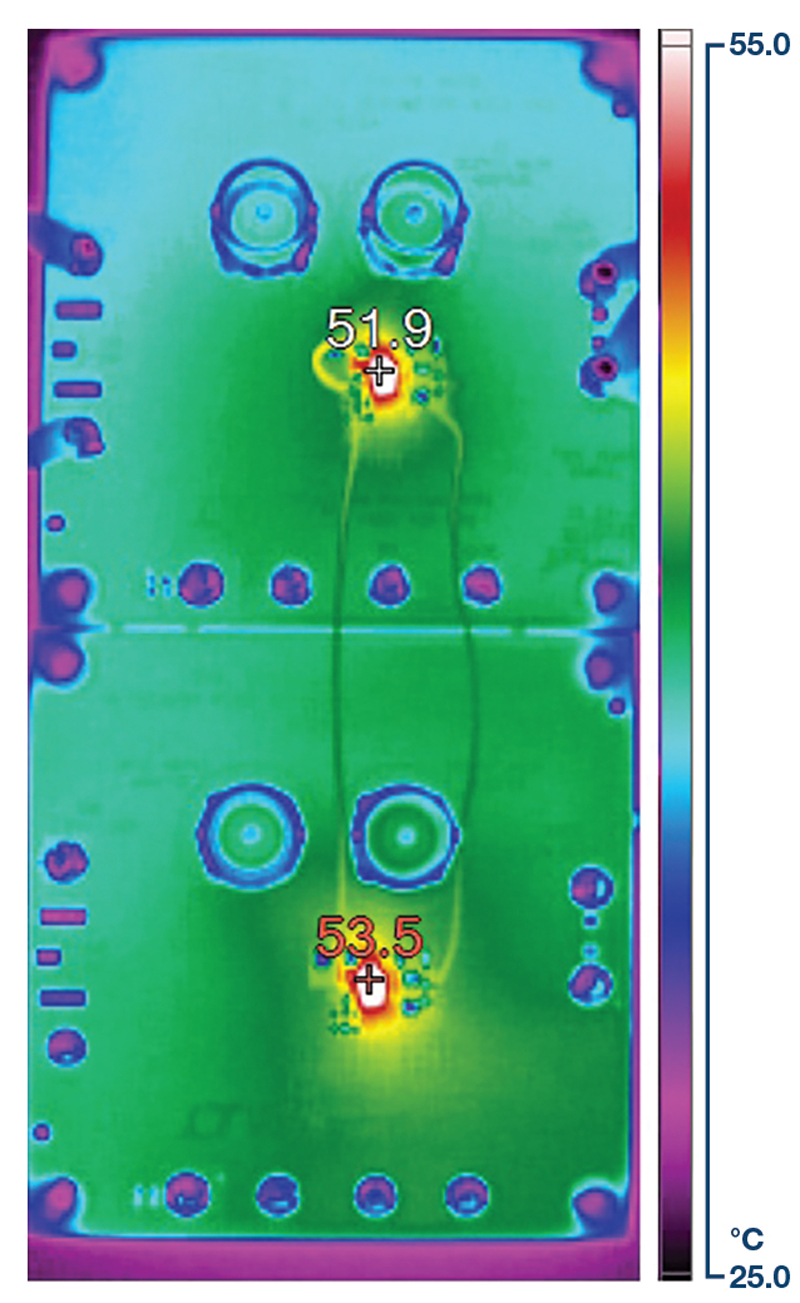 A power supply is generally built with a switching converter postregulated by an LDO regulator to achieve low output noise and high system efficiency. The optimized voltage difference between the LDO regulators input and output is about −1 V in order to maintain a good trade-off between power dissipation and PSRR. Maintaining this voltage difference is complicated in a variable output voltage system, but the LT3094 includes a tracking feature, VIOC, which keeps the voltage across the LDO regulator constant even as the output voltage varies.

Figure 5 is the schematic of a dual power supply using LT8582, LT3045-1, and LT3094. The LT8582 is a dual-channel PWM dc-to-dc converter with internal switches that can generate both positive and negative outputs from a single input. The first channel of LT8582 is configured as a SEPIC to generate a positive output, and the second channel is an inverting converter to generate the negative rail. In the negative rail, the voltage across the LT3094 is controlled by VIOC voltage as

The thermal images of the circuit running at 12V input are shown in Figure 6. When output voltage changes from ±3.3 V to ±12 V, the temperature rise of the LT3094 remains constant. Table 2 lists the voltage and current of all three devices. Figure 7 shows the transient response of the ±5 V power supply running at 12 V input.

The LT3094 is a negative LDO regulator featuring ultra low noise and ultra high PSRR. It features a current reference-based architecture that keeps noise and PSRR performance independent of the output voltage, and enables multiple LT3094s to be easily paralleled for increased load current and reduced output noise. The VIOC function minimizes the power dissipation of the LDO regulator when the LT3094 post regulates a switching converter, making it ideal in variable output voltage applications.