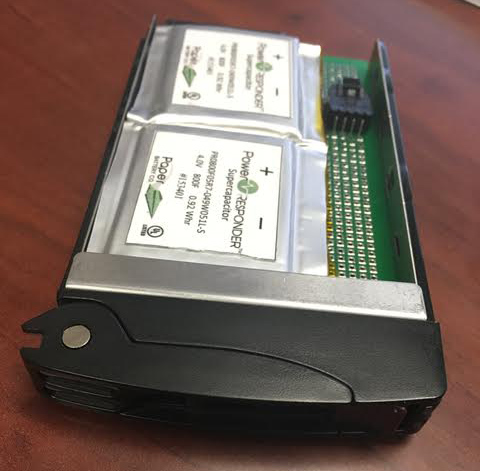 The PowerResponder supercapacitors pack more energy in a compact form factor for unique fit and function.

Netlist, a leading provider of high-performance and hybrid memory solutions for the cloud computing and storage markets, and Paper Battery Company, developer of innovative energy technologies, announced a strategic alliance at the Open Server Summit in Santa Clara, California. The two companies have developed a solution that maximizes the number of Netlist Non-Volatile DIMM (NVDIMM) products that can be deployed into a single server, resolving the current challenges which arise due to cabling, space and thermal limits.

“Netlist has been an innovator in Non-Volatile Memory (NVM) solutions for over a decade. We are excited to continue that innovation by incorporating the revolutionary energy sources of the Paper Battery Company with our NVDIMM’s,” said Brian Peterson, Senior Vice President of Sales and Marketing at Netlist. “Paper Battery Company’s offerings incorporated with our current NVDIMM deployments will enable customers to break new ground in application acceleration.”

“As the amount of data collected and analyzed by organizations grows exponentially, servers must expand their systems as well. This is what is so exciting about our partnership with Netlist. Our PowerResponder products can provide a superior form fit and function for critical backup power for Netlist NVM and can ultimately help our end-customers deploy large counts of NVM products inside today’s servers. Our products will fit even as broader system level deployments are considered in the near future,” said Mike Leiber, Paper Battery Company’s Director of Sales.

Netlist will be in the SNIA area of the Open Server Summit on April 13th to14th demonstrating real world application use cases for NVDIMM’s. Building on a series of use cases since the start of the year, twelve Netlist NV4 modules (NVDIMM-N) are being used to show a 300% improvement in the transactions over a leading Enterprise PCIe NVMe. In this platform, a high write intensive Sysbench workload is injected against a MySQL database that houses 32 different tables, 10 million rows per table, for a total of 320 million rows. The NVDIMM’s are energy protected by Paper Battery technology.

In previous demonstrations, each NVDIMM has been tethered to its own energy source, making server layout and cable routing a challenge with large DIMM implementations. With Paper Battery’s introduction of a 2.5” bay mounted supply – 16 NVDIMM’s can be powered from one unit. For systems where NVDIMM counts go even higher, a PCIe mounted power source from PaperBattery can supply up to 26 NVDIMM’s. Using servers such as the SuperMicro X10 based platform, it is now possible to have high concentrations of Netlist NV4’s on board while Paper Battery’s innovation in energy sources allows for reliable, high density power. These solutions can be found at booth #305.