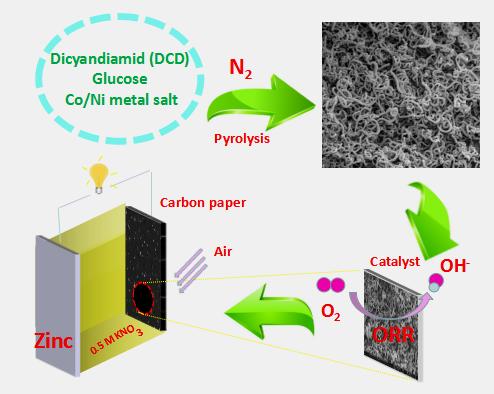 In a paper to be published in the forthcoming issue in NANO, a team of researchers from the School of Chemistry and Chemical Engineering at Hunan University of Science and Technology have proposed a novel strategy for the synthesis of non-precious metal catalysts in zinc-air batteries that do not compromise its electroactivity, affordability and stability.

As a green and sustainable energy generator, zinc-air battery has attracted great attention from researchers due to its high specific energy, high current density, low cost, and environmental friendliness. Yet it is not without its drawbacks. The slow oxygen reduction reaction (ORR) of its cathode has become an obstacle to its commercial application. One possible solution is to use platinum (Pt) and Pt-based catalysts, but its high cost and scarce availability make it less ideal. In addition, alkaline KOH (or NaOH) is generally used as the electrolyte, but it leads to the generation of carbonates (CO32-) due to the dissolution of CO2 in the electrolyte as well as the spontaneous corrosion of the anodic zinc in strong alkaline media. This has the effect of slowing down the ionic conductivity of the electrolyte and battery life. Therefore, a neutral electrolyte should be used instead. To complement this, a non-precious metal ORR catalyst that can also perform in a neutral electrolyte needs to be found.

A team of researchers from the School of Chemistry and Chemical Engineering at Hunan University of Science and Technology introduced a novel strategy for the synthesis of non-precious metal catalysts with outstanding electroactivity for oxygen reduction reaction in neutral electrolyte. They prepared Ni/Co-doped C-N hollow nanotube composite catalysts (C-N, Co/C-N, Ni/C-N and Ni-Co/C-N) by a facile pyrolysis of Ni/Co salt, dicyandiamide and glucose. A corresponding zinc-air battery was assembled in a neutral medium using the prepared sample as the catalyst of the air electrode, showing superior discharge performance and stability.

The as-synthesized Ni/Co-doped C-N composites display a curly tubular structure, resulting in a tremendous active surface area and stability. A neutral zinc-air battery utilizing a 0.5 mol·L-1 KNO3 solution has been assembled by using the prepared composite catalyst coated on carbon paper as an air cathode, and Zn plate as an anode. The battery with the cathode catalyst Ni-Co/C-N delivers the open circuit voltage of 1.13 V and the maximum power density of 65 mW·cm-2. The constant discharge current density of 50, 100 and 150 mA·cm-2 can last 202, 93 and 11 hours respectively. A stable voltage plateau appears at various discharge current densities. The neutral zinc-air battery can be repeatedly discharged after replacing the zinc anode, showing the high stability of the cathodic catalyst and broad application prospects as a mobile power source.