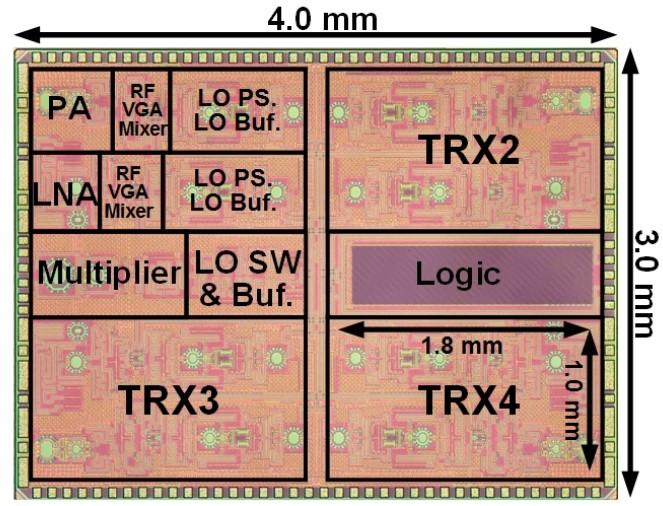 The fabricated transceiver only measures 3 mm × 4 mm and consists of four transmitting and receiving elements. The subcomponents of TRX1 are displayed.

Scientists at Tokyo Institute of Technology have designed and fabricated a tiny, but incredibly fast, reliable, and accurate 28-GHz transceiver meant for stable high-speed 5G communications. The fabricated transceiver trumps previous designs in various regards by taking a new approach for beam steering.

The importance of wireless communications is evident in modern societies, and thus, a lot of work has been done on 5G communications as it is the upcoming big step in mobile networks. The new standard for mobile networks promises data rates and speeds at least an order of magnitude higher than those of 4G (LTE), while even allowing for smaller antennas and radio frequency (RF) transceivers because of the higher frequencies used.

Most state-of-the-art transceivers designed for 5G employ RF phase shifters. Accurate phase shifting is important because it allows the transceiver to guide the main lobe of the radiation pattern of the antenna array; in other words, it is used to "point" the antenna array towards a specific direction so that both communicating ends (transmitter and receiver) exchange signals with the highest power possible. However, using RF phase shifters brings about certain complications and does not quite make the cut for 5G.

Motivated by this, a team of scientists at Tokyo Institute of Technology, led by Associate Professor Kenichi Okada, developed a 28-GHz transceiver employing a local oscillator (LO) phase shifting approach. Instead of using multiple RF phase shifters, they designed a circuit that allows the transceiver to shift the phase of a local oscillator in steps of 0.04° with minimal error. In turn, this allows for a beam-steering resolution of 0.1°, which represents an improvement of an order of magnitude compared with previous designs (meaning that antenna array can be made to precisely point towards the desired direction).

What's more, the proposed LO phase shifting approach solves another problem of using multiple RF phase shifters: calibration complexity. RF phase shifters require precise and complex calibration so that their gain remains invariant during phase tuning, which is a very important requirement for the correct operation of the device. The situation becomes worse as the array increases in size. On the other hand, the proposed phase shifting approach results in a gain variation that is very close to zero over the entire 360° range.

Amazingly, the transceiver that the research team designed was implemented in a circuit board measuring only 4 mm × 3 mm using minimal components, as shown in Figure 1. They compared the performance of their device with that of other state-of-the-art transceivers for 5G. The data rate they achieved was approximately 10 Gb/s higher than that achieved with other methods, while maintaining a phase error and gain variations an order of magnitude lower.

The results of this study are being presented at the 2018 IEEE Radio Frequency Integrated Circuits Symposium in the RMo2A session. The proposed LO phase shifting approach will hopefully help to bring forth the much-anticipated deployment of 5G mobile networks and the development of more reliable and speedy wireless communications.