Two dimensional titanium carbides, so-called MXenes, are being discussed as candidates for the rapid storage of electrical energy 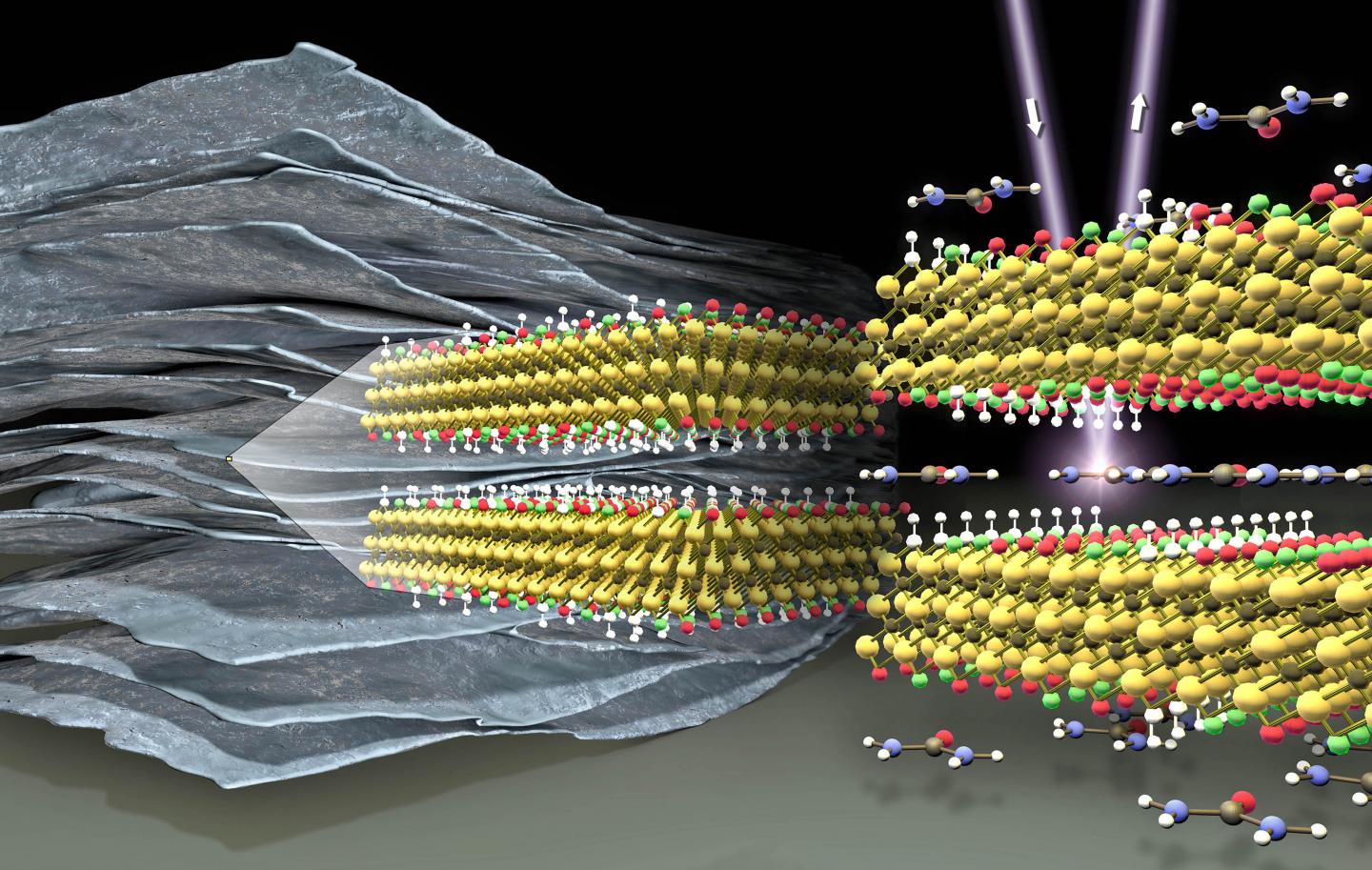 MXenes are 2D materials forming multi-layered particles (left) from which pseudocapacitors are made. Shining X-ray light on MXenes revealed changes of their chemical structure upon intercalation of urea molecules (right) compared to pristine MXenes (center).

There are different solutions for storing electrical energy: Lithium-based electrochemical batteries, for example, store large amounts of energy, but require long charging times. Supercapacitors, on the other hand, are able to absorb or release electrical energy extremely quickly - but store much less electrical energy.

A further option is on the horizon since 2011: A new class of 2D materials that could store enormous amounts of charge was discovered at Drexel University, USA. These were so-called MXenes, Ti3C2Tx nanosheets that form a two-dimensional network together, similar to graphene. While titanium (Ti) and carbon (C) are elements, Tx describes different chemical groups that seal the surface, for example OH-groups. MXenes are highly conductive materials with hydrophilic surfaces and can form dispersions resembling black ink, composed of stacked layered particles in water.

Ti3C2Tx MXene can store as much energy as batteries, but can be charged or discharged within tens of seconds. While similarly fast (or faster) supercapacitors absorb their energy by electrostatic adsorption of electrical charges, the energy is stored in chemical bonds at the surface of MXenes. Energy storage is therefore much more efficient.

In cooperation with the group of Yuri Gogotsi at Drexel University, the HZB scientists Dr. Tristan Petit and Ameer Al-Temimy have now for the first time used soft X?ray absorption spectroscopy to investigate MXene samples at two experimental stations LiXEdrom and X-PEEM at BESSY II. With these methods, the chemical environment of MXene surface groups was analyzed over individual MXene flakes in vacuum but also directly in water environment. They found dramatic differences between pristine MXenes and MXenes between which urea molecules were intercalated.

The presence of urea molecules also significantly changes the electrochemical properties of MXenes. The area capacity increased to 1100 mF/cm2, which is 56 percent higher than pristineTi3C2Tx electrodes prepared similarly. The XAS analyses at BESSY II showed that surface chemistry is changed by the presence of the urea molecules. "We could also observe the oxidation state of the Ti atoms on the Ti3C2Tx MXene surfaces by using X-PEEM. This oxidation state was higher with the presence of urea which may facilitate to store more energy" says Ameer Al-Temimy, who performed the measurements as part of his doctorate.