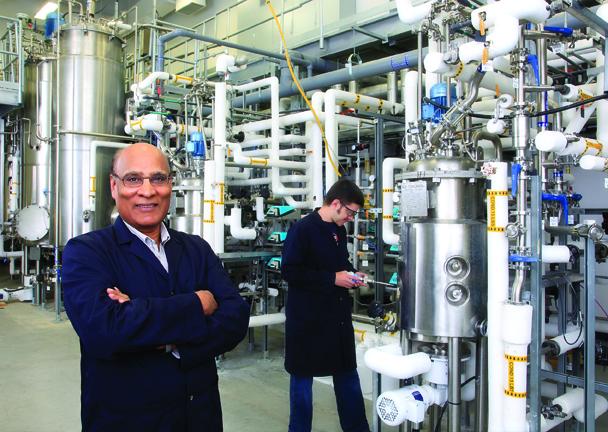 Professor Rajeshwar Dayal Tyagi, a researcher at the Institut National de la Recherche Scientifique (INRS), has developed with his team a new approach to biodiesel production that uses microbes, sewage sludge, and a biofuel byproduct.

Biodiesel has multiple environmental benefits, but the use of vegetable or animal oils raises the food vs. fuel dilemma, the risk of diverting farmland or crops for biofuels production to the detriment of the food supply. Plants have been turning to microbial biodiesel, which can be made out of glucose using microorganisms. But at $6.78/L, the conventional production process is quite expensive.

Professors Tyagi and Drogui have brought the production cost down to $0.72/L with an innovative new process. Their findings - in order to assess the costs, energy, and greenhouse gas emissions (GHG) - were published in the journal Bioresource Technology, in Feburary

The process uses sewage sludge and glycerol, a byproduct of biodiesel. Processing sludge reduces GHG. "It keeps sludge out of landfills, where it releases methane. When it's used to produce biodiesel, most of the carbon is transformed into lipids by the microorganisms," said Professor Tyagi. The process also makes it possible to reuse the glycerol without having to purify it.

From microbes to biofuel

In the first stage of fermentation, the microorganisms eat the glycerol and the sewage sludge. They accumulate oil in their bodies in the form of lipids. The INRS researchers use a bioflocculant--an organic polymer secreted by organisms--to separate the cells from the mixture and extract the lipids. That eliminates the need for centrifuges or chemical products.

In order to recover the lipids extracted from the cells, Professors Tyagi and Drogui replaced those toxic chemical products with gas. "I was filling up my car and I asked myself why not use gas to separate the lipids. We tried it in the laboratory and it worked really well. The mixture of gas and lipids floated on top of the rest of the mixture," said Professor Tyagi. The gas added for separation is also part of the final product. "Biodiesel isn't entirely composed of oil. For type B10, 10 percent of the fuel is organic and the rest is gas," he said.

The process produces biodiesel and glycerol, which could in turn be used to produce more fuel. But plants don't necessarily use the same production processes, so the glycerol, and its efficiency, may vary. Professors Tyagi and Drogui are looking to figure out how to combine these different byproducts to make the process even more cost effective.

Two post-doctoral fellows, four doctoral students, and one master's student worked on the project. Ph.D. student Lalit R. Kumar is doing his doctorate on the project, which was awarded the 2018 Project Innovation Award in the Breakthroughs in Research and Development category by the International Water Association in Tokyo.