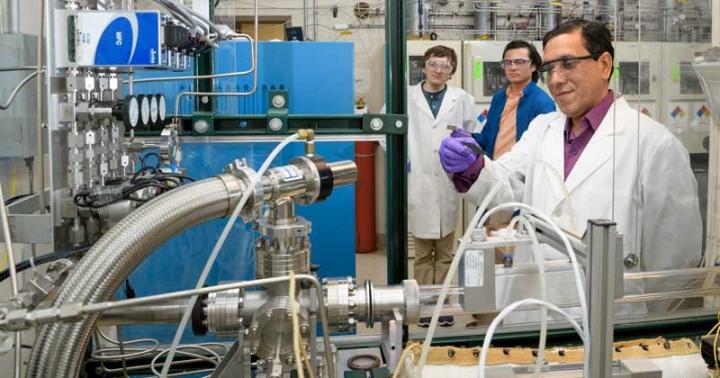 Ujjwal Das, an associate scientist at the University of Delaware's Institute of Energy Conversion, examines a silicon wafer after a thin layer of sulfur - less than 5 nanometers thick - was deposited on the surface. In the background, doctoral students Robert Theisen and Isaac Lam watch a silicon wafer emerge from the atmospheric pressure vapor treatment reactor, where it was treated with hydrogen sulfide and hydrogen selenide gases. The reactor was developed at IEC.

In their quest to improve our ability to capture and distribute the Earth's greatest potential source of power--the sun--scientists are exploring every square nanometer of solar cells, looking for new ways to improve their voltage and efficiency, while reducing costs.

The University of Delaware has a distinctive muscle in this effort in its Institute of Energy Conversion (IEC), the oldest continuously operating solar research site in the world. IEC has experts in thin-film and crystalline silicon photovoltaic science under its roof. The ideas that emerge when those experts interact can prompt new experiments, new possibilities and new solutions.

Research scientist Ujjwal Das is one of IEC's experts, specializing in addressing defects on the surface of silicon, defects that-if unaddressed-reduce voltage and current in silicon solar cells, the most familiar kind of solar technology for most consumers and the most frequently installed type of solar system in residential settings.

Now, Das and collaborators at Georgia Tech and the University of Nevada, Las Vegas, have won an $800,000 grant from the U.S. Department of Energy for a new approach to improving the efficiency of silicon solar cells in ways easily adapted for standard manufacturing processes.

Specifically, Das and collaborators are focused on improving the efficiency of Passivated Emitter Rear Cells (PERC cells, for short), which are silicon solar cells designed with special materials and varying textures on the rear side of the cell to improve efficiency. The word "passivation" describes the result of treatments that reduce recombination, a phenomenon that bumps electrons from their electricity-generation mode and into a lower level of activity, gouging cell performance.

PERC cells are a fast-growing sector of solar technology, especially because of a recent approach that uses aluminum oxide as the passivating material. Aluminum oxide is abundant and relatively cheap, but has not produced enough voltage, Das said. In addition, it only works well on one side of the cell.

Das and his collaborators have demonstrated a new approach - using the previously untested elements sulfur and selenium - that appears to work better. They don't know why or how yet. The new grant will support that study and further development of the technology.

"One objective of our novel approach is investigating whether we can use these elements, sulfur and selenium, more effectively for both surfaces," Das said. "This is still largely unknown. And there are many more relevant questions. How is it happening? Why is it happening?"

Das drew on IEC's thin-film expertise and deep knowledge of materials science to develop and prove the potential of the new approach he and his collaborators now are pursuing.

The sulfur and selenium have a certain "healing" effect on the surface of silicon, where defects emerge in the crystalline structure, he said.

"There will be other refinements," Das said. "This one will give us improved voltage. To improve the current we have to make other refinements, which is not the focus in this project. But that's where we can further improve efficiency."

Das said it was "sort of an accident" that sulfur and selenium emerged as new candidates for this work.

About six years ago, he was looking for silicon-surface passivating materials that had a crystal structure similar to silicon's.

Zinc sulfide emerged as a possibility with promising results at low temperatures, but its potential degraded at high temperatures.

Because IEC has expertise in the use of sulfur and selenium and has the expertise to use hydrogen selenide, a toxic material, Das discussed these ideas with others in the center.

A student - Hsiang-Yu "Stella" Liu - was looking for a new topic to research at the time. The sulfur passivation project seemed promising and she did the original work, Das said. Liu earned her doctorate in materials science and engineering in 2018.

They worked with IEC's Greg Henket, whose expertise is using hydrogen sulfide and hydrogen selenide reactions to make solar cells with thin-film coatings of copper, indium, gallium and selenide (CIGS).

"In this building we work on all types of thin films," Das said. "That's how we generate ideas. Sulfur and selenium are used for CIGS solar cells. What if we try some of these with silicon solar cells?"

"This is a creative solution to a problem in one technology [silicon solar cells] by using a capability we developed for a totally different kind of solar cell [a thin-film cell]," said William Shafarman, director of IEC and professor of materials science and engineering. "We are a comprehensive research center on different kind of solar cells and that enables us to have that kind of synergy. We are all looking for the most efficiency and the lowest cost. This is a new approach to that."

PERC cell efficiency now is rated at just under 22% in the manufacturing setting. Das said his team expects to show more than 22% efficiency and sees a potential for more than 25%.

Those numbers are important as researchers strive to meet the goals of DOE's Solar Energy Technologies Office. The goals, first developed in 2011, aim to bring the costs of solar electricity into competitive range with conventional sources. They met the 2020 goal of trimming the cost of utility-scale photovoltaic solar power from 28 cents per kilowatt hour in 2010 to 6 cents three years ahead of schedule - in 2017. Residential solar costs dropped from 52 cents to 16 cents in the same period, while commercial solar went from 40 cents to 11 cents. (The numbers reflect the levelized cost of energy, without state or local incentives

The 2030 goal is to reduce the utility-scale cost in half-to 3 cents.

"That's ambitious, but not overly so," Shafarman said. "It's doable. If you look at our past history, we're on that trajectory. Prices come down and then there are blips and fluctuations, but we've made incredible progress."

As other goals are met-reducing the cost of energy storage, for example-the National Renewable Energy Lab projects that solar energy could supply about half of the nation's electricity by 2050.