MIT and NREL Team develop solid-state heat engine that is over 40 percent efficiency at temperatures up to 2,400 degrees C 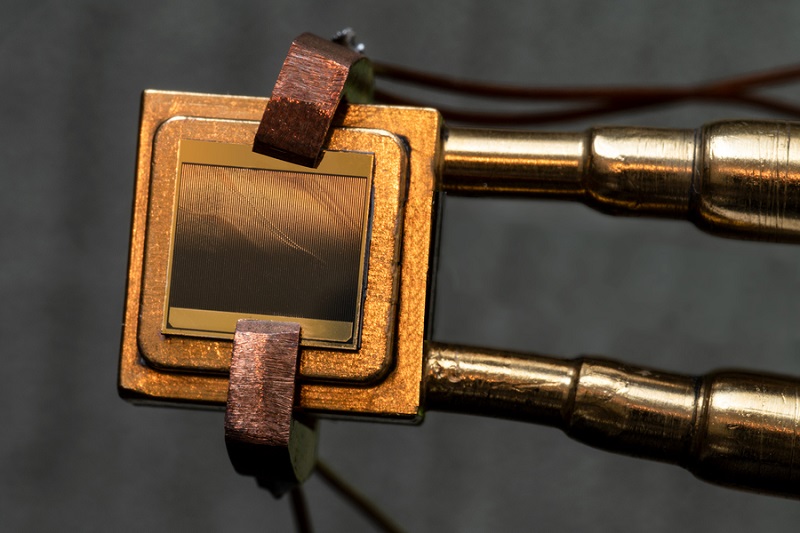 The vast majority of global electricity comes from sources of heat, such as coal, gas, nuclear energy and concentrated solar energy. Some accounts put that number as high as 90% of our total electricity production. Steam turbines have been the industrial standard for converting such heat sources into electricity. The steam turbines used to generate that energy are around 35% efficient, with the best efficiency at nearly 60% for any heat engine. Those turbines depend on moving parts, which restricts the temperatures in which they can operate. Heat sources that are over 2,000oC are just too hot for turbines with moving parts.

This causes a problem for one potential source of electricity, which could be a key technology in the storage of renewable energy. Grid-scale thermal batteries could absorb excess energy from renewable sources and store it in heavily insulated banks of hot graphite. When the energy is needed, it would then be transformed into electricity. However, the heat from the batteries such, that traditional turbines could not do the job. A new way of capturing the heat is required to bring this source of energy storage to life, preferably one without moving parts.

Now, Engineers at MIT and the National Renewable Energy Laboratory (NREL) have made progress in that direction by designing a solid-state heat engine. Demonstrations show that it can convert heat to electricity at over 40 percent efficiency — better than traditional steam turbines. The heat engine is a thermophotovoltaic (TPV) cell. Its design is similar to a solar panel’s photovoltaic cells, but it can generate electricity from a heat source of between 1,900 to 2,400oC, and dispatch the energy to a power grid. The new TPV cell was the final part of the team’s successful demonstration of the main parts of the system in separate, small-scale experiments. They will now work to integrate the parts to demonstrate a fully operational system. Then they will try to scale up the system.

The team consists of Asegun Henry, the Robert N. Noyce Career Development Professor in MIT’s Department of Mechanical Engineering, Alina LaPotin, Kyle Buznitsky, Colin Kelsall, Andrew Rohskopf, and Evelyn Wang, the Ford Professor of Engineering and head of the Department of Mechanical Engineering, along with Kevin Schulte and collaborators at NREL in Golden, Colorado. The collaborators have published their results in the journal Nature.

TPV cells could be made from semiconducting materials with a particular bandgap. If a photon with a high enough energy is absorbed by the material, it can kick an electron across the bandgap, where the electron can then conduct, and thereby generate electricity — doing so without moving rotors or blades. To date, most TPV cells have only reached efficiencies of around 20 percent, with the record at 32 percent, as they have been made of relatively low-bandgap materials that convert lower-temperature, low-energy photons, and therefore convert energy less efficiently. The new TPV design captured higher-energy photons from a higher-temperature heat source, converting energy more efficiently. The new cell uses higher-bandgap materials and multiple junctions, or material layers, compared with existing TPV designs.

The cell consists of: a high-bandgap alloy, which sits over a slightly lower-bandgap alloy, underneath which is a mirror-like layer of gold. The first layer captures a heat source’s highest-energy photons and converts them into electricity, while lower-energy photons that pass through the first layer are captured by the second and converted to add to the generated voltage. Any photons that pass through this second layer are then reflected by the mirror, back to the heat source, rather than being absorbed as wasted heat.

The research was supported, in part, by the U.S. Department of Energy.