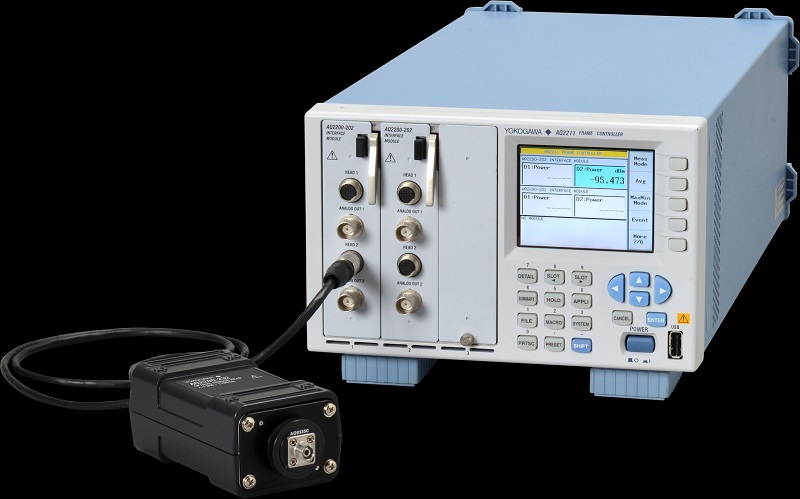 The AQ2200-232 sensor head is used in conjunction with the dual-port AQ2200-202 interface module, and is targeted at making accurate measurements in challenging applications such as power testing of laser chips in free space light, I/L curve measurement of laser-diode modules and multicore fibre measurements (with an MPO connector adapter).

Key features are a 5 mm diameter cooled detector, ideal for measurements in free space, a wavelength measurement range from 800 to 1700 nm, and a power measurement range of +15 to -90 dBm. It also offers best-in-class uncertainty of ±1.8%, high stability with constant-temperature control, and a wide single-range power range of 30 dB.

“With the launch of the new optical sensor head, Yokogawa is expanding its multi-application modular optical test platform in line with market demands for higher-speed automatic testing of optical devices in free space, which helps to reduce testing time - and hence costs - compared to fibre-coupled tests.”, says Terry Marrinan, Vice-President Sales & Marketing, Yokogawa Europe & South-East Asia: “Post-production testing of laser diodes needs to be fast because the increasing market demand requires higher quantities and cheaper products, and the fastest way to measure their output is by measuring it in free space to eliminate the time involved in connecting and disconnecting the optical fibre to each laser produced.”

Until now sensors currently available on the market were not sensitive enough to obtain high-precision test results. The sensor's reading should also be as accurate as possible because certain lasers emit low power by design (to respect international safety regulations) and their characterisation must be very precise to be sure the laser is emitting the highest possible power without breaking the relevant safety laws.

“Yokogawa recognised these challenges and have addressed them by working closely with the manufacturers of laser diodes in order to develop the AQ2200-232”, adds Terry Marrinan: “The combination of a large-diameter photo-detector surface and the 30 dB power range of the new sensor head allows it to measure signals at high resolution under optimum conditions – hence the best-in-class sensitivity and accuracy.”