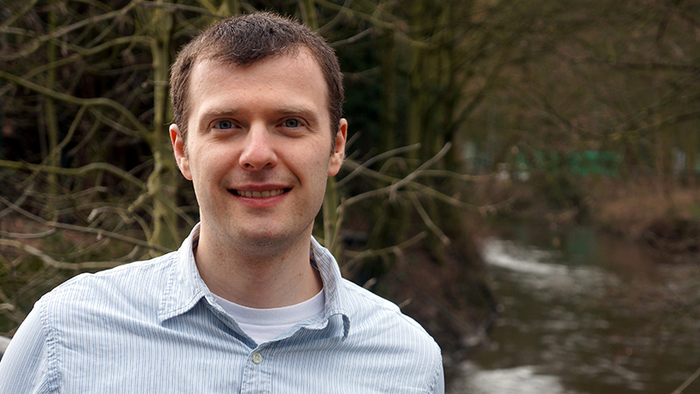 Andlinger Center for Energy and the Environment

­Organic solar cells are an emerging technology with a lot of promise. Unlike the ubiquitous silicon solar panel, they have the potential to be lightweight, flexible, and present a variety of colors, making them particularly attractive for urban or façade applications. However, continued advancements in device performance have been sluggish as researchers work to understand the fundamental processes underlying how organic solar cells operate.

Now, engineers at Princeton University and King Abdullah University of Science and Technology have described a new way to express energy loss in organic solar cells and have extended that description to make recommendations for engineering the best devices. This breakthrough could reimagine the conventional approach to constructing organic solar cells. Their work was published on November 18 in Joule.

“There was a way that energy loss in organic solar cells was traditionally described and defined. And it turns out that that description was not wholly correct,” said Barry Rand, co-author of the study and associate professor of electrical and computer engineering and the Andlinger Center for Energy and the Environment.

Rand pointed out that the traditional method for describing energy loss did not account for the presence of disorder in an organic solar cell. One type of disorder, dynamic disorder, is caused by the erratic movement of molecules at the micro level, leading to energy loss that is practically unavoidable at most temperatures. The other type, structural or static disorder, is a product of the intrinsic structures of the various materials used in an organic solar cell, as well as their arrangement inside a device.

Past research on organic solar cells that did not account for disorder in energy loss calculations yielded values around 0.6 electron volts, regardless of the device’s materials. But when Rand and his team incorporated disorder into the way they calculated energy loss and tested various devices, they found that the level of disorder played an important role in determining the overall energy loss of an organic solar cell.

After demonstrating that increasing disorder causes energy loss to sharply increase in devices, the researchers were able to make recommendations for materials that minimize disorder and therefore lead to more efficient devices. Since scientists can choose the materials they use as well as how to arrange them in an organic solar cell, they have some control over the level of structural disorder in a given device.

“If you have anything in between, some heterogeneity in which parts of a film are slightly crystalline and some parts are amorphous, that's when you lose the most energy,” Rand said.

This finding breaks with convention, as researchers previously believed that some level of heterogeneity in solar cell mixtures was beneficial for overall performance. But because Rand’s team found that heterogeneous device mixtures had high levels of disorder and lost significant amounts of energy, he said that their discovery could provide new focus for researchers as they pursue more efficient organic solar cells.

“Heterogeneity has often been the focal point of devices. Some level of crystallinity was thought to be beneficial. But it turns out that that’s not what we saw,” said Rand. He pointed out that many of the top-performing organic solar cells today are composed of highly amorphous films, and suggested that with existing technologies, completely amorphous mixtures are more pragmatic than completely crystalline ones.

Although his team’s research primarily sought to understand the science behind organic solar cells, Rand is hopeful that others can use their work to build more efficient devices and ultimately reach new performance benchmarks for this promising solar technology.

“This discovery is another aspect of organic solar cells that we can add to what we already know, which will help us improve their efficiency going forward,” Rand said.

The article, “Quantifying the Effect of Energetic Disorder on Organic Solar Cell Energy Loss,” was published in Joule on November 18. Besides Rand, authors include Saeed-Uz-Zaman Khan, a former graduate student in electrical and computer engineering who is now at ASML; and Manting Gui of Princeton University; and Jules Bertrandie, Anirudh Sharma, Wejdan Alsufyani, Julien F. Gorenflot, Frédéric Laquai, and Derya Baran of King Abdullah University of Science and Technology. Support for the research was provided by the U.S. Department of Energy, Office of Basic Energy Sciences and King Abdullah University of Science and Technology Office of Sponsored Research.