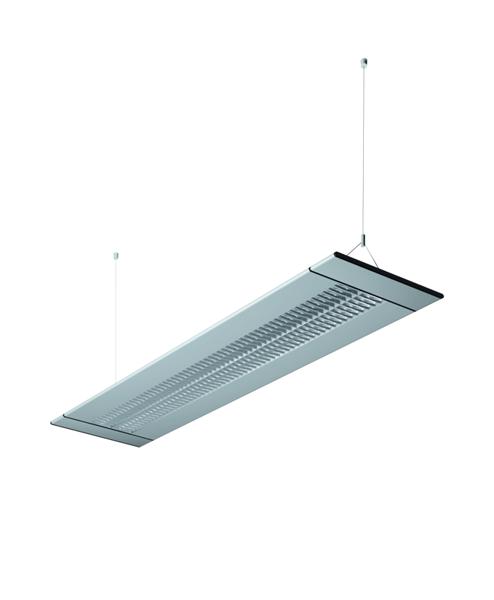 The new Apollon II luminaire ensures optimal lighting conditions in the workplace and is optically appealing through its premium design.

OSRAM now offers Apollon II, for good lighting and a high-quality workplace. The luminaire is characterised by its minimalist design. Constructed from brushed aluminium, it is designed for using T5 fluorescent lamps. Apollon II is available in a "Basic" and "Pro" version. Both variants fulfil the requirements of DIN EN 12464-1 and the EnEV 2009 energy saving directive. The "Pro" version is dimmable and can be easily integrated into DALI light management systems. With Apollon II, OSRAM provides companies and planners with an elegant, highly-efficient luminaire for offices, hospitals or schools. Optically, the brushed aluminium finish and low height stand out. The "Basic" and "Pro" versions differ in aspects including choice of lamp and efficiency: In the basic version two 28W HE fluorescent lamps can be employed, joined by two 54W HO fluorescent lamps in the Apollon II Pro. Special louvres on the "Pro" version enable up to 94 percent of the light to be reflected outwards. Efficiency for modern buildings Apollon II satisfies all requirements of DIN EN 12464-1, the European standard for the lighting of workplace interiors, which has to be taken into account in planning, as well as the current EnEV 2009. The Basic version is cheaper, but can only be switched on and off. The Pro version can also be integrated into the DALI light management system. This enables light to be controlled as required, benefiting both the purse and the environment. Apollon II is therefore a particularly economical solution which can be installed individually or in line as ceiling-mounted or pendant luminaire. ABOUT OSRAM OSRAM (Munich) belongs to the Industry Sector of Siemens and is one of the two leading light manufacturers in the world. In the 2010 financial year, it achieved a turnover of €4.7 billion. OSRAM is a high-tech company in the lighting sector and 70 percent of sales come from energy-efficient products. The company, which is very much internationally oriented, has more than 40,000 employees worldwide, supplying customers in around 150 countries worldwide (30 September). www.osram.com