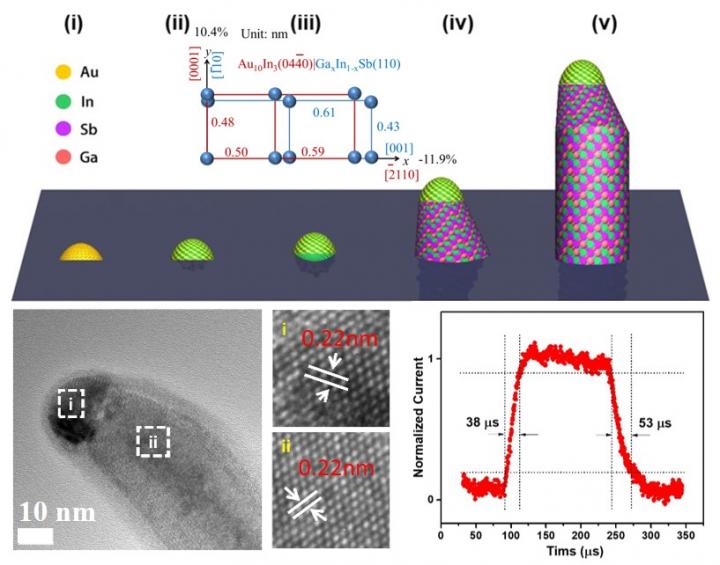 Chinese scientists have synthesized new nanowires with high carrier mobility and fast infrared light (IR) response, which could help in high-speed communication. Their findings were published in Nature Communications on April 10th.

Nowadays, effective optical communications use 1550 nm IR, which is received and converted into an electrical signal for computer processing. Fast light-to-electrical conversion is thus essential for high-speed communications.

According to quantum theory, 1550 nm IR has energy of ~ 0.8 eV, and can only be detected by semiconductors with bandgaps lower than 0.8 eV, such as germanium (0.66 eV) and III-V compound materials such as InxGa1-xAs (0.35-1.42 eV) and InxGa1-xSb (0.17-0.73 eV). However, those materials usually have huge crystal defects, which cause substantial degradation of photoresponse performance.

In this study, the In0.28Ga0.72Sb nanowires (bandgap 0.69 eV) showed a high responsivity of 6000 A/W to IR with high response and decay times of 0.038ms and 0.053ms, respectively, which are some of the best times so far. The fast IR response speed can be attributed to the minimized crystal defects, as also illustrated by a high hole mobility of up to 200 cm2/Vs, according to Prof. Johnny C. Ho from CityU.

The minimized crystal defect is achieved by a "catalyst epitaxy technology" first established by Ho's group. Briefly, the III-V compound nanowires are catalytically grown by a metal catalyst such as gold, nickel, etc.

"These catalyst nanoparticles play a key role in nanowire growth as the nanowires are synthesized layer by layer with the atoms well aligned with those in the catalyst," said HAN Ning, a professor at IPE and senior author of the paper.