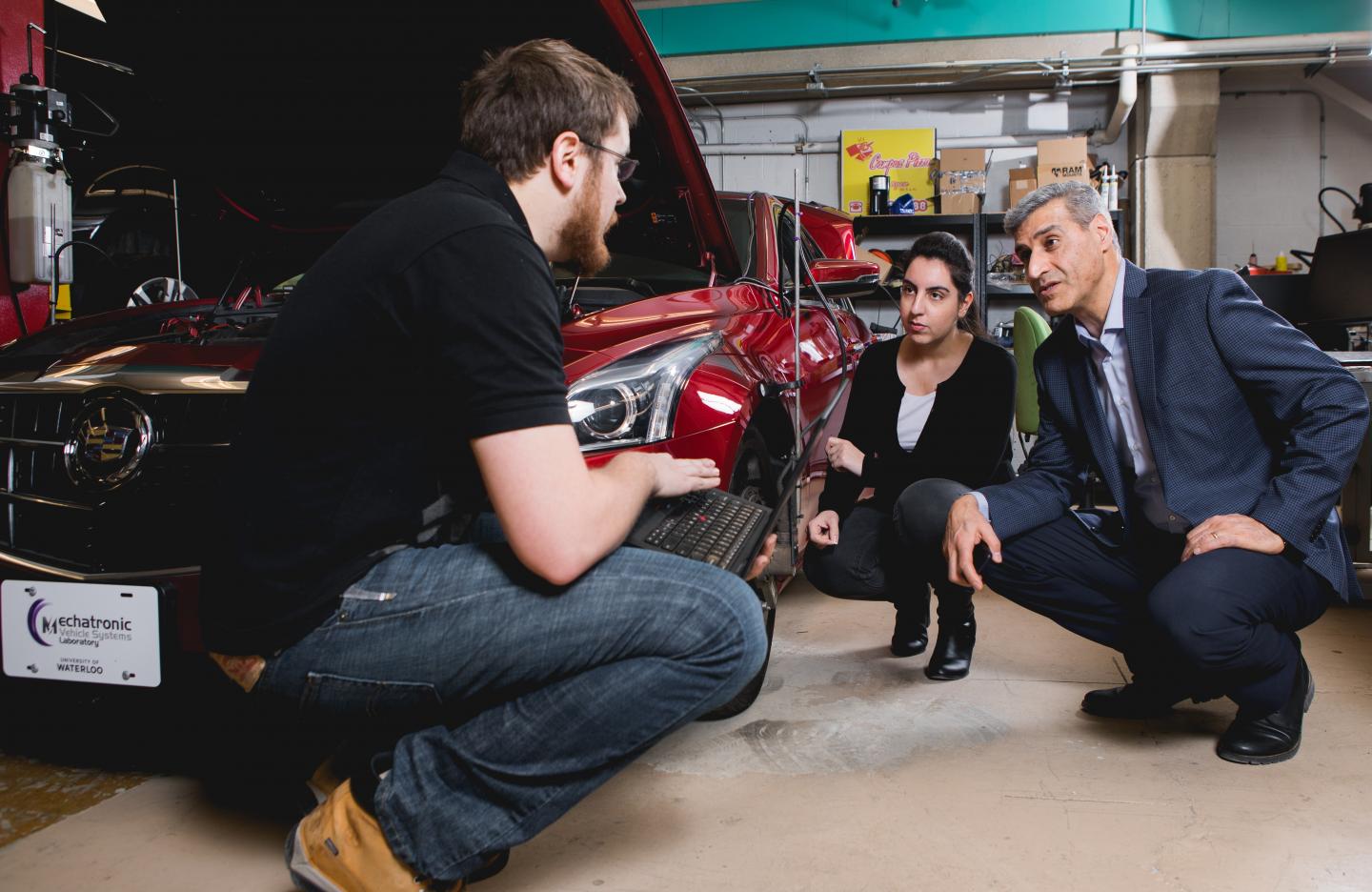 This is a photo of new valve technology that promises cheaper, greener engines, Amir Khajepour, a professor of mechanical and mechatronics engineering at Waterloo, in his lab working with his students.

Technology developed at the University of Waterloo reliably and affordably increases the efficiency of internal combustion engines by more than 10 per cent.

The product of a decade of research, this patented system for opening and closing valves could significantly reduce fuel consumption in everything from ocean-going ships to compact cars.

"This method has the potential to bring the well-established benefits of a fully variable valve system out of the lab and into production engines because cost and complexity aren't issues," said Amir Khajepour, a professor of mechanical and mechatronics engineering at Waterloo.

Intake and exhaust valves in internal combustion engines are typically controlled by cam mechanisms that do not allow the timing of their opening and closing to be varied.

The technology developed by Waterloo researchers replaces cams with hydraulic cylinders and rotary hydraulic valves that enable fully variable timing as the speed and torque of an engine change.

This ability to specifically time the opening and closing of valves according to engine operation is a key to increasing fuel efficiency, reducing both costs and greenhouse gas emissions.

"If you think about an ideal solution, it is to make the motion of the valve completely controllable," said Khajepour, who is also a Canada Research Chair and director of Waterloo's Mechatronic Vehicle Systems Lab. "That gives you infinite options to work with."

Although other systems to vary valve timing already exist, they are limited to use in experimental engines in laboratories due to their high cost and complexity.

The technology developed and tested at Waterloo is much simpler and far less expensive, paving the way for its use in engines for power generation, mining vehicles, the trucking industry and a host of other applications, including the consumer automotive market.

Khajepour said an affordable, reliable method to vary valve timing in internal combustion engines could substantially reduce our carbon footprint during the transition to cleaner electric powertrains over the next few decades.

"We should be able to easily improve efficiency by over 10 per cent, which is significant," he said.

The study on optimizing the hydraulic variable valve system, which builds on research that began in 2008, appears in the journal Mechatronics.