Testing tools must support those working outside their “comfort zones”

Since the recession of 2008–2009, many R&D organizations, including those within the green power and related industries, have had to become leaner and more efficient, just like their products. In addition to all the other cutbacks they’ve made, they are employing fewer dedicated test engineers with in-depth T&M training and experience, due to the compression of new product development schedules, the shift toward lean methods, and smaller design groups both in developed and emerging regions. Inevitably, that means there are fewer engineers on staff who are equipped to focus on ensuring test accuracy and efficiency and to support others on the team. For those who remain, that means new responsibilities related to characterization and test are being thrust upon them, tasks for which some are finding themselves somewhat unprepared to meet expectations.

These employees often find themselves forced to work far outside their comfort zones, that is, in areas others than those in which they were educated and/or acquired significant on-the-job training. For example, as power systems and supplies have grown more sophisticated, the people building and maintaining them increasingly need to use types of equipment that were previously used only by digital design engineers. Or, consider the designers of medical devices such as powered prostheses, which employ electric motors and drive controllers. Although these designers often hold degrees in biomedical engineering, they might need assistance on the finer points of characterizing these devices. Some of today’s high precision instrumentation users may not have backgrounds in electrical engineering but instead trained in a different discipline, such as materials science, mechanical engineering, quality control, electrochemistry, physics, etc.

Here are some examples of these types of non-traditional test instrument users in fields related to power systems design:

•Electrochemists involved in the design of new fuel cells; photovoltaic materials, cells and modules; lithium-ion batteries; and other power generation and conversion devices

In order to do their jobs, these non-traditional users need tools that can deliver accurate measurements quickly and easily without requiring them to navigate their way through the complexities common in traditional analog and digital instrument interfaces. To address the needs of this growing segment of the market, instrumentation manufacturers are beginning to employ some interface strategies from the consumer electronics world, such as smartphones and tablet computers.

Users Who Wear Many Hats

For engineers taking on multiple new test and measurement responsibilities, minimizing the time and effort required to get accurate, usable test and measurement results is critical. Time-pressured users simply don’t have the leisure or the inclination to refer to the manual every time they need to change a setup or make a measurement. They want setting up, acquiring, and evaluating the results from all measurements to be virtually instantaneous; if they have questions, they want answers at their fingertips, not buried in a manual. To address the inherent challenges of this new category of users, instrumentation designers are beginning to offer touchscreen-based precision test instruments that are intuitive to understand and use. When problems arise, these interfaces offer on-line help and debug capabilities, minimizing the need for manuals or external guidance (see Figure 1). 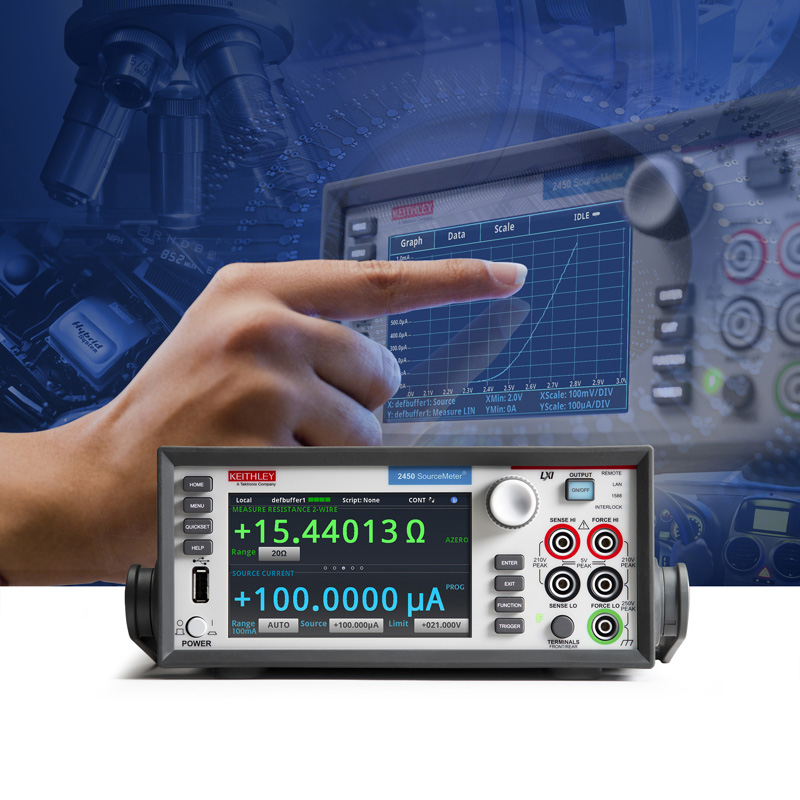 Touchscreen interfaces offer multiple advantages for test and measurement instrumentation. Anyone who owns a smartphone (as do more than half of all American adults) or a tablet computer (roughly one-third of all American adults) already knows how to control a touchscreen device. Touchscreens quite literally put interactive control at the user’s fingertips. Rather than forcing engineers who are juggling new responsibilities to configure measurement functions using cumbersome, multilayer menu structures and confusing multi-function buttons, the newest benchtop test and measurement instruments with touchscreen GUIs offer the simplicity of flatter menu structures. Screen “clutter” is minimized by displaying only the options relevant to a specific function (see Figure 2). 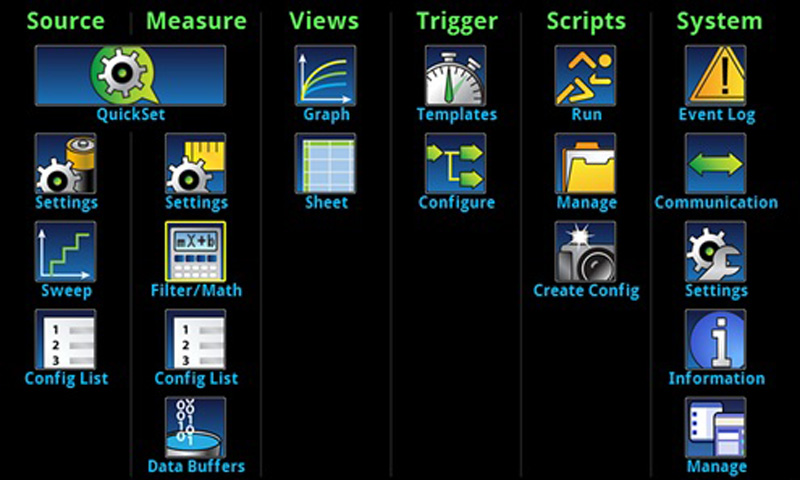 By replacing complicated multifunction buttons and complex menu structures with on-screen icons, touchscreen interfaces can help engineers to find and access the measurement configuration and display functions they need quickly. By minimizing the need for extraneous buttons and options and showing only those controls needed to perform the function desired, touchscreens can greatly simplify the user experience for test instruments just as they have done for mobile consumer devices. In addition to presenting simple graphical icons for configuring measurement settings quickly, touchscreens offer the user the flexibility of displaying test results numerically and/or graphically.

As their name implies, source measure units (SMUs) combine current and voltage sourcing and measuring functions in a single instrument, as well as sweep capabilities. Although SMUs are widely recognized for their ability to force and measure I-V curves on linear and non-linear electronic devices like semiconductors, the highly configurable resistance measurements they offer can be critical in power systems design applications.

One of the most useful capabilities of Keithley’s Model 2450 SourceMeter SMU Instrument for power systems design applications is the controlled source ohms mode. By default, this mode provides DMM-like operation, forcing a constant current through the unknown resistance and measuring the resulting voltage and computing the resistance value (see Figure 3). Built-in QuickSet modes allow configuring basic functions, including resistance measurements, with a single touch. SMUs can measure resistance using the 4-wire method, which eliminates offsets due to contact and lead resistances. 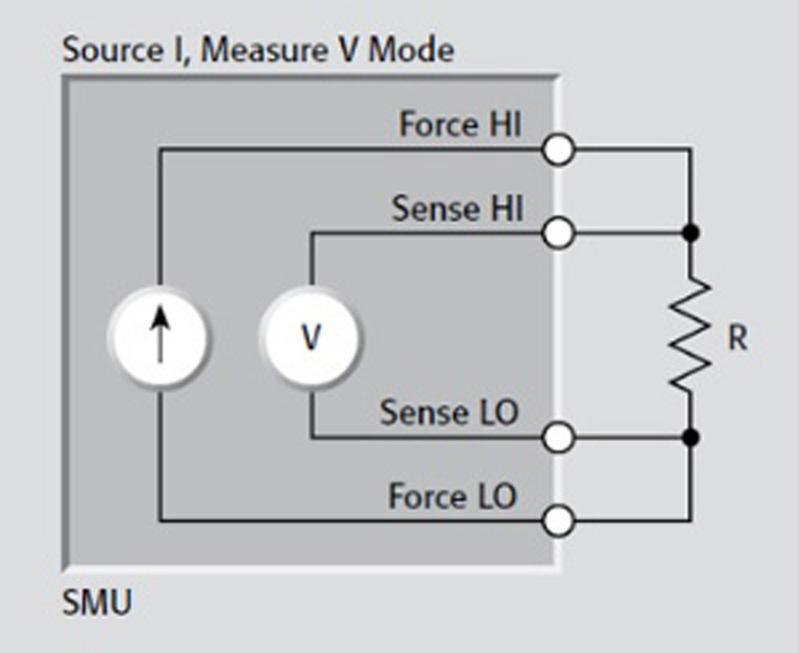 Figure 4 shows measurement results when the instrument is in 4-wire ohms mode, on the 2Ω range (auto-range with a 4-wire short installed), sourcing 100mA of current. Noise filtering, relative measurements, NPLC (number of power line cycles, which allows adjusting the tradeoff between speed and accuracy) and measurement resolution functions can be accessed via the on-screen controls.  To minimize complexity, controls for functions that aren’t relevant to a specific mode of operation don’t appear on the bottom “swipable” control panel. 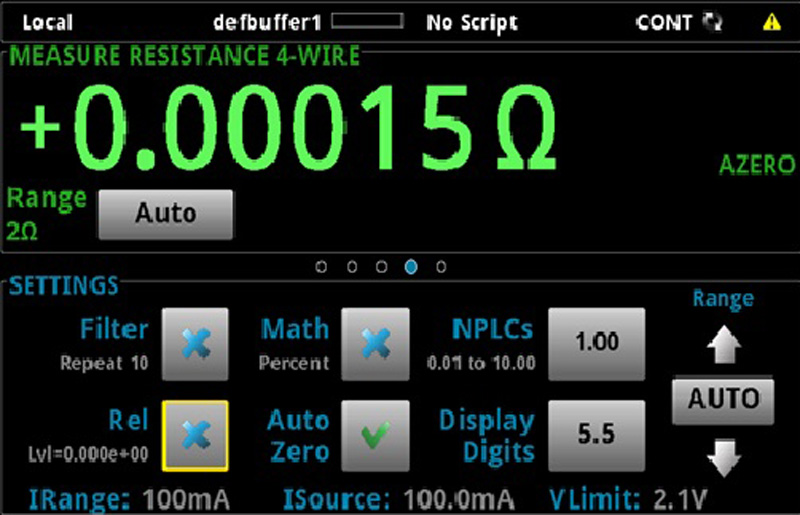 Figure 4. All the controls needed to configure a measurement function are accessible through the same screen

Sub-milliohm resistance measurements are often required in applications such as RDS(ON) measurements for power MOS semiconductors, precision current shunt measurements for current sensing circuits, switch and relay resistance measurements, etc. SMU instruments with very low source noise and extended low voltage measure range provide the low ohms performance power switching and monitoring applications demand. An offset compensation mode, which cycles the current source on and off and captures the difference in voltage across the unknown resistance with and without the current on, is useful for cancelling any thermoelectric EMFs that might create apparent resistance errors at low levels. A manual ohms mode provides direct control over the instrument’s source and measure subsystems for applications that require setting the source current to a specific value.