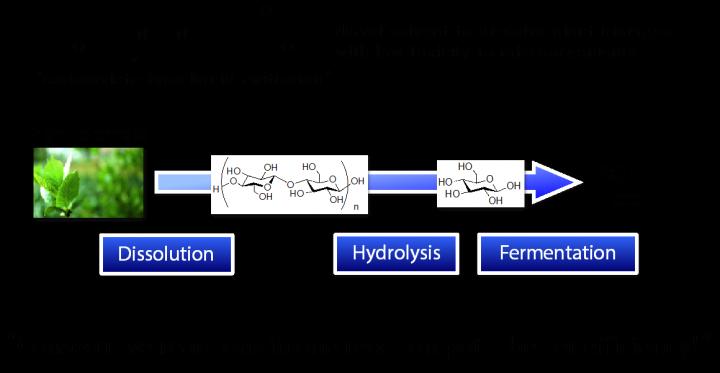 After dissolving plant biomass by the novel solvent, carboxylate-type liquid zwitterion, hydrolysis and fermentation were consecutively carried out in one reaction pot for conversion into ethanol.

The first-generation biofuel, industrialized, ethanol, is produced from foodstuffs like maize, and thus poses great concern about a possible future shortage of food. It is therefore necessary to produce ethanol from non-food biomass like weeds, waste paper, paper cup, etc. (second-generation biofuel ethanol). Solvents needed for the production of second-generation biofuel ethanol known so far are highly toxic to microorganisms. In order to remove such highly toxic solvents, complicated processes are necessary, such as washing with water, separation by centrifugation, compression, etc. As a result, the energy recovered in the ethanol so produced is less than that required to produce it, i.e., there is a negative energy balance (more production of ethanol imposes more load on the environment). It was considered impossible to solve this problem, since a harsh solvent was needed to break down recalcitrant plant materials like cellulose, while such a harsh solvent would kill microorganisms (with fragile and very vulnerable cell membranes) that play essential roles in the fermentation necessary for producing ethanol.

With Escherichia coli that can produce ethanol, fermentation ability was examined and revealed to be almost maximal in 0.5 mol/L carboxylate-type liquid zwitterion with a final ethanol concentration of 21 g/L. On the other hand, the same experiment with the ionic liquid produced only 1 g/L ethanol. Thus, fermentation in the presence of the carboxylate-type liquid zwitterion produced 21 times more ethanol than that using the ionic liquid.

In another experiment, bagasse was used as a starting plant biomass for ethanol production without washing/separation processes. Fermentation in the presence of the carboxylate-type liquid zwitterion produced 1.4 g/L ethanol, while no ethanol was obtained with the ionic liquid due to its high toxicity (Figure 2).

With these experimental results, it is shown that, using the carboxylate-type liquid zwitterion, plant biomass could be converted into ethanol in a single reaction pot without washing/separation processes. This should be a big step forward in the production/utilization of second-generation biofuel ethanol through reducing large amounts of energy input.

Furthermore, a lot of attention has been attracted by the unique characteristics of the carboxylate-type liquid zwitterion, and three international collaborations are currently going on, one of which is with Rutgers University, U.S.A.