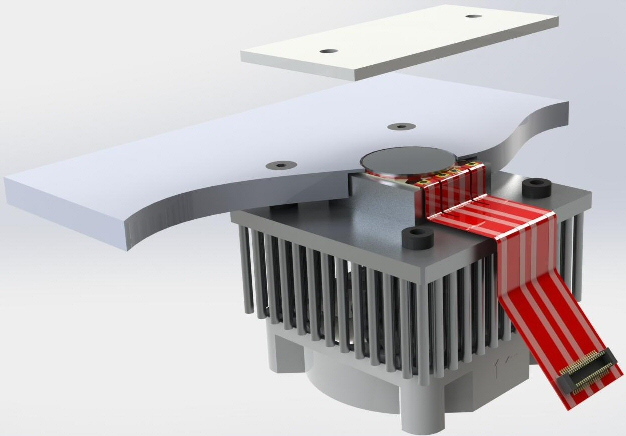 Nextreme Thermal Solutions has announced a new reference design for a compact PCR (polymerase-chain-reaction) thermal cycler for field-level DNA amplification. The small size and fast response time of Nextreme's embedded thin-film eTEC thermoelectric modules enable a new generation of thermal cyclers that feature significantly shorter throughput times, smaller sample sizes, and reduced footprint for promoting real-time testing in healthcare, forensics, and food safety. PCR is a technique widely used in molecular biology to produce millions of copies of a specific DNA sequence. PCR-based testing is used in the diagnosis of hereditary diseases, the identification of genetic fingerprints, and the detection and diagnosis of infectious diseases. PCR uses thermal cyclers to alternately heat and cool a DNA sample based on a predefined series of temperature steps to facilitate the amplification of the DNA. Typical thermal cyclers used in laboratory settings consist of a metal block with 96 wells that hold plastic vials holding the PCR reaction mixtures. The instrument typically uses thermoelectrics to control the temperature of the entire block and thus all samples simultaneously. The amplification process often takes two hours to complete. A new market for field-level, point-of-service PCR is evolving that requires amplification of smaller sample sizes much more rapidly. The Nextreme thermal cycler provides small, single-well systems with rapid, programmable control to expedite the amplification process and enable point-of-service systems. Standard PCR thermal cyclers have temperature ramp rates of up to 5 °C/s. In contrast, the Nextreme thermal cycler design is capable of producing up to a 25-°C/s temperature ramp in a 50-μL sample—five times faster than standard cyclers. Much faster ramp rates are possible from samples as small as 5 μL. Industry experts experts expect the global PCR products market o grow from nearly $5 billion in 2010 to nearly $8 billion by 2015, at an estimated CAGR of 9.9% from 2010 to 2015. The instruments segment reached $1.7 billion in 2010 and is expected to grow to nearly $2.7 billion at a CAGR of 9.6% from 2010 to 2015. Much of this growth stems from the need for thermal cyclers to become more portable, promoting real-time testing by bringing the testing to the event such as testing bio-pathogens or DNA identification in the field rather than transporting samples to the lab. "Our technology can enable a new generation of compact thermal cyclers for equipment manufacturers that lower the barriers-to-entry and increase opportunities for differentiation," said Bob Collins, Nextreme's vice president of business development. "Nextreme has conducted rigorous reliability tests on the eTEC family of thermoelectric modules in terms of mechanical shock, thermal storage, and power cycling," added Collins. "In all cases, the results strongly indicate that the modules are highly reliable for use in PCR-thermal-cycling applications. Nextreme offers several thermoelectric coolers for thermal cycling applications. Nextreme offers thermal modeling, design, and engineering services to deliver fully-optimized PCR-thermal-cycling components, modules, and subsystems. Modules are available for ordering now. Services pricing is available upon request. Nextreme PCR deeplink