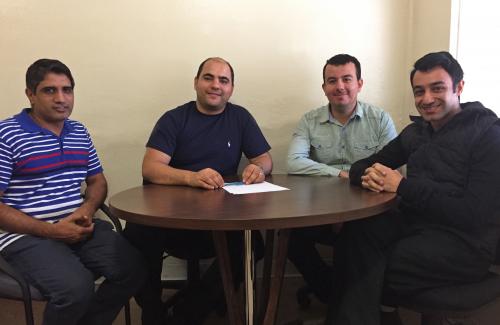 About 200,000 Americans have pacemakers implanted each year, and a College of Engineering professor at New Mexico State University is working on a mechanism to increase the longevity of the devices. Abdessattar Abdelkefi, mechanical and aerospace engineering assistant professor, is leading a project that designs broadband low-frequency piezoelectric energy harvesters to help power pacemakers.

An energy harvester is a device that converts wasted mechanical vibrations to electrical energy, for a pacemaker, it uses heartbeat vibrations to power a rechargeable battery.

“Our idea is to replace a portion of the battery area with the harvester, which will continuously charge a smaller battery,” Abdelkefi said.

The energy harvester would help patients avoid surgeries to replace batteries, reducing both health risks and costs. Abdelkefi said he hopes that the energy harvester could cut the number of pacemakers implanted each year in half.

“My objective is to help every person live as long as possible.”

This project is a collaboration with Virginia Tech, where Abdelkefi’s work on energy harvesters began with a cell phone project in 2013 as a postdoc. Abdelkefi’s team includes Hichem Abdelmoula, NMSU Ph.D. student, Nathan Sharpes and Heyon Lee, Virginia Tech Ph.D. students, and Shashank Priya, the co-principal investigator from Virginia Tech. Currently, the team is working on analytical and computational modeling to determine the optimum shape of energy harvester to test in experiments.

Abdelkefi originally began work on an energy harvester for cell phones because he didn’t like charging his phone every night.

“In addition to powering the pacemaker with heartbeats, we will power cell phones from walking and jogging,” he said. “The good thing for pacemakers is the required energy is one microwatt so it’s very easy to get this amount of power. For cell phones it needs more power.”

While working on the cell phone project, Abdelkefi and his colleagues invented an energy harvester that was patented with the Samsung Electronics Company earlier this year.

In addition to a patent, Abdelkefi and his team have published multiple articles on energy harvesters in many journals including Applied Physics Letters, Smart Materials and Structures, and Journal of Intelligent Material Systems and Structures.

While the current project involves implantable devices, Abdelkefi said a proposal is in the works for energy harvesting for wearable systems such as cochlear implants or insulin pumps.