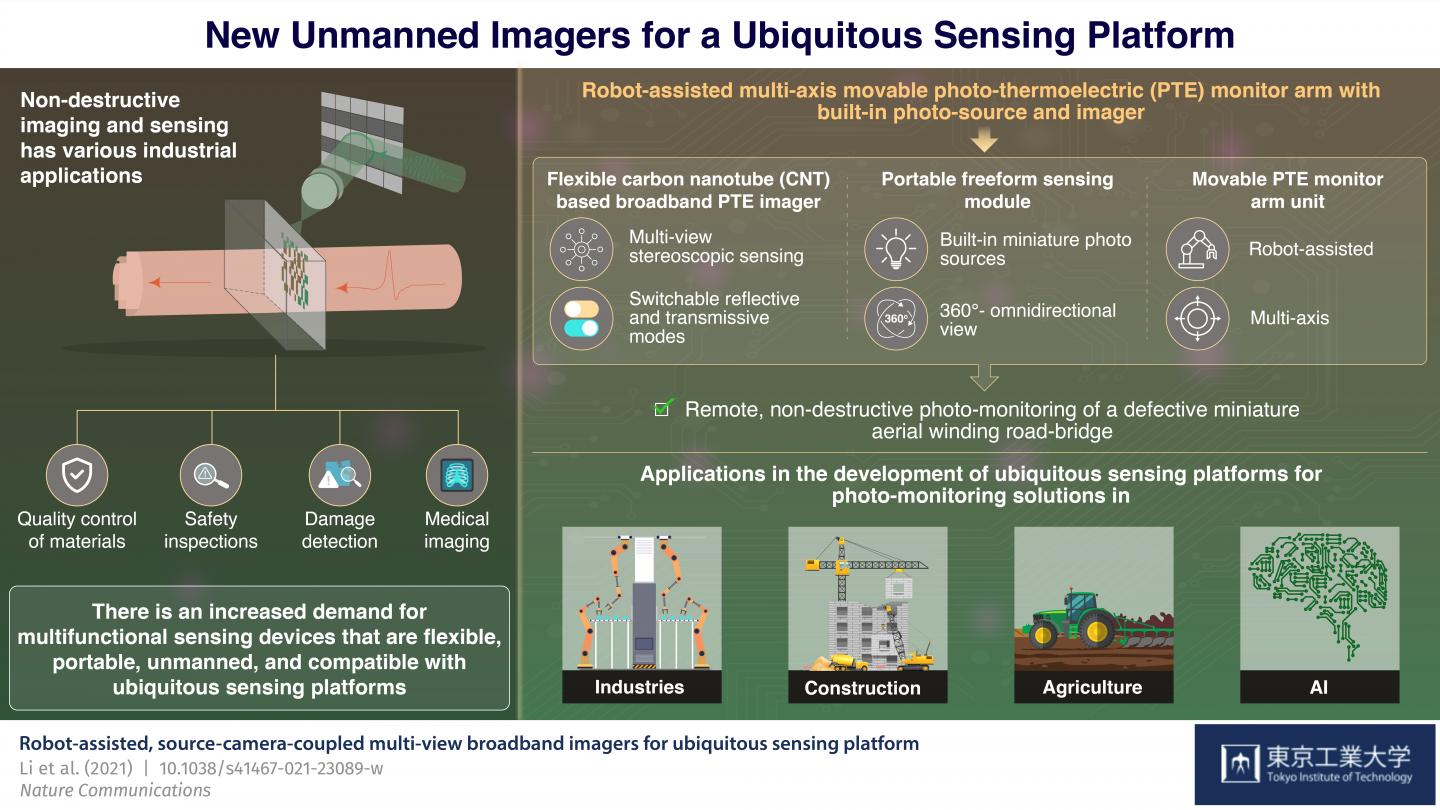 One of the key aspects of academic and industrial research today is non-destructive imaging, a technique in which an object or sample is imaged (using light) without causing any damage to it. Often, such imaging techniques are crucial to ensuring safety and quality of industrial products, subsequently leading to growing demands for high-performance imaging of objects with arbitrary structures and locations.

On one hand, there has been tremendous advancements in the scope of non-destructive imaging regarding the region of electromagnetic (EM) spectrum it can access, which now ranges from visible light to as far as millimeter waves! On the other, imaging devices have become flexible and wearable, enabling stereoscopic (3D) visualization of both plane and curved samples without forming a blind spot.

Despite such progress, however, issues such as portability of sensing modules, cooling-free (free of bulky cooling equipment) device operation, and unmanned or robot-assisted photo-monitoring remain to be addressed. "The transition from manned to robotic inspection can make operations such as disconnection testing of power-transmission lines and exploring cramped environments safer and more sustainable," explains Prof. Yukio Kawano, from Tokyo Tech and Chuo University, who researches extensively on terahertz (THz) waves (EM waves with frequency in the terahertz range) and THz imaging.

While multiple studies in the past have explored systems equipped with one of the aforementioned modules, their functional integration has not yet been attempted, limiting progress. Against this backdrop, in a recent study published in Nature Communications, Prof. Kawano and his colleagues from Tokyo Tech, Japan, developed a robot-assisted, broadband (using a wide range of frequencies) photo-monitoring platform equipped with a light source and imager that can operate in a location-independent manner and switch between reflective and transmissive sensing.

In their proposed module, the scientists made use of physically and chemically enriched carbon nanotube (CNT) thin films to act as uncooled imager sheets that employed "photothermoelectric effect" to convert light into electric signal via thermoelectric conversion. Due to their excellent absorption properties over a wide range of wavelengths, CNTs showed a broadband sensitivity. Moreover, the imager sheet allowed for a stereoscopic sensing operation in both reflective and transmissive modes, thereby enabling inspections of several curved objects such as beverage bottles, water pipes, and gas pipes. By detecting the local changes on signals, scientists were able to identify minuscule defects in these structures otherwise invisible. Further, by employing multi-frequency photo-monitoring, ranging between THz and infrared (IR) bands, the scientists were able to extract both the outer surface and inner surface features using IR and THz light, respectively.

Finally, they achieved a 360°-view photo-monitoring using a light-source-integrated compact sensing module and implemented the same in a multi-axis, robot-assisted movable-arm that performed a high-speed photo-monitoring of a defective miniature model of a winding road-bridge.

The results have spurred scientists to consider the future prospects of their device. "Our efforts can potentially provide a roadmap for the realization of a ubiquitous sensing platform. Additionally, the concept of this study could be used for a sustainable, long-term operable, and user-friendly Internet of Things system of a sensor network," observes an excited Prof. Kawano.

This study, indeed, takes sensing technology to the next level!