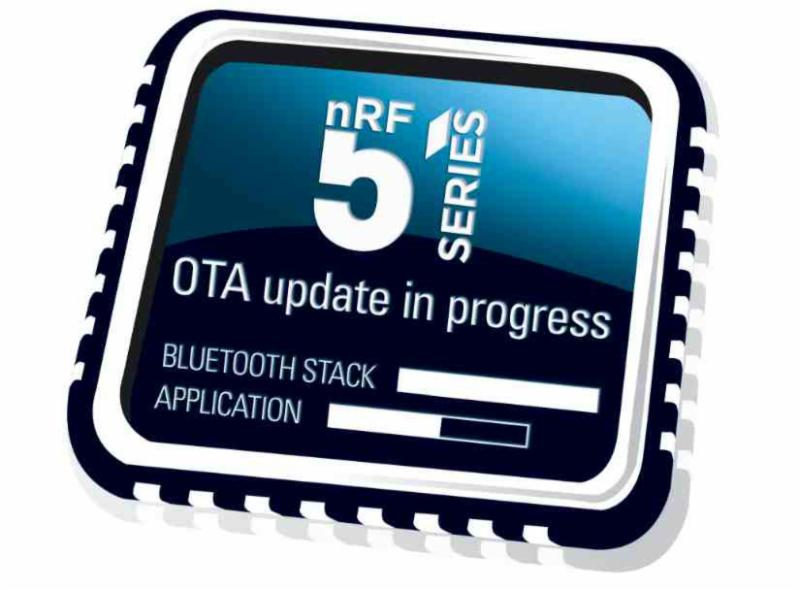 The nRF51 Series SoCs' flash-based architecture and the S110 SoftDevice's OTA-DFU feature support a flexibility to firmware upgrades that is not possible on alternative static ROM/OTP-based ULP wireless SoCs. Now the nRF51822 and nRF51422 SoCs' stacks and application firmware can be upgraded quickly and easily using the devices' own wireless link. The OTA-DFU feature allows complete application and protocol stack upgrades and is not limited to just partial updates and patching. When using OTA-DFU, firmware upgrades can be delivered in a variety of ways depending on the chip's use case. (Nordic provides an iOS or Android smartphone app that demonstrates this flexibility.)
In addition, the S110 SoftDevice v7.0 is now able to handle concurrent multiprotocol Bluetooth low energy and 2.4GHz RF proprietary communication. During concurrent protocol handling, Bluetooth low energy operates from the S110 SoftDevice itself while the 2.4GHz proprietary protocol runs from the application space. The S110 SoftDevice manages all radio scheduling through application programming interfaces (API).

Concurrent multiprotocol protocol software handling opens up a range of possibilities for designers while also benefiting end users because they will no longer be forced to make hard choices between these two technologies when purchasing wireless accessories or peripherals. Concurrent Peripheral/Broadcaster roles is another new feature of the latest S110 SoftDevice. This feature allows the nRF51 series SoC to broadcast data while in a connected state.

Since Nordic's nRF51 Series' launch in June 2012, SoftDevice performance has been increasingly enhanced by successive revisions. The SoftDevice is a key element of the unique software architecture of Nordic's award-winning nRF51 Series SoCs. The architecture cleanly separates the Bluetooth low energy, ANT or 2.4GHZ proprietary SoftDevice from the developer's application code removing the need for the engineer to struggle with integration of their code as part of a vendor-imposed application development framework. The separation ensures the stack and application operate independently, but communicate when necessary via event-driven APIs.

This v7.0 release of the S110 is the biggest improvement to this software stack yet," says Thomas Bonnerud, Nordic Semiconductor's Director of Product Management. "In particular, the addition of OTA-DFU is a real boost to wireless device manufacturers because end products such as a keyboard, fitness monitor, or a smart-home sensor can now be updated in the field in a simple, secure, and reliable way using the nRF SoC's own wireless link. In other sectors manufacturers and users have come to expect this functionality, but Nordic Semiconductor is the first company to bring complete over-the-air updates to ULP wireless SoCs." S110 SoftDevice v7.0 alpha release is available from the week of April 14, with full production release available in May 2014.