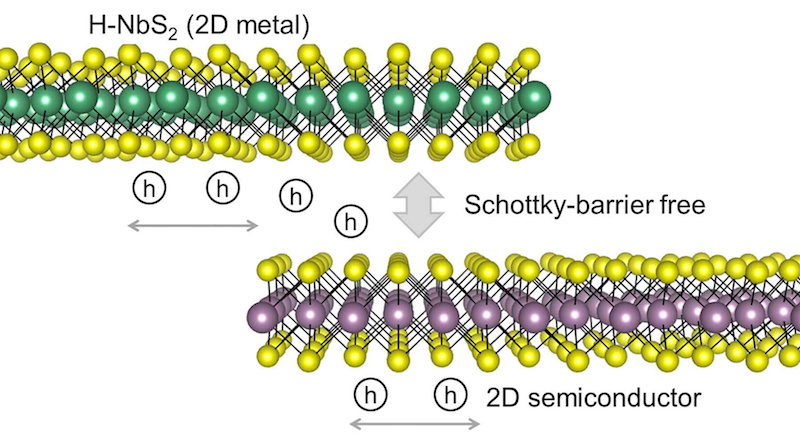 Using 2D metal as contact for 2D semiconductor allows Schottky barrier to be tuned, due to the weak Fermi level pinning at the junction caused by the suppression of metal-induced gap states. Schematic illustrates that 2D H-NbS2 can form a Schottky-barrier-free contact with 2D semiconductor for hole transport

Researchers at the Energy Department's National Renewable Energy Laboratory (NREL) have uncovered a way to overcome a principal obstacle in using two-dimensional (2D) semiconductors in electronic and optoelectronic devices. 2D semiconductors such as molybdenum disulfide are only a few layers thick and are considered promising candidates for next-generation devices.

Scientists first must overcome limitations imposed by a large and tunable Schottky barrier between the semiconductor and a metal contact. The barrier, at the metal/semiconductor junction, creates an obstacle for the flow of electrons or holes through the semiconductor.

The NREL team discovered that the height of the Schottky barrier can be adjusted-or even made to vanish-by using certain 2D metals as electrodes. Such adjustments are not possible with conventional three-dimensional metals because of a strong Fermi level pinning (FLP) effect occurring at the junction of metal and semiconductor, due to electronic states in the semiconductor band gap that are induced by the metal. Increasing the flow of electrons or holes through a semiconductor reduces power losses and improves the device performance.

The NREL theorists considered a family of 2D metals that could bind with the 2D semiconductors through van der Waals interaction. Because this interaction is relatively weak, the metal-induced gap states are suppressed and the FLP effect is negligible. This means that the Schottky barrier becomes highly tunable. By selecting an appropriate 2D metal/2D semiconductor pair, one can reduce the barrier to almost zero (such as H-NbS2/WSe2 for hole conduction).