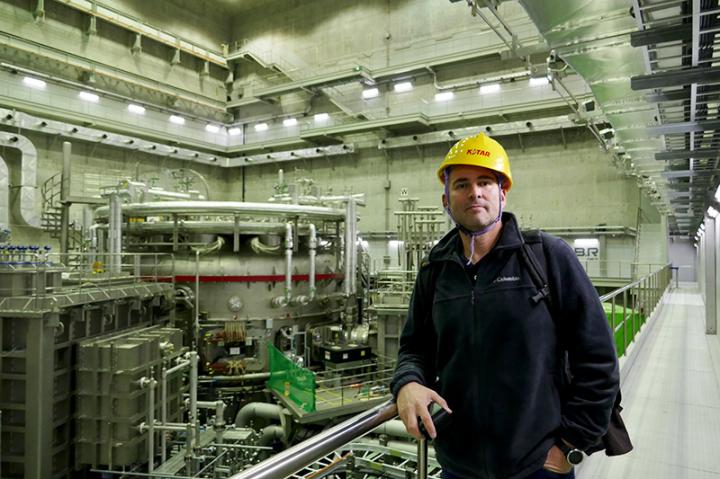 Eugenio Schuster, a professor of mechanical engineering and mechanics at Lehigh University's P.C. Rossin College of Engineering and Applied Science, is an expert in nuclear fusion plasma control. He is pictured at Korea Superconducting Tokamak Advanced Research (KSTAR) in South Korea.

It's hard to believe, but there is actually one initiative that currently unites the world. It's the quest to build a fusion reactor. The European Union, China, South Korea, Japan, India, Russia, and the United States have all committed funding and scientific resources to build ITER (Latin for "The Way"), the largest fusion reactor in history.

"Almost all of us are working toward ITER," says Eugenio Schuster, a professor of mechanical engineering and mechanics at Lehigh University's P.C. Rossin College of Engineering and Applied Science and an expert in nuclear fusion plasma control. "ITER is the mission of the majority of the research groups, universities, and national labs here in the United States, and around the world."

Schuster recently received two grants from the U.S. Department of Energy to help him contribute to that mission. The first supports work he and his team--the Lehigh University Plasma Control Group--will perform on the DIII-D tokamak at the DIII-D National Fusion Facility in San Diego. The second supports experiments they'll do on the EAST tokamak in Hefei, China, and on the KSTAR tokamak in Daejeon, South Korea.

A tokamak is a donut-shaped, magnetic-confinement device designed to produce fusion reactions. The name comes from a Russian acronym meaning "toroidal chamber with magnetic coils."

The promise of nuclear fusion is a big one. It's often referred to as harnessing the power of the sun here on Earth, and if it can be achieved, it could provide a limitless supply of clean, safe, and reliable energy.

Its abundance would stem from its fuel source--water and lithium, both of which are relatively plentiful around the world. Fusion would produce no greenhouse gases, and its waste products would have a relatively short half-life (the period of time in which radioactivity decays to half its original amount). By contrast, fission reactors produce radioactive waste with a half-life stretching thousands of years (or more).

And because fusion requires such precision for it to occur at all, the process would be safer.

"Nuclear power plants based on fission work by permanently containing the fission reaction," says Schuster. "Once the system fails, there is an uncontrolled release of energy. In fusion, we exploit similar physics, but the process is completely different. It's very difficult to have an accident because if anything goes wrong, the condition for fusion just disappears."

Very simply, fusion occurs when two hydrogenic atoms fuse and produce energy. The atoms-- deuterium and tritium--are derived from water and lithium. Since both deuterium and tritium are positively charged and want to repel each other, they must be superheated to upwards of 100 million degrees Fahrenheit. The heat gives the atoms enough kinetic energy to overcome the barrier between them and fuse together. At this point, electrons become too energetic to be confined to the nucleus, and a resulting "sea" of ions and electrons forms a plasma inside the donut-shaped chamber. This plasma has to be confined long enough for fusion to occur.

"The good thing about charged particles like ions and electrons is that they respond to magnetic fields. We're trying to exploit that to create an invisible magnetic bottle to confine the plasma," says Schuster. "Because it's so hot, it can't be in contact with the walls of a potential reactor. So we need to create some kind of cushion between the hot plasma and the inner wall of the reactor. The problem is that the plasma is extremely unstable. And so this is one of the issues related to fusion--how do we stabilize this very hot gas in this magnetic bottle?"

In theory, if the plasma could be stabilized and sustained, the energy produced by fusion would create heat that would be absorbed by the reactor's donut-shaped walls. That heat would create steam that in turn would power generators and turbines and produce electricity.

The instability of the plasma gas is part of the reason the risk of an accident from fusion is so low, says Schuster. If conditions aren't just right, the shape of the plasma will deform and collapse and a fusion reaction just won't happen.

And indeed, an energy generating fusion reaction hasn't happened. Not yet.

"A fusion reaction is very complicated to sustain," says Schuster. "That's why we don't yet have a nuclear reactor based on fusion, and we've been working on this for more than 50 years."

The largest tokamak currently in operation in the United States is the DIII-D tokamak at the National Fusion Facility in San Diego. Schuster's first DOE grant of $745,000 will support the work he does there with his team.

"This is one of my strongest and longest collaborations," says Schuster. "I always try to have part of my group there because that's what we do here at the Lehigh University Plasma Control Group. We look at plasmas in magnetic-confinement fusion devices like the DIII-D tokamak and try to understand the dynamics of the plasma, and how to stabilize it."

Schuster's team tries to model the response of plasma to actuators like radio frequency waves to better predict the behavior of that response, and to design control solutions to keep the plasma stable.

The challenge with working on DIII-D, however, is that it lacks the superconducting coils of newer machines, which limits how long the machine can run.

"So far, tokamaks cannot operate continuously over time," he says. "They work on pulses. They start, run a bit, then you have to turn them down. With DIII-D, the typical length of time we have to do our experiments is six, seven seconds. We wait 10 minutes, then we run the machine for another six seconds."

Newer tokamaks--like the Experimental Advanced Superconducting Tokamak (EAST) in China and Korea Superconducting Tokamak Advanced Research (KSTAR) in South Korea--are referred to as "long pulse" as they produce pulses two orders of magnitude longer (up to 500 seconds at a time). Schuster's second DOE grant will enable him to conduct longer experiments on both EAST and KSTAR. The grant was the result of a proposal he submitted in collaboration with six other leading American nuclear-fusion research institutions, the total of which was nearly $8 million, with Lehigh receiving more than $760,000 (in addition to a previous supplement of $230,000).

"We're trying to extrapolate the solutions we get from short-pulse machines in the United States to these long-pulse machines," says Schuster. "In the end, everything we do and learn at DIII-D, at EAST, at KSTAR, is so we can extrapolate it and do it on ITER."

The promise of ITER

Construction on the ITER tokamak began in 2007, in Saint Paul-lez-Durance in southern France. It's expected to be operational by 2025, and it will be massive. According to the ITER website, the reactor will weigh 23,000 tons (for reference, the Statue of Liberty weighs 225 tons), have a total height of 239 feet (about as tall as a Giant Sequoia), and contain enough superconducting strands to wrap around the equator twice.

The primary difference between ITER and all other tokamaks--other than its size--is that it will be the first nuclear reactor based on fusion.

"All tokamaks today are experimental devices," says Schuster. "They are not generating power. They are designed to help us study the physics of the plasma, how to stabilize it, confine it, and keep it safe. We try to create conditions where we have the plasma, but not much fusion, because if there's fusion, there will be radioactivity, and we don't want that in an experimental device. We can't avoid generating some radioactivity, but it's very low."

ITER's mission is different, he says. The goal is to produce power from fusion, specifically, to produce output at 10 times the input. So if it takes 50 megawatts to heat the plasma, for example, ITER will produce 500 megawatts.

It won't, however, be capable of that immediately. Even after it's operational, it will take ITER 10 to 15 years to get to that gain of 10, says Schuster.

"ITER is a research experiment, but it's a nuclear one," he says. "The plasma will be different. It will be what we call a burning plasma, a plasma that really sustains nuclear fusion."

In 2018, the ITER Scientist Fellows Network, an influential and prestigious group of scientists and physicists working on simulation and theory, named Schuster as one of its Fellows.

"Our team here at Lehigh works on problems with the ITER group directly," says Schuster. "We don't do experiments of course, but we simulate how the plasma will evolve. I'll be traveling to ITER again this winter with one of my students, and with my postdoc who is currently working on DIII-D in San Diego."

It's been more than 50 years since researchers first began exploring the possibilities of fusion. And while much progress has been made, and much promise lies ahead, such incremental progress could be discouraging for some. But not for Schuster. There's just too much potential, he says.

"I might be retired before we have a nuclear power plant based on fusion, but I hope my students, and their students, will see it," he says. "Nuclear fusion is such a challenging problem, but it has the potential to make a huge impact on humanity. It could solve problems around energy generation, pollution, climate change. And there is a whole generation of Lehigh students focused on plasma control who have been contributing not only to our domestic program, but to the international program focused on ITER. It makes me very proud and excited, and it's impossible to not want to keep moving forward."