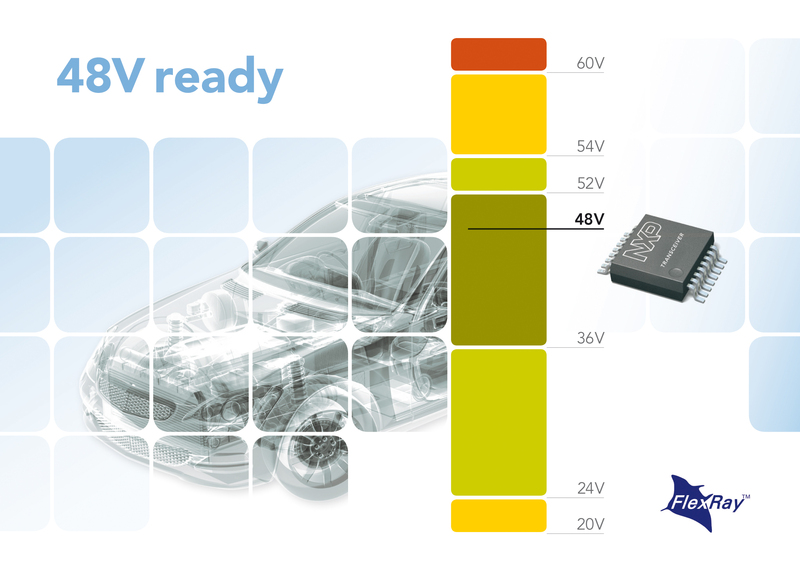 NXP Semiconductors, the world's largest supplier of in-vehicle networking semiconductors - today announced the availability of a new family of FlexRay transceivers that supports the automotive industry move towards a 48V board net in future vehicles. The new 48V FlexRay products complement the existing portfolio of 48V CAN transceivers. Last year, at an international automotive electronics congress in Ludwigsburg, Germany, the top five German carmakers BMW, Audi, Daimler, Porsche, and Volkswagen had jointly announced their agreement to take this step. NXP's transceivers are the industry's first that are capable of supporting the new board net by offering up to +/-60V robustness. As the electrification of previously mechanical functions within vehicles continues, from power steering to the power train and vehicle dynamic systems, the standard 12V board net has reached its limits. Rather than increasing the cable diameters in 12V systems, automotive manufacturers are now determined to standardize on 48V instead. This step will ensure efficient power supply to all high-current devices. OEMs also expect that 48V systems would reduce CO2 emissions based on optimized recuperation, replacement of hydraulics in power steering, and improved air conditioning. At the same time the 48V board net would reduce the weight and footprint of high-power actuators. NXP is once again demonstrating leadership in in-vehicle networking by being the first company to deliver robust FlexRay transceivers capable of supporting the upcoming 48V standard without the need for expensive external decoupling devices. Offering reduced CO2 emissions due to very low current consumption in standby and sleep mode plus high immunity to ESD, the new transceivers highlight NXP's high performance mixed signal strategy. While other companies continue to design using lower voltage CMOS processes, NXP's ABCD3/9 technology offers high voltage features far beyond 60V at a high density of digital logic. At the 15th Automobil-Elektronik Congress in Germany in 2011, BMW, Audi, Daimler, Porsche, and Volkswagen had jointly announced their decision to push for a rapid implementation of 48V systems in the short or medium term. At the same time they appealed to semiconductors companies to actively support their move. Giuseppe Mascolino, BMW, head of E/E architecture, system functions, software development, and e-mobility, explains: "As more high-power devices are being added to vehicles it becomes increasingly difficult to drive these functions out of a 12V supply, both from a technical and economic point of view. This is why BMW and other major car manufacturers decided to add a second system of 48 Volts into future car models to supplement the existing 12V board net. This will facilitate easy and cost-efficient integration of high-power components in the future and will enable new innovative functions." Kurt Sievers, Executive Vice President and General Manager of NXP's automotive business says: "As the leading global supplier of semiconductors for in-vehicle networking, we are constantly looking for ways to drive innovation within the automotive industry. Our existing in-vehicle networking portfolio and our new family of 60V FlexRay transceivers clearly prove this, as they enable the advancement of a whole new power domain within in-vehicle networking. With CAN and FlexRay transceivers now available from NXP to support 48V systems, car manufacturers can start designing applications for the cars of the future today." NXP is the global number one supplier of CAN and FlexRay products and has pioneered the FlexRay market for over 10 years. www.nxp.com/products/interface_and_connectivity/transceivers/flexray_transceivers/