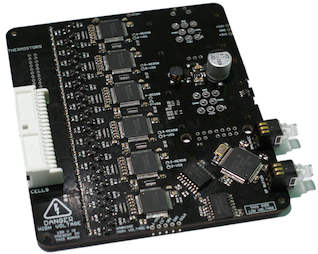 The winning design featured seven TI components in its construction including: a battery pack protector, a performance microcontroller, a controller area network transceiver, a step-down voltage regulator, a digital isolator and two logic gates. The design, a 36-cell-capable lithium-ion battery monitoring circuit, was designed to be installed on the RW-2x, the second electric road racing motorcycle designed by a team called Buckeye Current. Bonnell-Kangas used TI parts to improve the power efficiency and battery management capabilities from the previous battery management module.

During the 2013-14 school year, 120 accredited engineering colleges and universities from the U.S., Canada and Mexico participated in the TI Innovation Challenge, which attracted 810 participants. This year, the top three finalist teams presented their projects to Rich Templeton, chairman, president and chief executive officer of Texas Instruments, during the two-day contest finals in Dallas.

“Texas Instruments’ Innovation Challenge brings together hundreds of bright minds and puts their skills to the test to tackle a real-world problem,” said Steve Lyle, director, engineering workforce development and university marketing for Texas Instruments. “Aaron’s project showed determination and creativity to improve upon an already impressive design. I’m thrilled to see that these young engineers aren’t afraid of design challenges and I wish them well in their future endeavors.”

The 2015 TI Innovation Challenge will open on Monday, August 25 to eligible contestants in the U.S., Canada and Mexico.