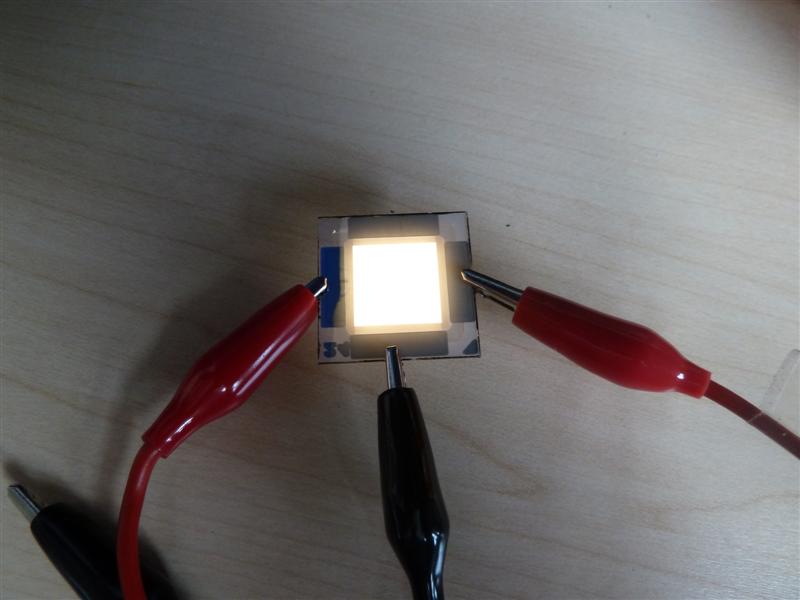 Technological breakthrough at OSRAM: researchers and developers have achieved a new efficiency record in the laboratory for OLED. The laboratory sample achieves 87 lm/W, significantly exceeding the current peak value. And the most important thing: the laboratory sample is highly proximate to the product, thus paving the way for highly energy-efficient OLED products with considerably higher brightness. In its research process OSRAM has taken a major step closer to its goal of developing mass-market OLEDs. The current laboratory sample achieves 87 lm/W - exceeding the previously-achieved peak value by 40 percent. This means that OLEDs are almost achieving the efficiency of fluorescent lamps in the laboratory. Important: measurement is performed under application-oriented conditions in an integrating sphere - that is, without macro extractors, i.e. lenses to optimise the measurement results. Measurements were taken at a brightness of 1,000 cd/m2 and a colour temperature of approximately 4,000 K. A further success for the OSRAM research team: the laboratory sample also achieved almost 75 Im/W at a brightness of 5,000 cd/m2. The organic functional material employed was already tested in pilot manufacturing and enables product-relevant lifetimes. The OLED laboratory sample was prepared using a pure thin-film approach. The current was distributed evenly over the active surface using a special injection electrode on the light-generating surface and offers homogenous light density from every angle. The aesthetic impression is not disrupted by visible electrode structures. The manufacture of the sample is highly product-proximate - plans for industrialisation are already being evaluated. "We have made a key breakthrough with the laboratory sample. For the first time we have managed to obtain such high efficiency whilst retaining both aesthetic and technological characteristics such as lifetime, robustness and extreme flatness in a thin-film approach - in other words, we have given the panel the characteristics that are also central for future series production," says Thomas Dobbertin, head of OLED technology at OSRAM. OLED research at OSRAM is funded via the TOPAS 2012 project of the German Federal Ministry of Education and Research (reference no. 13N10474). The focus of the research work of TOPAS 2012 is upon the development of OLED as the lighting of the future. "With our new peak value we have taken a major step towards our goal of achieving 100 lm/W," says Thomas Dobbertin. ABOUT OSRAM OSRAM (Munich) belongs to the Industry Sector of Siemens and is one of the two leading light manufacturers in the world. In the 2010 financial year, it achieved a turnover of €4.7 billion. OSRAM is a high-tech company in the lighting sector and 70 percent of sales come from energy-efficient products. The company, which is very much internationally oriented, has more than 40,000 employees worldwide, supplying customers in around 150 countries worldwide (30 September). www.osram.com