Phinergy and Alcoa demonstrate an electric car with massive range 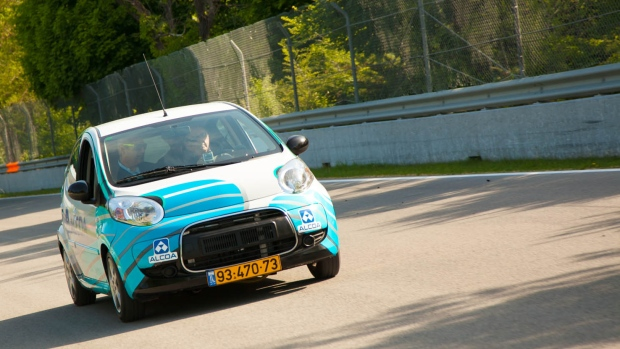 Imagine making the 19-hour, 1,800-kilometre drive from Toronto to Halifax in an electric car without having to stop for a recharge. That's theoretically possible with a special kind of battery being demonstrated this week in Montreal by Israel-based Phinergy and Alcoa Canada.The partners have refurbished an "ordinary car" to use a special "aluminum-air" battery. The battery can extend the range of an electric car by 1,600 kilometres when used in conjunction with the vehicle's regular lithium-ion battery.

"We hope that this will increase the penetration of electric cars with zero emissions," said Aviv Tzidon, CEO of Phinergy, in an interview with CBC Montreal's Homerun earlier this week, adding that it should put an end to "range anxiety." That kind of anxiety about how far an electric car can go before needing a recharge has often been cited as a reason the market for electric cars is still relatively small.

The regular battery range of electric cars now on the market is a few hundred kilometres at most — 135 kilometres for the Nissan Leaf and 480 kilometres for the more expensive version of the Tesla Model S. That makes those cars unsuitable for extended road trips, unless high-voltage fast-charging stations, which are still relatively uncommon, are available along the way.

"When you're buying a car, you want to buy freedom," Tzidon said. "When you have a car which is limited in range, and you need to have infrastructure to [fast-charge it], you are losing this freedom."

Electric car drivers hope more charging stations will reduce 'range anxiety'
According to Tzidon, the new battery technology can store enough energy to take a car 3,000 kilometres with 100 kilograms of aluminum-air batteries. For comparison, the Tesla Model S battery is estimated to be more than 500 kilograms.

The batteries are "charged" not from the electrical grid, but from hydroelectric power generated at Alcoa's smelter in Baie-Comeau, Que., Tzidon said. When they are full-charged, they are thick, heavy panels made mostly of aluminum.

The energy is released via a chemical reaction that draws oxygen from the air and uses water fed into the car by the user to turn the aluminum into alumina (similar to the reaction that turns iron into rust). This reaction happens naturally when aluminum is exposed to air, but then, the alumina layer on the surface stops the reaction from penetrating deeper. Phinergy's technology includes an electrolyte that dissolves the surface layer, allowing the reaction to continue.

Read the rest of the article at CBC News