Photovoltaic demand in the Asia Pacific region to reach 13.5 GW in 2013

Photovoltaic demand in the Asia Pacific region to reach 13.5 GW in 2013 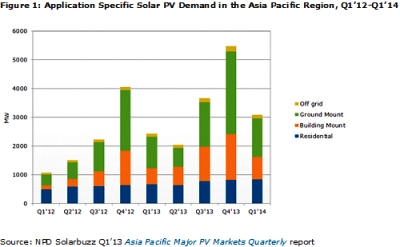 Solar photovoltaic (PV) demand from the Asia Pacific (APAC) region is forecast to grow to 13.5 GW in 2013, growing 50% Y/Y, according to the NPD Solarbuzz Q1'13 Asia Pacific Major PV Markets Quarterly report. China, Japan, India, and Australia remain dominant for PV demand in the APAC region, and they will account for 90% of APAC demand in 2013. However, discrete end-market demand environments are now evolving in each of these countries. As a result, PV suppliers and technologies are being selected in each territory based upon factors such as domestic manufacturing, policies, import duties, and customer preferences. "Having a single go-to-market strategy to meet growing PV demand across the entire APAC region is no longer viable," stated Chris Sunsong, analyst at NPD Solarbuzz. "Leading APAC countries are now evolving into micro-climates that create customized supply channels. Suppliers are being forced to pick and choose the countries and application segments that overlap with their product portfolios and corporate strategies. Quarterly cycles also continue to define PV demand, reflecting the effects of policy deadlines and weather-related seasonality." In Australia, the elimination of the Solar Credit Multiplier, along with incentive reductions in Victoria and Queensland, will slow PV growth during 2013. In Japan, demand will peak during Q1'13, ahead of scheduled tariff reductions in April. The Chinese government will likely re-adjust the goals of its 12th Five-Year Solar Development Plan, and the country will see over 75% of its 7 GW demand in 2013 occur in 2H'13. However, it is crucial that any changes to the feed-in-tariff rates drive PV developers to complete their projects earlier in the year, thus avoiding the dramatic year-end demand swings experienced in the past. In India, the final version of Phase II of the National Solar Mission program is still pending. The country could see a capacity increase from 3.7 to 9 GW, with an increased focus on the off-grid and rooftop sectors. The threat of further trade wars involving APAC countries, along with other import restrictions, is segmenting the APAC region into country and application-specific markets. Domestic content restrictions on imported modules into India may strongly affect c-Si supply from China or any thin-film imports to India. The APAC region is becoming more selective about technologies. In Japan, high-efficiency modules have become the preferred technology for locations with constrained space. In China, domestically manufactured multi c-Si modules are satisfying ground-mounted requirements. And in India, 1 GW of new demand will come from rooftop projects under Phase II of the National Solar Mission, which could further shrink this key market for thin-film suppliers. "There are various factors driving overall PV demand across the APAC region, but each country is still subject to a number of risk factors," added Sunsong. "For example, the Chinese and Indian markets are constrained by bank financing and grid accessibility, and Australia remains vulnerable to future policy shocks." NPD Solarbuzz