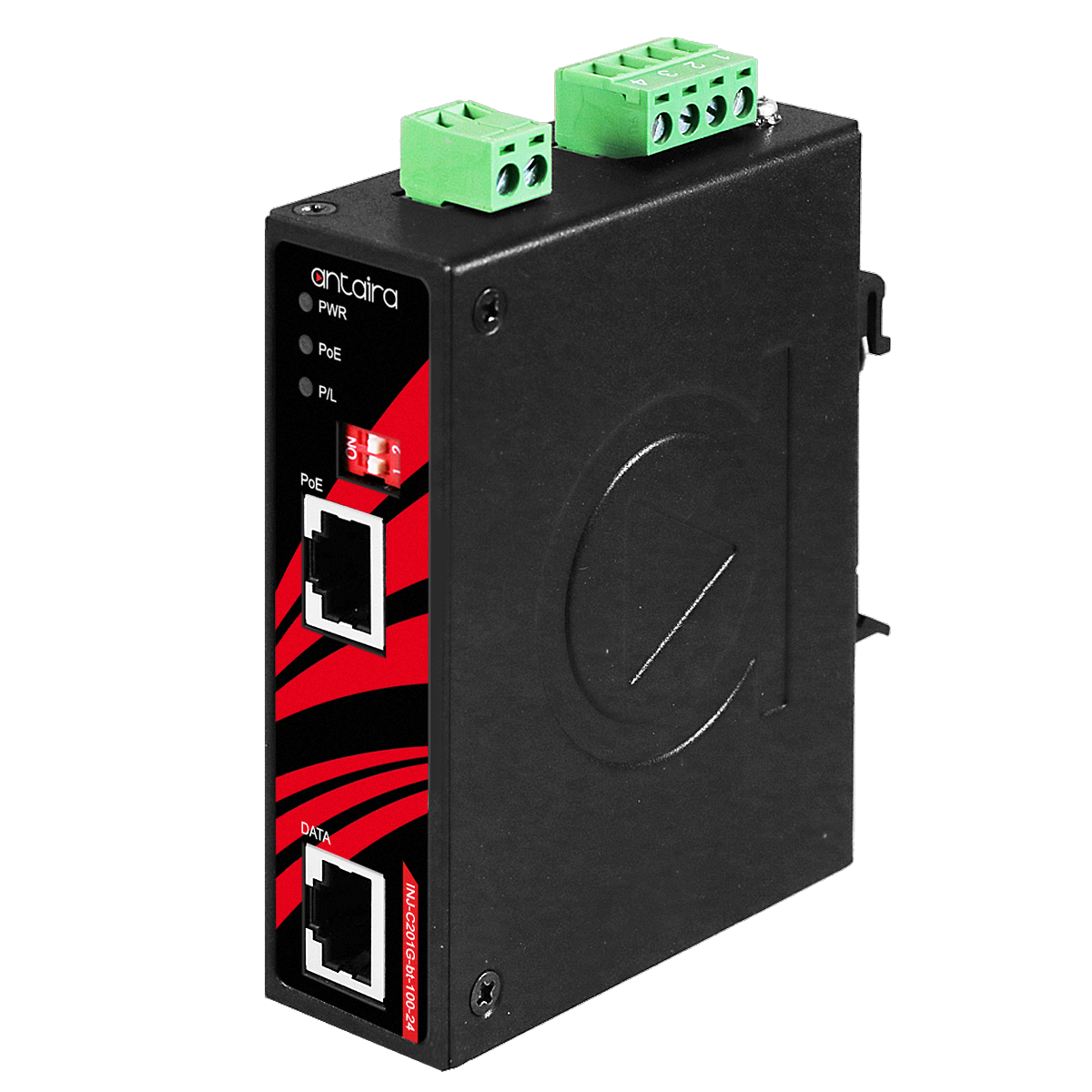 ­Power over Ethernet (PoE) LAN Switches are essential components of modern industrial networks, supplying DC power to an assortment of PoE Powered Devices (PDs) over long distances, while transmitting data over the same CAT5 or higher cable. Managed or unmanaged, PoE LAN switches provide a number of important advantages to network administrators. For example, without being tethered to electrical outlets, connected PDs can be positioned in optimal locations during network expansions and be easily repositioned when needed, enhancing flexibility and network scalability while saving on the expense of installing power outlets. The latest version of the IEEE PoE standard, known as 802.3bt, increases maximum power to 90W per switch port, opening the door to powering PDs as diverse as LED lighting, sensors, WAP, alarm systems, IP PTZ cameras and monitors, and even air conditioners.

Since their introduction in the early 2000s, PoE LAN Switches have heralded major changes for industrial applications, and have accelerated the already rapid transition to Ethernet-based industrial control systems. However, there are millions of non-PoE LAN switches in use today without this capability. So, what does a network administrator do when an existing Ethernet switch is not PoE-enabled yet the PD they are adding to the network is? In this brief article, we’ll tell you how to overcome this shortcoming with a simple device: the PoE Injector.
WHAT IS A PoE INJECTOR?
Essentially, a PoE injector functions as an intermediary to connect a non-PoE switch to PoE compliant devices. It does this by adding power to an Ethernet cable so that any IEEE 802.3af, IEEE 802.3at, and IEEE 802.3bt PD connected can be powered. Also known as midspans or PoE Adapters, PoE injectors are typically used with low-power devices (30W) installed in hard-to-reach places where no power outlets are available, although newer industrial injectors can deliver much higher wattages up to 95W through multiple ports. Since many injectors must be installed outdoors or in factories, environmentally hardened features — such as IP30 housings, wide temperature ranges, resistance to shock, EMC and vibrations, lightning protection, overload protection, and redundant power inputs —are often added to support zero downtime applications.
PoE injectors integrate easily with existing network switches. Mounted on a wall or DIN-rail, the injector sits between the non-PoE LAN switch and the PoE complaint PD. The injector is networked to both the switch and the PD via Ethernet cables, and is powered separately by a local AC outlet that it automatically converts to DC. Injectors usually are configured with two unmanaged RJ45 ports: data-in and data+power out. The data-in port connects to the non-PoE LAN switch while the data+power out port connects to a PD that can be positioned up to 100 meters (328 feet) away. AIf there is only one PD to power, a single-port PoE injector is enough. For multiple PDs, the number of PoE injector port count must match with the injector. Also, a Gigabit non-PoE switch will require a Gigabit injector to maintain network speeds.
CABLES
It is important to know the type of cabling to be used while connecting the PoE devices with the PoE injectors and the switch. According to IEEE PoE standards, the cabling requirements for the PoE injectors vary with each standard, for example, the IEEE 802.3af standard allows a maximum of 15.4 Watts of power to be delivered, corresponding to Cat 3, Cat 5, or higher cables. Similarly, the IEEE standards of 802.3at use Cat 5 cable, while 802.3bt Type 3 and 802.3bt Type 4 use Cat 6 or higher cables due to increased heat and power transmissions.
SAFETY
All IEEE 802.3af/at/bt compliant PoE injectors are engineered to prevent damage to a device even if that device is not designed for PoE. Once plugged in, a handshake procedure will be initiated by the injector before it sends power to the connected PD. That procedure utilizes low voltage and is harmless to any connected device, PoE or non-PoE. Once the handshake is completed successfully, the PoE injector begins sending power and triggers the connected device to start up. If the handshake is not completed for any reason, the injector will not send power, therefore preventing damage.
VOLTAGE
To avoid overloads or operating issues, the PoE-enabled PD needs to be compliant with the voltage supplied by the PoE injector. As mentioned earlier, there are three PoE standards—802.3af (PoE), 802.3at (PoE+), 802.3bt (PoE++) — supporting a power supply of up to 15.4 W, up to 30 W, and up to 60 W /100 W respectively. As an example, most PoE IP cameras use 12 or 24 volts so check the specifications of the PoE injector to make sure they match those of the camera, that is, either PoE or PoE+.
ACTIVE vs PASSIVE INJECTORS
There are critical differences between an active PoE injector and a passive PoE injector. An active PoE injector, once connected, establishes the “handshake” with the PoE device mentioned earlier, and upon success, it powers up the device. An active PoE injector will first determine the characteristics of the incoming current flow. After that, it matches the flow with the requirements of the device itself. If it senses any discrepancy in current flow, it simply won't flow the current to the device. This eliminates the risk of burning out the device.
Active PoE injectors follow IEEE 802.3af, IEEE 802.3at, and IEEE 802.3bt standards, whereas passive PoE injectors do not. A passive injector does not perform a handshake function. It will send raw unnegotiated energy down ethernet cables to connected devices, whether they are able to handle it or not. This is why Passive PoE is dubbed as “Always ON.” To mitigate the risk of Passive PoEs, always make sure you are connecting the device to the exact voltage the device requires.
When using a PoE injector to power devices, Antaira strongly recommends you use an Active PoE injector to deliver power.
ADVANTAGES OF USING PoE INJECTORS
Due to their ease of integration and PoE functionalities, Industrial PoE Injectors have several advantages including:
ANTAIRA’S ANSWER
Antaira Technologies solves the non-PoE switch problem with its INJ-C201G-bt-100-24-T, an industrial Gigabit enhanced PoE++ injector. It ensures full 90W PoE output for better usage in factory automation. It also supports Enhanced PoE mode to supply up to 100W to the powered device, as well as a Power Booster for low voltage power inputs. Purpose engineered for industrial sites, the INJ-C201G-bt-100-24-T features a reliable fan-less design, a temperature range of -40°C to 75°C, redundant 9 to 55VDC power inputs, and an IP30 rating, all backed by a five-year warranty.
To learn more, go here.