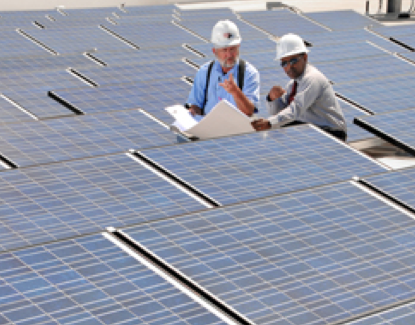 Powered by a rapidly-growing residential market, Louisiana became a Top 20 solar state for the first time last year, according to the recently-released U.S. Solar Market Insight 2014 Year in Review. It was the fifth straight year that Louisiana showed strong growth in solar installations.

In 2014, Louisiana added 31 megawatts (MW) of solar electric capacity, bringing its total to 65 MW. That’s enough clean, affordable energy to power more than 6,000 homes. The report went on to point out that Louisiana’s biggest solar gains came in residential installations, but commercial installations increased, too. Of the new capacity added, 30 MW were residential, while the nascent commercial sector added 1 MW, with leading companies like Walgreens and Whole Foods going solar. Together, these installations represented a $111 million investment across Louisiana.

“As a percentage of total solar installations last year, Louisiana’s residential market did better than any other state in the nation. That’s pretty impressive,” said Rhone Resch, president and CEO of the Solar Energy Industries Association (SEIA). “Looking forward, we expect 2015 to be another great year in Louisiana, with new PV installations across the state increasing by more than 30 percent. But this growth could be jeopardized if proposed changes to the state’s popular solar tax credit are enacted.”

Today, there are 57 solar companies at work throughout the value chain in Louisiana, employing more than 1,200 people. Resch predicted that hundreds of new solar jobs could be created in the future, if stable solar policies continue. As the result of an earlier compromise between legislative leaders and solar advocates, Louisiana’s successful solar tax credit was supposed to remain in place through the end of 2017. “Simply put, the solar tax credit has helped to spur a growing solar market in Louisiana. Today, our industry is following a similar development curve as oil and gas, and we encourage Gov. Jindal to keep current incentives in place, giving solar a fighting chance to compete with entrenched energy sources in the future.”

Last year, Louisiana’s residential market began to firmly take root, with installed system prices dropping by 8 percent – and down a total of 49 percent since 2010. Nationwide, the U.S. residential market added 1.2 GW of installed capacity in 2014, marking the first time that this growing sector surpassed 1 GW of clean, affordable solar. Residential also continues to be the fastest-growing market segment in the U.S., with 2014 marking three consecutive years of greater than 50 percent annual growth.

“Today, the U.S. solar industry employs 174,000 Americans nationwide – more than tech giants Apple, Google, Facebook and Twitter combined – and pumps nearly $18 billion a year into our economy,” Resch added. “This remarkable growth is due, in large part, to smart and effective public policies, such as the solar Investment Tax Credit (ITC), Net Energy Metering (NEM) and, in Louisiana's case, the state's popular solar tax credit. By any measurement, these policies are paying big dividends for both the U.S. and Louisiana economies, as well as for our environment.”