Higher thermal performance can be achieved by ribbon bonds attached to the back side of the power module, even with all other components left untouched 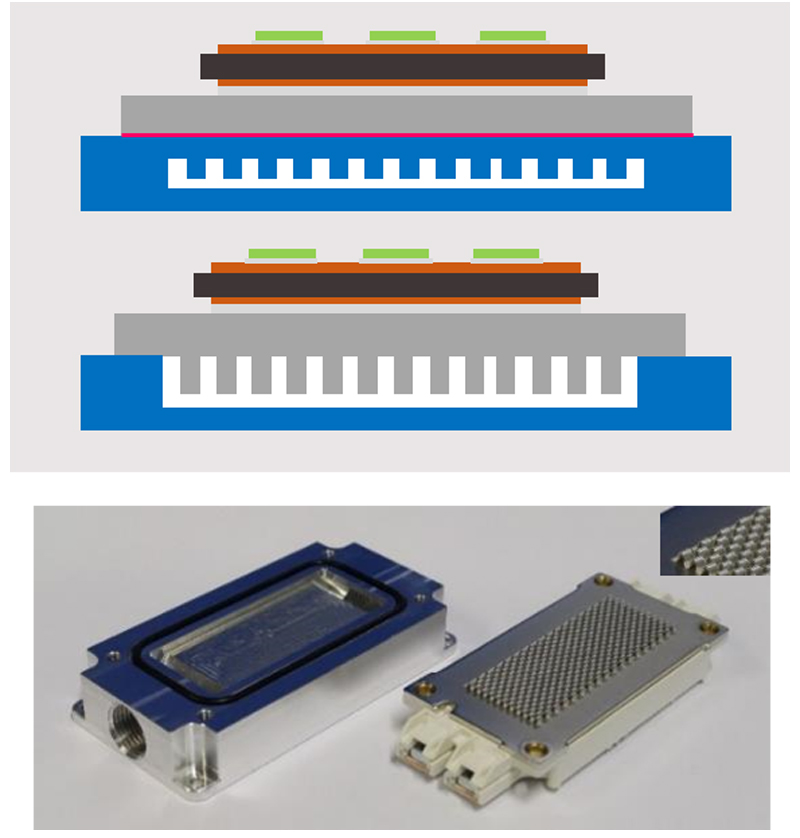 Figure 1: The upper part shows a schematic of power modules on closed (top) and open (bottom) liquid heat-sink solutions. The lower part is a picture of the wave technology on the power module baseplate together with the open heat sink

Electrified drive trains in heavy-duty vehicles pose a challenge for semiconductors in a multitude of ways. One key element includes the highly repetitive load cycles that define demanding lifetime requirements for power modules. The wave baseplate is an upgrade of the well-established EconoDUAL3 package: a ribbon-bond structure on the back side of the power module that significantly improves the thermal performance on an open, liquid-cooled heat sink, without altering the other parts of the power module. Depending on the heat sink, this approach enables an increase in output current by more than 20 percent, or correspondingly, a significant increase in lifetime for a given load profile.

Liquid-cooled heat sinks are already a standard solution in both passenger e-cars and e-buses, with two different concepts, as depicted in figure 1. Cold-plate solutions provide a closed liquid system, where the power module is mounted on top with thermal grease between the module and the heat sink. The well-defined interface between power module and heat sink allows for easy thermal optimization of both parts individually, and standardized heat sink components may be used. On the other hand, a better overall performance can be reached with a different concept: An open heat sink system, where the back side of the power module is in direct contact with the liquid. In the latter case, the thermal performance is only defined as a combined parameter of heat sink and power module, since it depends on the interplay between power module back side and heat sink geometry.

The bottom part of figure 1 shows a picture of the wave baseplate, where ribbon bonds are attached on the back side of the module, together with the open heat sink. The wave concept enlarges the surface area, and at the same time, the structure allows for enhanced turbulence in the liquid. Both effects support better thermal resistance and thus reduced temperatures at the semiconductor in comparison to a standard module with flat baseplate [1]. In contrast, the standard power module is mounted on top of a closed heat sink with a layer of thermal grease at the interface between back side and heat sink, and the surface area to the liquid and the turbulence are defined by the closed heat sink alone.

A performance comparison is done based on the EconoDUAL3 package, with a half-bridge configuration and a nominal current of 900 A. Details of the package, in combination with the latest IGBT7 chip technology, have been described [2]. To enable a fair comparison, both types are operated in an application test at variable Irms and a switching frequency of 4 kHz [3]. The chip temperatures are accessed using open black-painted modules and a thermal camera. Figure 2 shows thermal scans of the open power module for the two different cooling concepts at the same operating conditions. A standard power module with flat baseplate is operated on a closed heat sink, and the same product with wave baseplate is operated on an open heat sink. The advantage of the ribbon-bond solution with clearly lower temperatures is immediately visible.

The average temperature across the chips is taken from these images and used for further analysis. Figure 3 shows the chip temperature for different output current Irms. The water inlet temperature of 50°C is shown as a horizontal line to indicate the maximum temperature ripple for each operating condition. Again, solutions with open heat sink and ribbon bonds operate at a much lower temperature, and a higher volume flow further reduces temperatures. At a volume flow of 15 l/min and Irms = 500 A, a temperature decrease of 25 K is reached. In turn, also the temperature ripples during a mission profile will be lower. This is highly attractive for heavy-duty vehicles, where the maximum temperature during operation is often limited in order to avoid large temperature swings and the related lifetime consumption. Alternatively, the ribbon-bond solution allows for an increase in output current of up to 30 percent, which in addition offers an increase in power density as well. 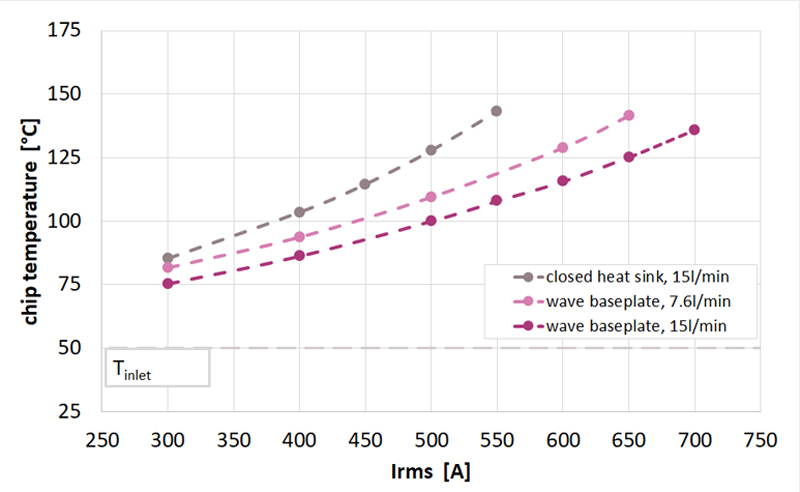 Figure 3: Temperature as measured with the thermal camera, for closed heat sink with 15 l/min and for open heat sink with ribbon bonds at two different flow rates

From the graph, a higher volume flow may seem desirable, but this comes at the cost of higher pressure drop across the heat sink. Considerations that are more detailed can be found in [3], but ultimately a thorough analysis of the individual coolant system is highly recommended in order to find a good balance between volume flow, pressure drop, and thermal performance of the system.

Improvement of Lifetime in the Application

Another very crucial parameter in bus applications is the lifetime of the power module. Especially inner-city transport deals with a large number of starts and stops that prove to be very demanding in terms of power cycling (PC). The PC capability of a power module is provided by the manufacturer, where the applied test method should be checked, as this may have a significant impact on the test result [4]. Since the ribbon-bond concept is an add-on to the bottom side of the module only, the general PC capability is the same as for standard modules. Taking this as a given, the improved thermal performance as described above leads to reduced temperature ripple and thus improved lifetime for a given mission profile and target lifetime [5].

To gain a first insight into the advantages of the new concept, a simple comparison can be made: the maximum temperature swing is between the inlet temperature and chip temperature at a given Irms. Assuming that this is the only temperature ripple present in a single load cycle, the number of possible cycles is directly determined by the PC curve. Figure 4 shows the resulting relative lifetime for the different scenarios. Based on the simple picture, an increase in lifetime by a factor of two to five is recognized at an output current of 500 A. In the other view, the output current may be increased by 20 percent to more than 30 percent, depending on the volume flow, for the same package, without sacrificing lifetime. These are very promising estimates, especially keeping in mind that the power module itself, with electrical configuration and gate driver board, is not altered at all. The only difference is a change from a cold-plate to an open heat-sink solution. 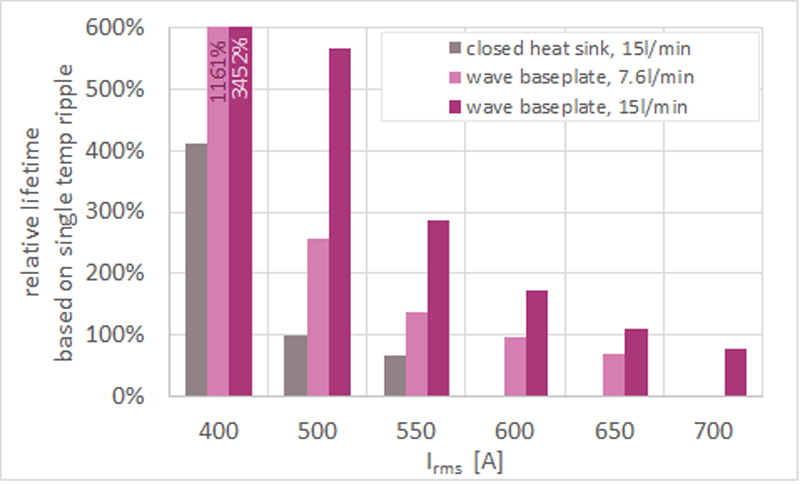 Figure 4: Relative lifetime, assuming only a single temperature ripple at the given Irms

To summarize, the wave technology is proven to provide a clear benefit in the application. With ribbon bonds attached to the back side of the power module, and all other components left untouched, a much better thermal performance is achieved. This can be used to easily increase the output current by more than 20 percent, or to significantly improve the lifetime capability of the power module at given operating conditions. The latter is especially attractive in heaty-duty applications like e-busses or delivery vehicles, where start-stop operation defines high lifetime requirements for the power module.