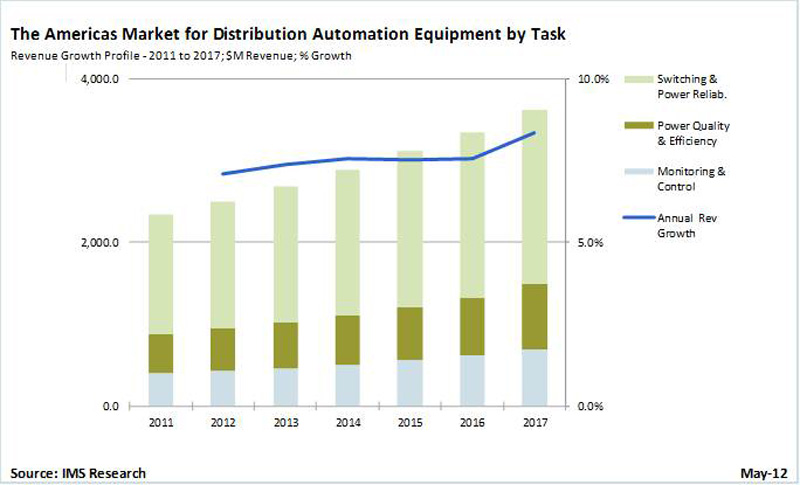 IMS Research estimates the global market for distribution automation equipment generated more than $11 billion in revenue during 2011, with forecast growth to more than $18 billion annually by 2017. Equipment related to power quality is anticipated to be one of the fastest growing segments of the distribution automation market, particularly in North America, where revenues are expected to grow from more than $400 million in 2011 to a projected $700 million in 2017. Capacitor banks and voltage regulators are increasingly being automated, allowing these devices to be remotely controlled and work in direct coordination with one another in Volt/VAR optimization and conservation voltage reduction (CVR) schemes. Volt/VAR optimization maximizes the efficient use of power throughout the distribution network, while ensuring the correct (and safe) power reaches the end user, while CVR attempts to deliver the minimum voltage required by devices at the end consumer. Both applications require investment in not only the heavy metal, but increasingly there are more sales of switches and control modules to help automate schemes. Comments analyst Nicole Juarez: "Adding electronics and controls allows equipment to act independently and/or be programmed in a system-wide scheme, allowing smart grid functionality to be accomplished. The surge in the power quality segment of the distribution automation market is coming from additional revenues being realized from retrofit sales. This is most pronounced in North America, where new construction has slowed and aging infrastructure makes the addition of controls onto existing heavy metal equipment in the field an easily justifiable investment for utility companies. In these regions, capacitor controls and voltage regulator controls are expected to grow faster than their heavy metal counterparts." Continued regulatory change is expected in North America, where some state's PUCs are enforcing decoupling schemes, whereby removing the utility companies' revenue earnings from a direct correlation to the amount of electricity sold. As this continues, more utility companies here will see a strong ROI on investing in not only power quality equipment on the grid, but also additional equipment such as sensors and other monitoring devices. Adds Juarez: "In the short term, the appeal of Volt/VAR optimization schemes and the strong opportunity for retrofit opportunities for capacitor controls and voltage regulator controls will result in strong growth for power quality equipment. In the long term, the increased use of renewable generation and electric-vehicle charging will cause new challenges for the grid that will make the case for this group of devices even stronger, along with promoting the emerging market for energy storage on the grid." www.imsresearch.com www.ihs.com