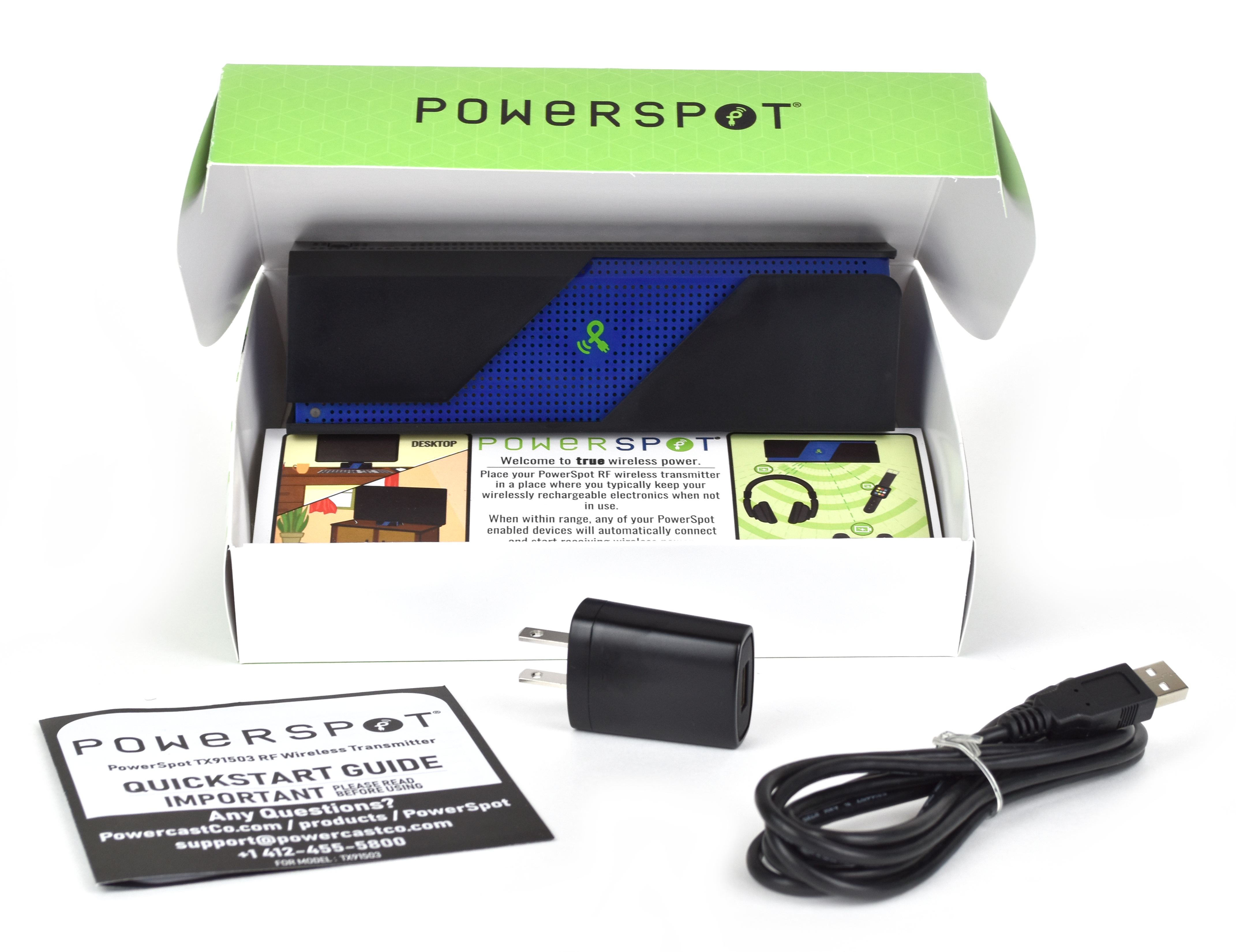 PITTSBURGH, Pa. -- Powercast Corporation announced that it has begun shipping its three-watt, Bluetooth-approved PowerSpot transmitter which is the industry’s first that works in the far field (up to 80 feet) to charge multiple consumer devices over the air - no charging mats needed. Powercast began production of its PowerSpot transmitter after receiving FCC (ID: YESTX91503) and ISED (Canada IC: 8985A-TX91503) approval late December 2017, promising delivery in Q3 2018. The company is also launching a development kit to help manufacturers easily design PowerSpot-based wireless charging ecosystems.

How Powercast’s patented remote wireless charging technology works:
Creating a coverage area similar to Wi-Fi, the PowerSpot transmitter automatically powers or charges PowerSpot-enabled devices when they come within range. The transmitter uses the 915-MHz ISM band to send RF energy over the air to Powercast’s tiny Powerharvester receiver chip embedded in a device, which converts it to direct current (DC) to either directly power or recharge that device’s batteries. The Bluetooth-approved transmitter detects devices within range and automatically begins delivering power.

The company’s vision is to enable long-range, true wireless charging where consumers simply place all their PowerSpot-enabled devices within range of a PowerSpot transmitter in their home or a public place.

The PowerSpot creates an overnight charging zone of up to 80 feet free of wires or charging mats:
The PowerSpot transmitter was designed to automatically top off up to 30 PowerSpot-enabled devices left on a countertop overnight in its charging zone, which varies with device type and power consumption. Instructions included with enabled devices will show recommended charging distance and time for that device. For example, power-hungry, heavily used devices like game controllers, smart watches, fitness bands, hearing aids, or headsets charge best up to two feet away; keyboards and mice up to six feet away; smart cards and TV remotes up to 10 feet away; and low-power devices like home automation sensors up to 80 feet away. On the transmitter, an illuminated LED indicates devices are charging and it turns off when they’re done. Audible or visual alerts indicate when devices move in and out of the charge zone.

PowerSpot development kit facilitates the design of PowerSpot-based wireless charging ecosystems:
The development kit enables engineers to test the PowerSpot's capability to charge devices using multiple battery types. This data can help them decide if the wireless power solution is a fit for their application, and then plan their designs. It includes the PowerSpot TX91503 transmitter, a development board able to charge three kinds of batteries (a Li-ion 2032 coin cell battery, a Li-Mn single AA, and 3 Ni-MH AAAs in series), two Powerharvester receiving antennas (patch and dipole), and two PS915 illuminated RF field detectors. The development board communicates with the PowerSpot via BLE to turn it on and off, and communicates key data to the development kit’s Powercast Charging Monitor app. The board also includes an LED indicator that demonstrates how distance from the transmitter impacts charging rate.

Once the transmitter reaches mass production, Powercast projects a $50 ASP from major electronics stores or consumer electronics manufacturers offering it as a charging option.

The development kit, expected Q4 2018, will sell for around $400 from the same distributors.