Technology can help service the underserved

Universal health care is one of the most important governmental, societal and economic issues in recent time. Attention has been mainly focused on providing health insurance to the uninsured. However, universal health care also means reaching hard to reach and underserved populations with medical services. So, how can service be provided to the underserved? Technology is the obvious solution, and that points to smartphones, tablets, and bio-medical sensors. As of now, there are over 40,000 medical apps in the market - and this is just the start. In 2011 there were 124 million medical app downloads and it almost doubled to 247 million in 2012. Health and fitness sensors are expected to have a compound annual growth of over 37% (see Figure 1). Apps and bio-sensors on mobile platforms are now able to monitor sleeping, eating, pregnancy, prescription management, moods, blood pressure, glucose levels, pollen levels, peak flow, auscultation, heart rhythm, ultrasound diagnostics, skin stress chemicals, and many other things. With more advanced instruments connected to the phones any number of diagnostic procedures can be provided. 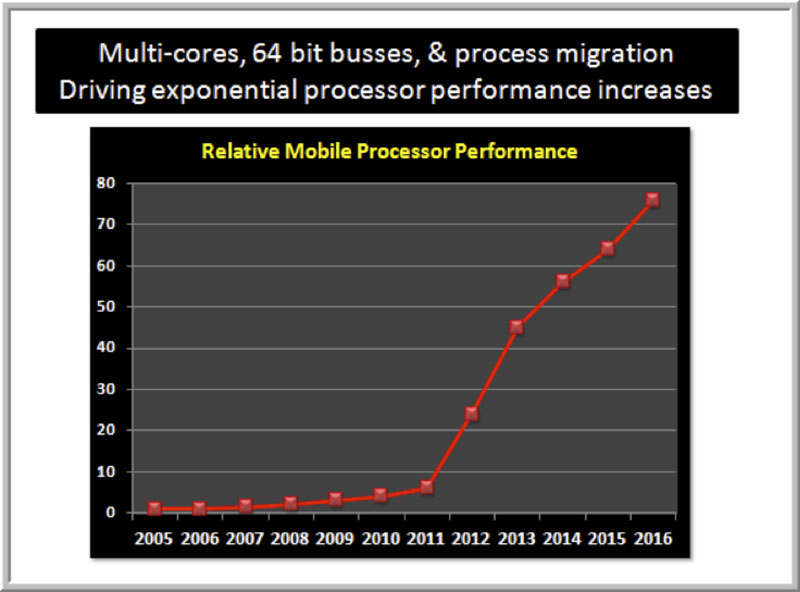 New mobile medical sensing and processing functions come at a cost, however. And that cost is power drain. At the heart of handsets are advanced application processors, which are gaining in speed and processing capabilities every year. However, with each new generation of processors more pressure is put on battery life. This is especially problematic for battery powered remote medical systems running on mobile platforms (see Figure 2). 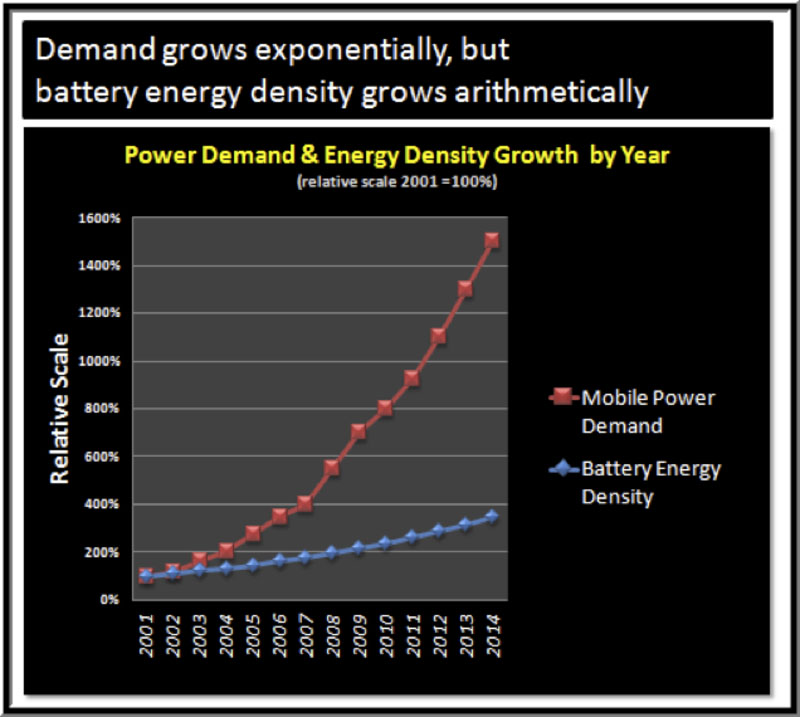 The ability to take readings over long periods of time is often mission critical for medical telemetry. When important care is tied to battery life, battery life becomes an important care. So, can typical mobile batteries keep up with processor improvements? In many cases, probably not (Figure 3). Even though the performance of batteries is improving, it is not improving as fast as the processors that they power. Battery performance, which is measured by energy density, only increases at a linear rate, which is much slower than processor improvements, which are exponential. This gives rise to a power gap that is anathema to medical applications that need long battery life. Charging a cell phone once a day is a routine for most users, but that will not be adequate for many medical apps. Common mobile medical diagnostics such as holter monitors (i.e. mobile EKG), for example, must operate a full day, several days, or even weeks between charges. Therefore, mobile medical designs must investigate all opportunities for reducing power drain and augmenting current mobile platform powering arrangements. The rechargeable single cell Li-ion battery is a common starting platform for most mobile designs due to the abundant ICs available to navigate the 2.5 V - 4.2 V voltage range. But, they may not be practical for many medical units. Batteries have increased in size to cope with the increased power drain from larger and brighter display technologies now common in handsets, phablets and tablets. 3000 mAh batteries are becoming common now. Even still, a daily recharge routine is nearly mandatory because as batteries get bigger more features are added to take advantage of that (or is it the other way around?). Anyway, medical handhelds and sensors have a much different use profile than consumer phones and tablets, and that can quickly eliminate the possibility of using an integrated rechargeable battery that needs daily charging. So, if longer life is needed how can that be provided? This is where the concept of the primary battery comes into play. A "primary battery" is defined as a battery that generates potential by using an irreversible chemical reaction. This, by definition, does not allow the battery to be charged. Primary batteries are old-school batteries that you buy in the store, use until depleted and then toss them out. The advantage of primary batteries is that they typically retain more charge over a longer period than rechargeables. There are many form-factors for primary batteries, but the common voltages for handheld or wearable applications are 1.5 V cylinders (e.g. AA, AAA, etc.) or 3 V coin cells. These batteries are known for their long shelf life when under no-load and their relatively low replacement costs. The typical 1.5 V alkaline battery is designed with 0.9 V Vmin, but is commonly stacked in series to double or triple the output voltage range. A coin cell such as the CR2032 lithium-based form factor is known for a stable 3 V output voltage over a large percentage of its life expectancy (depending on the load transient profile). Due to this useful 3 V potential, they are often nested in parallel to handle larger load transients, and interface directly to a microprocessor without DC/DC regulation being needed. Since a human is required to insert primary batteries into the unit when a cell is depleted, incorrect battery insertion is possible. The negative potential of a reversed battery is harmful to most ICs and microprocessors. So, reverse polarity protection must be provided. The most simplified form of protection is a Schottky blocking diode, but the voltage drop and corresponding efficiency losses are not acceptable in long battery life applications. A P-channel FET can be used, but may not be characterized for true negative voltage blocking. Two FETs are typically needed in series to orient the body-diodes in an opposing structure when reverse blocking is desired. The appropriate gate drive of these MOSFETs needs to also be considered for the various battery configurations, as well as the timing when they are applied. 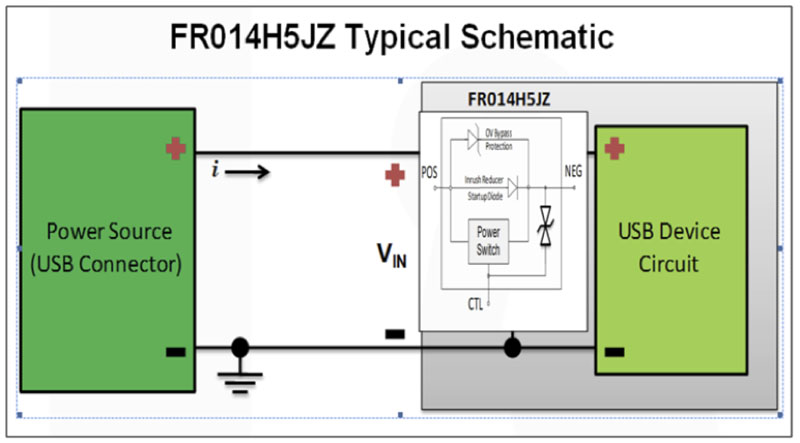 To address reverse polarity protection, Fairchild has introduced an IC family that blocks like a Schottky diode, but signals passes through with the efficiency of a MOSFET. The FR014H5JZ is a high-side protection device in this family with -30 V blocking capability and +32 V forward passing capability. When the battery is inserted correctly, the FR014H5JZ is nearly transparent to the power budget at less than 20 mOhm. This simple but effective device can replace multiple devices while still improving battery life. Figure 4 shows the configuration of this reverse polarity protection device. Progressing downstream in the power path for all battery power designs, intelligent load switches can be used to disconnect high leakage loads or exposed connectors when not needed. These are common in high reliability medical applications. The various flavors of the Intellimaxâ„¢ series incorporate digital ON/OFF control, in-rush current protection; reverse current blocking, temperature protection, and over-current protection. The reverse current blocking feature is useful in the event that the load could be at higher potential than the source, even if only briefly. Wafer level chip-scale packaging with solder bumps on the bottom and geometries down to 0.8mm x 0.8mm aid in board space optimization. A simple P-channel FET can be used, but if any additional protection is needed, particularly when the switch is far enough upstream such that a failure would result in multiple downstream power outages, the additional components required around the P-FET justify the migration to an intelligent load switch. Mobile power sources, especially for medical applications may become more hybridized using rechargeable batteries with an onboard primary battery and possibly low-power energy harvesting. In such situations, reverse polarity protection devices and intelligent load switches will become even more valuable. The key to longer battery life is to align the source potential with the load requirements while limiting any required DC/DC regulation. It is becoming very clear that smartphones and tablets will provide benefits that reach far beyond their current usage patterns including tele-medical applications. Bio-medical sensors, medical apps, and the cloud are intersecting with mobile platforms and societal ethics and public policy to drive an expansive market for mobile medical hardware devices. It is the job of hardware engineers and IC providers to ensure that those platforms are powered up and stay powered up. Fairchild Semiconductor