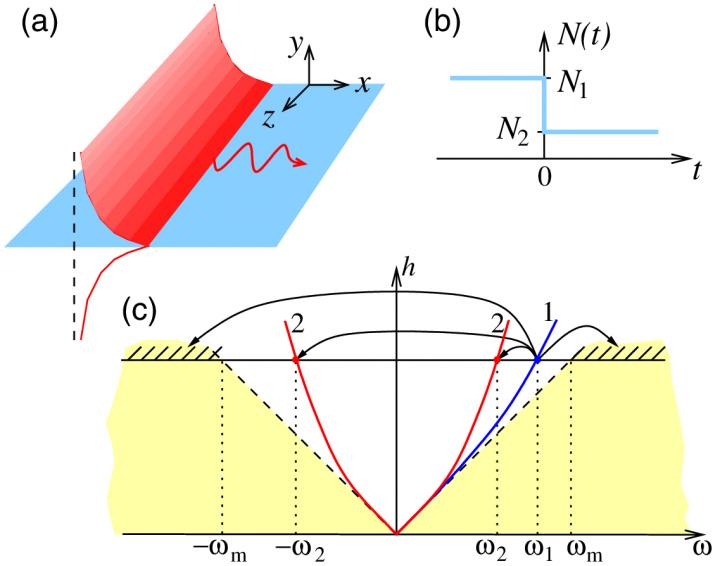 Fig. 1. (a) Illustration of a surface plasmon propagating along a graphene sheet at ?<0t<0. (b) Time dependence of the graphene carrier density.

(c) Dispersion diagram showing the frequency transformation of the initial plasmon when the carrier density decreases from ?1N1 to ?2N2.

The transition from electronic integrated circuits to faster, more energy-efficient and interference-free optical circuits is one of the most important goals in the development of photon technologies. Photonic integrated circuits (PICs) are already used today for transmitting and processing signals in optical networks and communication systems, including, for example, I/O multiplexers of optical signals and microchips with an integrated semiconductor laser, a modulator and a light amplifier. However, today PICs are mostly used in combination with electronic circuits, while purely photonic devices are not yet competitive.

One of the challenges in creating PICs is the complexity of manufacturing various devices (waveguide couplers, power dividers, amplifiers, modulators, lasers and detectors on a single microchip), since they require different materials. The main materials used in existing PICs are semiconductors (indium phosphate, gallium arsenide, silicon), electro-optical crystals (lithium niobate), as well as various types of glass.

In order to increase the speed of PICs in controlling light flux, researchers are searching for new materials with high optical nonlinearity. Among promising materials, one can name, in particular, microwaveguides based on the newly discovered material, graphene (a layer of carbon atoms one atom thick), in which charge carrier concentrations can be effectively controlled using optical pumping or applied bias voltage.

According to Mikhail Bakunov, Head of the UNN General Physics Department, recent theoretical and experimental work shows the possibility of superfast (involving times of several light field periods) carrier concentration changes in graphene, which opens up possibilities for manipulating the amplitude and frequency of light waves (plasmons) directed by the graphene surface.

"The development of physical models for the description of electromagnetic processes in nonstationary graphene is of great practical importance. It causes an increased interest on the part of researchers. One of the results of research in 2018 was the prediction in a number of papers of the possibility to enhance (increase the energy) of plasmons by changing the carrier concentration in graphene, which is certainly attractive for creating new devices," notes Mikhail Bakunov.

Alexei Maslov, Associate Professor at the UNN General Physics Department, continues: "Our study is aimed at developing the physical principles of ultrafast photon control in integrated microchips, in other words, at improving the performance of microcircuits and microchips used in microelectronics and nanoelectronics."

Researchers of the UNN General Physics Department have developed a theory for the conversion of light waves propagating over the surface of graphene (a layer of carbon atoms one atom thick), when the concentration of electrons in graphene changes over time. In contrast to previous research, the interaction of electrons with the light field is precisely taken into account. One of the results of the study was to rule out the previously predicted possibility of amplifying light waves by changing the concentration of electrons. Thus, the work of UNN scientists gives a new look at the dynamics of waves in non-stationary microwaveguides, thereby contributing to the development of PICs.

Research results have been published in Optica, one of the most authoritative international journals in the field of photonics: https://www.osapublishing.org/optica/abstract.cfm?uri=optica-5-12-1508.