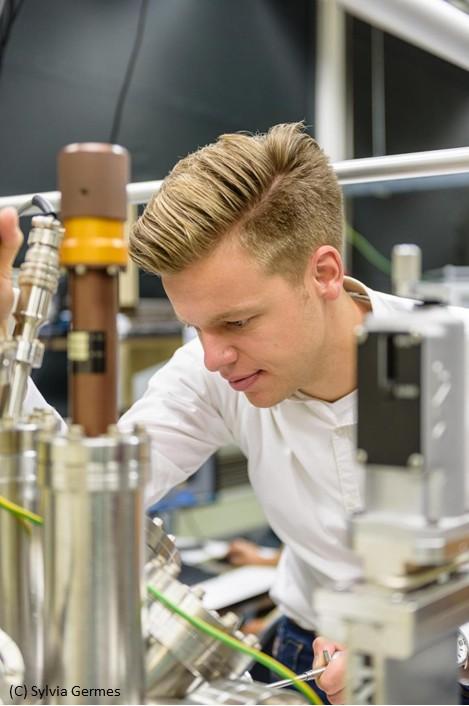 Topological insulators, a class of materials which has been investigated for just over a decade, have been heralded as a new 'wonder material', as has graphene. But so far, topological insulators have not quite lived up to the expectations fueled by theoretical studies. University of Groningen physicists now have an idea about why. Their analysis was published on 27 July in the journal Physical Review B.

Topological insulators are materials that are insulating in the bulk but allow charge to flow across the surface. These conducting states at the surface originate from ordering patterns in the states where electrons reside that are different from ordinary materials. This ordering is linked to the physical concept of 'topology', analogous to that used in mathematics. This property gives rise to very robust states with some special properties.

For one, their spin -- a magnetic property of electrons which can have the values 'up' or 'down' -- is locked to their movement. 'This means that electrons moving to the right have spin down, and those moving to the left have spin up', explains first author of the study Eric de Vries, PhD student in the 'Spintronics of Functional Materials' research group led by his supervisor prof. dr. Tamalika Banerjee. This is group is part of the Zernike Institute for Advanced Materials. 'But it also means that when you inject electrons with spin up into such a topological insulator, they will travel to the left!' Topological insulators might therefore be very useful in the realization of spintronics: electronics based on the quantized spin value rather than the charge of electrons.

The special properties of topological insulators are predicted by the theoretical analysis of the surface structures of these materials, made from crystals of heavy atoms. But experiments show mixed results, which don't quite live up to the theoretical predictions. 'We wondered why, so we devised experiments to investigate the behaviour of the surface state electrons. Specifically, we wanted to see if transport is really limited to the surface, or if it is also present in the bulk of the material.'

Earlier experiments by the group, in which they used ferromagnets to detect the spins of electrons generated in the topological insulator, were surprising, says De Vries. 'We demonstrated that a voltage presumably originating from spin detection can originate in factors other than the locking of electron spin to its movement. Using different geometries, we showed that artefacts related to stray magnetic fields generated by the ferromagnets can mimic similar spin voltages.' This observation may lead to a re-evaluation of some published results.

This time, they used a different approach. 'We analyzed the topological insulators using strong magnet fields. This causes electrons to oscillate in transport channels.' De Vries went to the national High Field Magnet Laboratory at the Radboud University Nijmegen, where a 33-Tesla magnet is available, one of the stronger magnets in the world. 'Others have done similar tests with weaker magnets, but these are not sensitive enough to reveal the additional transport channels that coexist with the surface states.' De Vries's experiments showed that a considerable part of the charge transport occurred in the bulk phase of the material, and not only at the surface.

The reason for this, explains De Vries, is the imperfect crystal structure of the topological insulator. 'Sometimes there are atoms missing in the crystal structure. This results in freely moving electrons. These start to conduct as new transport channels, generating electric current in the bulk of the material.'

So why has no one noted this before? De Vries stresses that interpreting transport measurements made on topological insulators can be difficult. 'We experienced this in our previous experiments. Our message is that extreme care is needed in the interpretation of experimental observations for devices based on these materials.' Also, experiments which might lead to clearer conclusions require very high magnetic fields in specialized labs.

The results point to a way to improve topological insulators. 'The key is to grow the crystals without any missing atoms. Another solution is to fill the holes, for example with calcium ions that bind the free electrons. But that might cause other disturbances to the electrons' mobility.' For ten years, topological insulators were all the rage. They were compared to the wonder material graphene. The discovery that, in practice, topological insulators have glitches serves as a reality check. De Vries: 'We need to study and understand the interaction between the surface states and the bulk material in much more detail.'