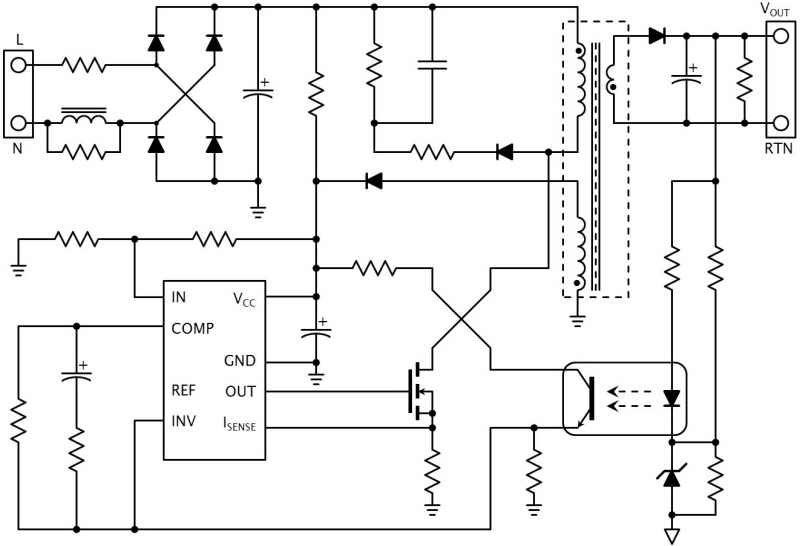 Over the past decade, controller-IC manufacturers have worked to reduce so-called vampire or stand-by power consumption. Organizations such as Energy Star in the US, Blue Angel in Germany, and CNIS (China National Institute of Standardization) have introduced strict stand-by power-consumption standards for consumer electronics. New topologies in the AC—DC power-supply market need implementation to achieve the approvals of these important standards agencies. Traditional flyback converters designed with legacy analog controllers can struggle to achieve the combination of low cost, high operating efficiency, and low stand-by power consumption that today's consumer electronics require. The market now demands new topologies that address all AC—DC feature and performance requirements at low BOM cost. With the typical number of small appliances and electronic devices in an average household rising to 24 over the past decade, the consumer electronics and home appliances market reached its zenith despite one of the largest global economic downturns in a century (Reference 1). With the number of powered devices in our homes increasing, the demand on the electrical power grid is expanding at an equivalent rate. Many governments, realizing the economic and environmental ramifications of the ever-increasing electrical load have implemented strict energy standards to limit the power consumption of these electronic devices while they're operating and, more importantly, while they're in stand-by mode. The biggest problem area is the main power supply, whether for powering plugged-in electronics or the charger for portable electronics. Traditional approaches use power supply technologies that waste energy at low output power as a consequence of keeping costs down. The industry needs new techniques to reduce power consumption when the load is virtually zero without increasing system cost.

The main off-line AC—DC power supply for consumer electronics traditionally uses a simple analog PWM (pulse-width modulation) controller IC and low-cost external components. To keep cost to a minimum, the designer generally uses a generic analog PWM controller, typically a controller that could apply to multiple configurations with a minimum of internal complexity. With these basic controllers, the main power-supply topologies are typically isolated flyback or forward converters, requiring a large number of external components and output feedback from a costly opto-isolator and several discrete components for external frequency compensation (Figure 1).

Most of these analog controllers are simple PWM controllers which operate in full PWM mode regardless of the load conditions. This works well at full output power, but efficiency, ?, quickly degrades at medium and light loads, making it difficult for these legacy controllers to meet modern efficiency requirements, which use an average ? calculation based on output power to set a minimum ? requirement. At light load currents, the legacy controllers will have efficiencies well below 70% that pull down the average, making it difficult for these converters to meet the new standards. Designers can implement additional modes of operation, such as PFM (pulse-frequency modulation) or pulse-skipping to improve ?, but this adds complexity and circuit cost that may be burdensome for the mainstream market. Digital control technology for power supplies has been around for several years but it has now matured to the point where the cost—performance tradeoff can better that of analog alternatives. In the case of off-line power supplies, digital control blocks' benefits surpass those of analog-equivalent blocks.

The analog block monitors voltage directly and modulates the output based on that input (Figure 2a). In contrast, the digital block converts the traditional analog input into a digital signal, which it then filters and processes to determine the output conditions (Figure 2b). 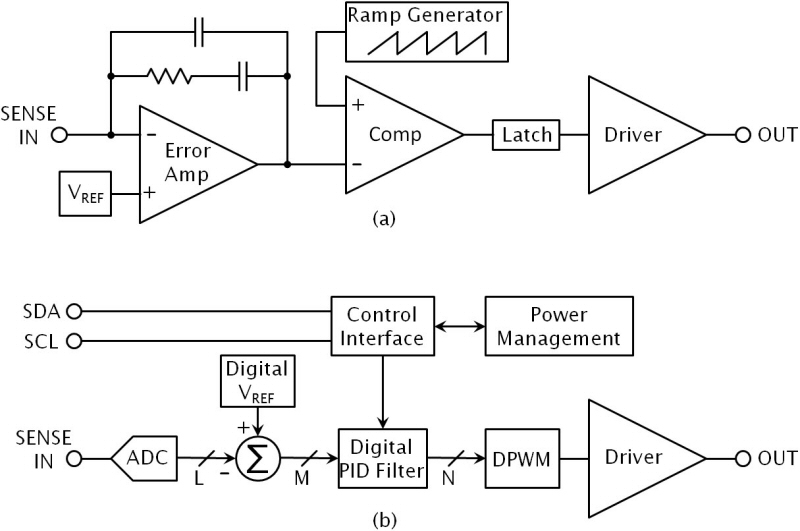 The digital converter, however, achieves a degree of freedom that the analog circuits cannot: The digital block can quickly modify the modulation scheme, matching the converter's operating mode to the system's needs, increasing ? without sacrificing performance. Additionally, because digital algorithms manage the loop compensation, there is no concern about stability and, in some cases, no need for external compensation components. In the event of heavy loads, the controller can drive the output at its highest programmed switching frequency to maximize ?. When the load current falls to a level where the switching losses become an important efficiency factor, the digital controller can change the modulation from PWM to PFM, reducing the average switching frequency and saving power. Digital control makes it possible to implement this type of dynamic multi-mode approach cost-effectively. 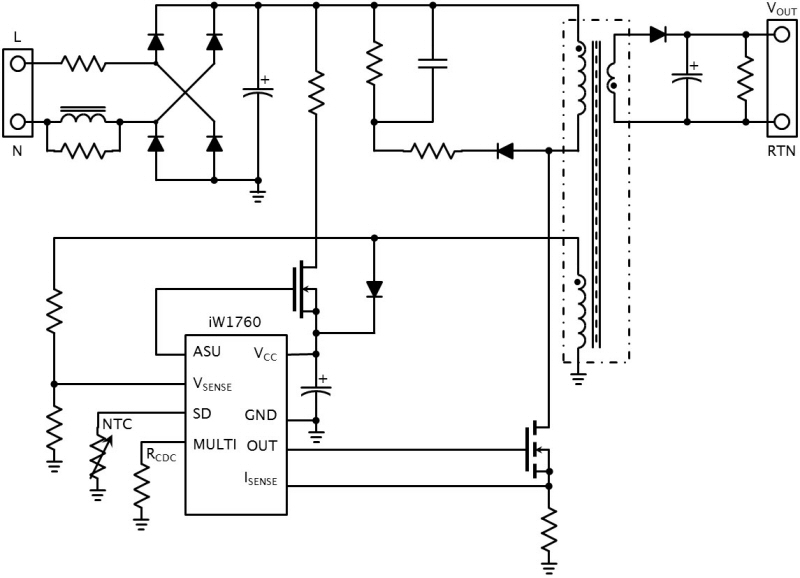 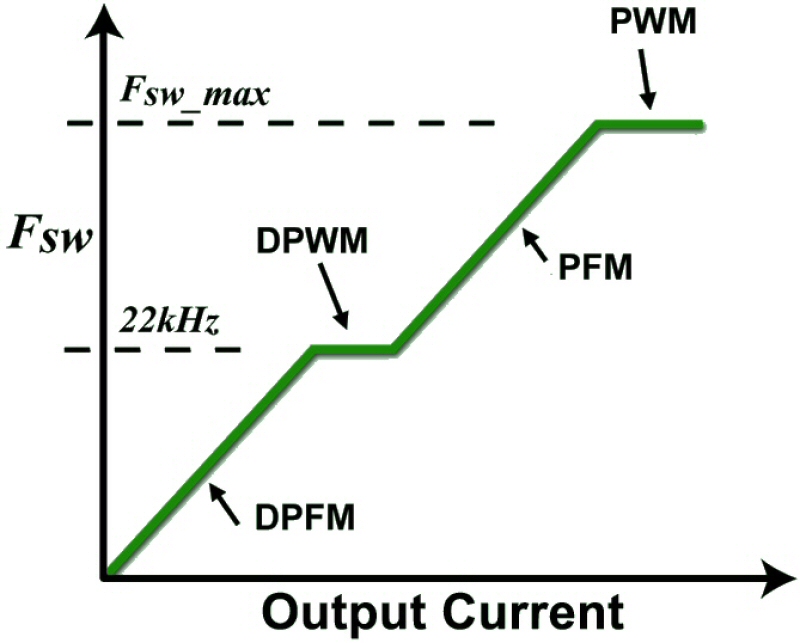 The converter operates in full PWM mode with a constant frequency at high output currents. When the output current reaches a calculated minimum threshold, the converter switches to PFM mode, increasing the off time to save energy. As the load current decreases to the point where the PFM switching frequency would possibly enter into the audible spectrum (no less than 22 kHz), the device automatically switches into DPWM mode, holding the switching frequency constant at 22 kHz. When the load current drops low enough, the digital block changes the converter into DPFM mode, where the switching frequency drops into the audible range, but at power levels so low that the converter does not emit audible noise. An analog controller, operating in full PWM mode at very light loads will end up dissipating 0.5—1 W just in power lost in the external components and the operating current of the controller itself. This power consumption is beyond the levels that standards organizations such as Energy Star have established (Figure 5). 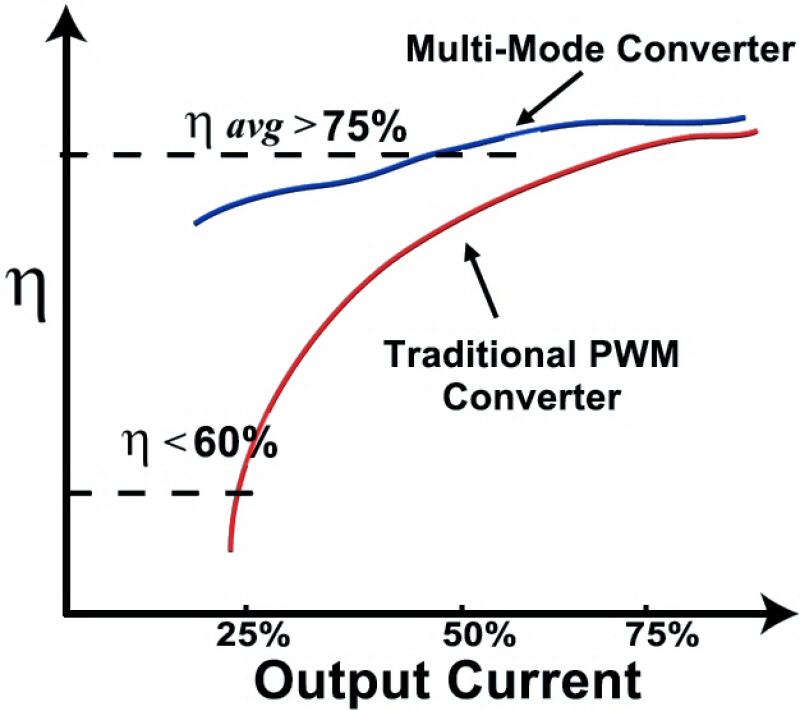 By using the digital control block, the user enjoys efficiency levels greater than 80% at full load and an average efficiency over a broad operating current range greater than 75%. Modern digital controllers, such as the iW1760, can achieve a no-load power consumption of only 50 mW. This is well below Energy Star's requirement that AC—DC external power supplies consume 300 mW or less in stand-by mode.

Besides the efficiency gains, digital control also allows designers to reduce the external component count. By managing compensation in the digital domain, designers can remove several passive components from the schematic. The digital controller can also implement primary-side control without sacrificing regulation performance. This allows the circuit to provide an isolated output without an opto-isolator, a component that is costly and is one of the weak links in power supply reliability. iWatt