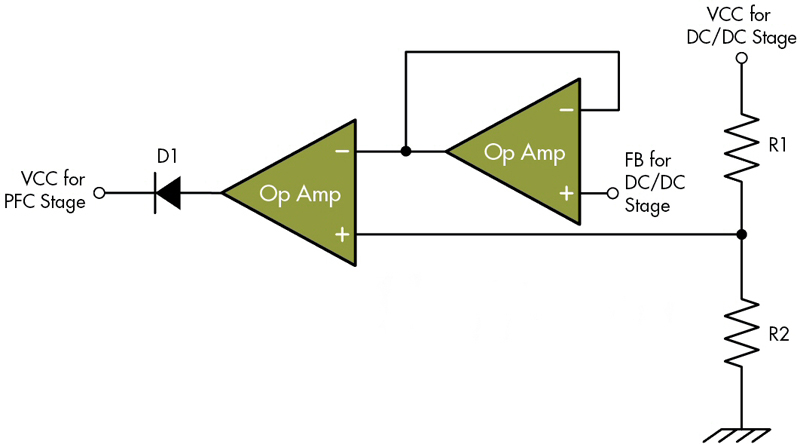 LEDs provide high-efficiency, environment-friendly characteristics, and a long life compared to conventional lighting sources. Therefore, they are becoming a primary light-source choice to reduce energy consumption in both internal and external lighting. A switching power supply designed to power-up LED lamps should also exhibit high efficiency to match the energy-saving nature of the LED lamp. In addition to high power-conversion efficiency during normal operation, the switching power supply's standby power consumption has also become a popular focus for the LED industry. It is expected that standby power consumption will be regulated to less than 1 W or even 300 mW in the near future. LED lighting applications, however, have not adopted an auxiliary power stage dedicated to the standby power supply primarily because the lighting applications do not have a standby mode during operation. However, the switching power supplies powering LED lamps still connect to the grid and draw power even with no lamps lit or under broken-lamp conditions. This is a primary source of concern for standby-power levels in lighting applications. Lighting systems with poor standby power consumption in, for example, empty office buildings are not environmentally sound. Introducing a simple auxiliary circuit can reduce standby power consumption. This simple circuit enables burst-operation of the PFC (power factor correction) stage. A 120-W-rated two-stage switching power supply demonstrates the concept and achieves less than 1-W of standby power consumption over a wide input range. Two-stage Configuration Switching power supplies for LED street lighting typically use a two-stage configuration because of their power rating and need to improve power factor. The power supply comprises a PFC block for the first stage and a downstream DC-DC converter for the second stage. At the medium power range—around 100 W—CRM (critical conduction mode) is an appropriate control scheme for the PFC stage. For the downstream DC-DC converter, a quasi-resonant flyback topology is popular at that power rating. Power controllers, such as the FAN6300 PWM (pulse-width modulation) controller, have an internal valley-voltage detector that ensures the power system operates in quasi-resonant mode under a wide range of line voltages, and reduce switching losses to minimize the switching voltage on the drain of the power MOSFET. To minimize standby power consumption and improve light-load efficiency, a proprietary green-mode function provides off-time modulation to decrease switching frequency and performs extended valley-voltage switching to keep the MOSFET drain-source voltage at turn-off to a minimum level. With this feature, the second DC-DC stage enters burst-operation at no-load and can achieve very good standby power consumption. Most existing PFC controllers do not have the burst-operation feature, mainly because the PFC-stage design usually targets consumer or display applications and the auxiliary power stage is separate in those cases that supply voltage to PFC and DC-DC stages. In LED lighting applications, which usually do not implement an auxiliary power stage, the PFC stage should be turned off or a standby-power-consumption rating less than 1-W is not possible. 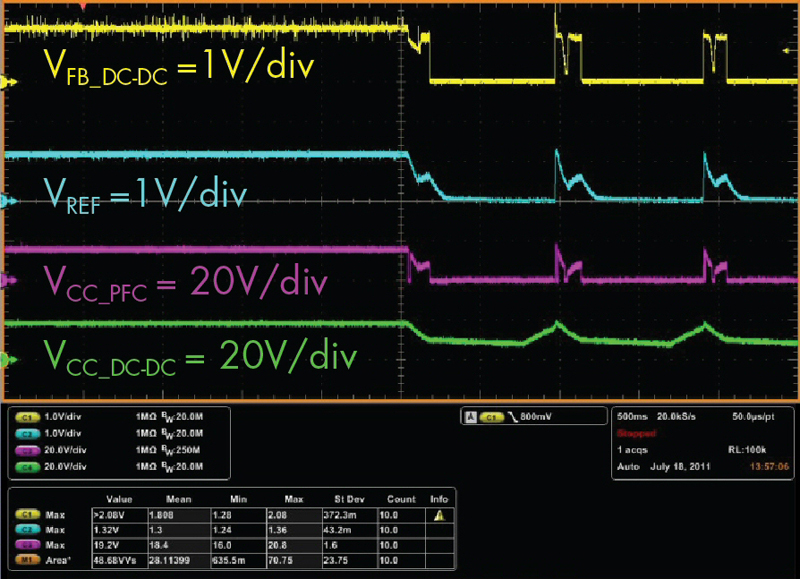 The PFC stage starts burst-operation as soon as the second stage flyback converter enters burst-operation and stops burst-operation to synchronize with the flyback converter. By implementing burst-mode operation for the PFC stage, it is possible to eliminate large inrush currents that cause potential problems while dramatically reducing standby power consumption. In order to evaluate the burst operation of the PFC stage, a 120-W (48-V, 2.5-A) rated LEB-016 demo board for LED street lighting is equipped with a FAN7930B CRM PFC controller, FAN6300A quasi-resonant flyback controller with burst-mode operation, and the PFC control circuit in figure 1. The PFC burst-mode implementation keeps the PFC and DC-DC stages synchronized (Figure 2). 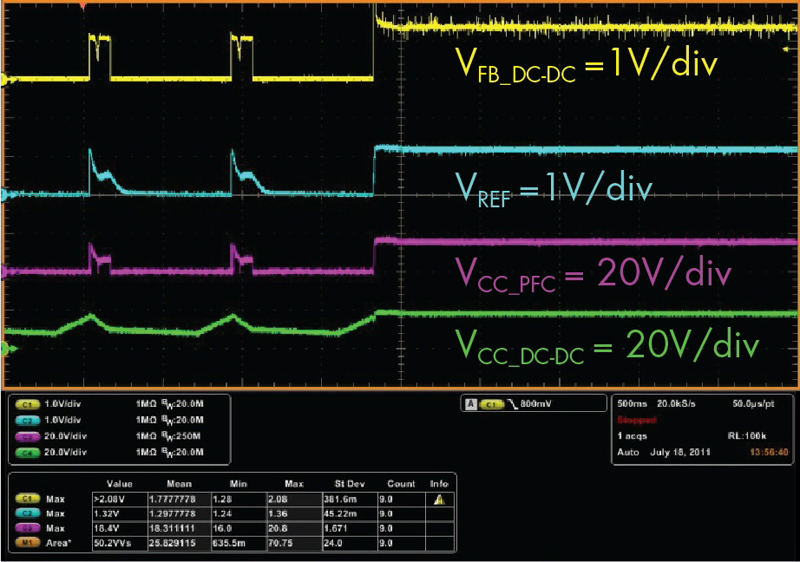