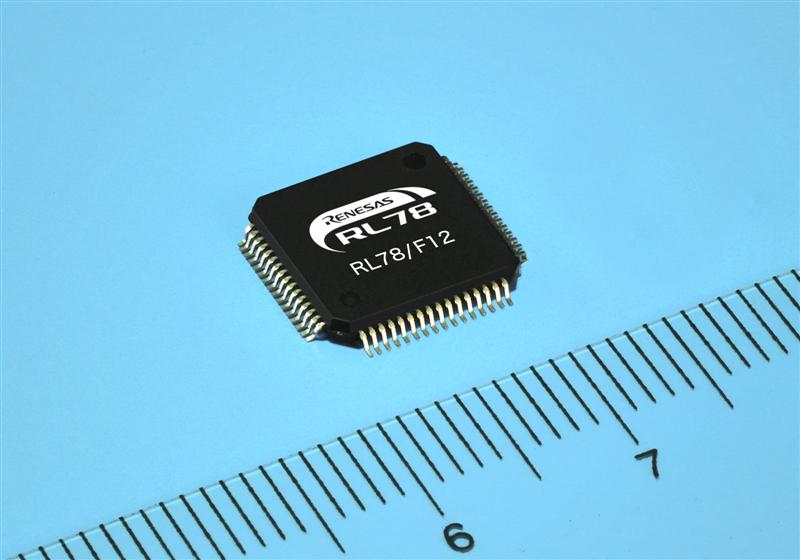 Renesas Electronics, a premier provider of advanced semiconductor solutions, today announced the availability of 32 new RL78/F12 16-bit microcontrollers (MCUs). These contribute to reduced system power consumption and higher performance for automotive control systems, including keyless entry, power window control, mirror control, and other applications. The new MCUs are the first group of devices in Renesas' F Series of automotive products in the new RL78 family that feature industry-leading low power consumption and high performance. The RL78 family combines the superlative technologies of Renesas' main existing products in the 8/16-bit MCU market, the 78K (78K0 and 78K0R) and R8C. It also integrates an extensive set of peripheral functions around the RL78 CPU core, which is based on the low-power/high-performance 78K0R CPU core. As a result of the growing number and functionality of MCUs in automobiles, there is an increasing demand for MCUs that can provide even lower power consumption, a reduction in printed circuit board mounting areas, and technology to reduce overall system component count. To respond to these needs, Renesas has released the F Series of automotive MCUs in the RL78 family that inherit the excellent features of the earlier Renesas R8C and 78K (78K0 and 78K0R) low-power MCUs which have a proven track record in automotive applications. Aiming at extreme reductions in power consumption, these new products respond to the need for 8/16-bit devices that can reduce total costs across whole system structures. Furthermore, the trend toward mechatronics, in which electronic control and mechanical components are integrated together, is progressing and the market demands performance when operating at high temperatures, such as in the engine compartment or headlights. At the same time, it is becoming increasingly important to focus efforts on complying with functional safety standards. For this reason, Renesas has included a rich set of diagnostic functions in the RL78/F12 MCUs to support high-temperature operation and functional safety. Key features of the RL78/F12 MCUs The new RL78/F12 MCUs include functions that support internal Flash memory with capacities from 8 to 64 kilobytes (KB); packages from 20 to 64 pins; and the LIN (Local Interconnect Network) specification, which has become the standard in-car network. 1) Low power consumption and high processing performance contribute to reduced power consumption in applications Power consumption in these MCUs has been reduced to the industry's lowest levels with an operating current of 70 μA/MHz (at 32 MHz for basic operations) and standby current of 0.6 μA during normal operation (see note 1), which is about 1/10 of previous Renesas products. At the same time, the MCUs also achieve a CPU performance of 41.6 DMIPS at 32 MHz (1.6 times the performance of earlier Renesas products). The RL78/F12 products are manufactured in a 130 nm process which results in a reduction of about half the power consumption of the earlier Renesas 78K0R/Fx3 and R8C/3x products. The RL78/F12 MCUs also contain a new low power mode (snooze mode), which allows A/D conversion and serial communication to be executed without waking up the main CPU. This snooze mode feature also will contribute to system-wide power consumption reductions. 2) Support for low-voltage operation at 1.8 V, effective for applications such as keyless entry The RL78/F12 MCUs can perform data flash write/erase operations and A/D conversions at 1.8 volts (V), and can therefore be highly effective in applications that operate at low voltages such as keyless entry. 3) Support for high-temperature operation at ambient temperatures up to 150°C contributes to integration of mechanical and electronic systems and use of end products at high temperatures. Although earlier Renesas products supported ambient temperatures (Ta) up to 125°C, the RL78/F12 MCUs support operation at ambient temperatures of up to 150°C, allowing their use in high-temperature environments such as the engine compartment and headlights. 4) Extensive set of diagnostic functions that support functional safety As the amount of electric and electronic equipment included in cars increases, efforts to support functional safety standards are becoming increasingly important. The RL78/F12 MCUs contribute to system safety by detecting and preventing abnormal operations in the end product. They achieve this with protection functions such as a flash data error detection using a Flash memory CRC calculation function, RAM parity detection, illegal memory access detection, a RAM data and SFR inadvertent overwrite due to runaway code protection function, and an A/D converter self-test function. The CPU load is reduced by implementing this rich set of diagnostic functions in hardware and, compared to software processing, this approach also achieves faster detection. Renesas plans to provide a self-test program to detect CPU core faults, and currently provides functional safety with a rich set of diagnostic functions and core diagnostic software. The RL78/F12 devices are the first release of the new RL78 family, which will address the majority of the 8/16-bit automotive MCU market. The RL78 family will combine the best legacy features of the 78K and R8C families and will advance the technology needed to meet next-generation automotive requirements. (Note 1) RL78/F12 is in STOP mode while the Window Watchdog Timer and the Low Voltage Detector are still in operation mode. About Renesas Electronics Europe Renesas Electronics Europe with its Business Operations Centre located in Dusseldorf, Germany, is a wholly owned subsidiary of Renesas Electronics Corporation (TSE: 6723), the world's number one supplier of microcontrollers and a premier supplier of advanced semiconductor solutions including microcontrollers, SoC solutions, secure MCU applications and a broad-range of analog and power devices. Renesas Electronics' European structure is comprised of four dedicated business groups serving the region's key markets: automotive, communications & consumer, industrial, and mobile platforms. The business groups are supported by the Engineering Group, which itself includes the Engineering Design Centre; the European Quality Centre that provides technical support to local customers in Europe; and the European Technology Centre to design leading-edge products specifically for the European market. Further information about Renesas Electronics Europe can be found at: www.renesas.eu