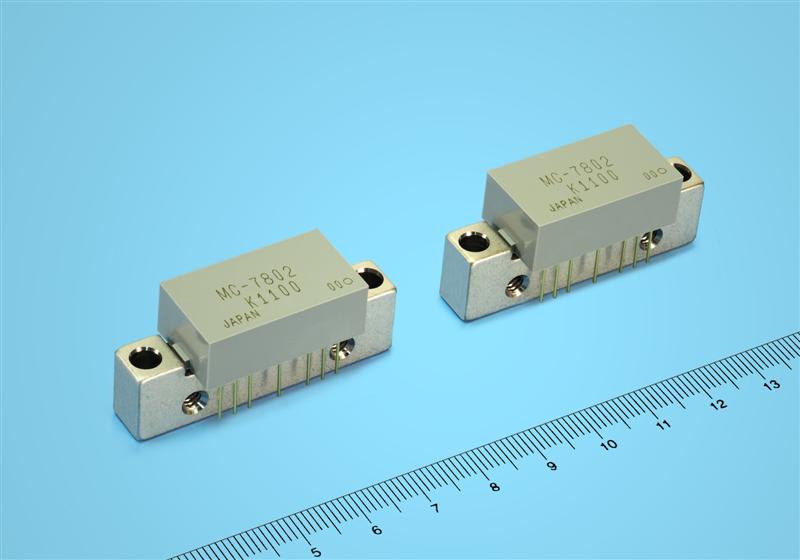 Renesas Electronics, a premier provider of advanced semiconductor solutions, today announced the development of the MC-7802, a gallium nitride (GaN) power amplifier module for 1-gigahertz (GHz) CATV (cable television) systems. Designed for use as a power amplifier for applications such as trunk amplifiers for CATV systems, the MC-7802 achieves high output power and low distortion that are among the best in the industry today. The MC-7802 incorporates newly-developed gallium nitride field effect transistors (GaN FETs) that can be operated at higher frequencies and deliver higher output power than existing Renesas Electronics power amplifier module products based on a different semiconductor material (gallium arsenide). The MC-7802 provides approximately double the output performance while maintaining power consumption and distortion performance at the same levels as existing products. This is achieved by optimizing the matching circuits of the GaN FETs and other components for CATV applications. This enables manufacturers of CATV transmission equipment to roughly double output power without increasing energy consumption, so the coverage area of the CATV network overall can be expanded with no increase in power consumption. The newly developed GaN FETs are fabricated on a silicon substrate instead of on a substrate made of silicon carbide, the material typically used previously. This will simplify production by enabling the use of large-diameter wafers. Renesas Electronics regards the GaN FET as a key device and plans to expand its power amplifier module product lineups for CATV to form a product family. CATV power amplifier modules are mainly used in the trunk amplifiers of CATV systems, the optical node units (ONUs) of hybrid fibre coaxial (HFC) systems, and the final stages of booster power amplifiers for common receiver units installed in multiunit dwellings such as apartment buildings. These power amplifier modules are semiconductor devices that amplify multiple channel signals to make up for transmission loss over the network. Since they amplify terrestrial digital TV, CATV, and Internet signals, their better linearity (distortion performance) secure more stable data transfer, and improved signal quality. The high output power provides greater flexibility in system design and makes it easier to keep costs down, allowing the network to be expanded by extending transmission distances and increasing the number of branches. With increasing digitization in recent years, CATV systems have gone beyond the simple distribution of video content and now also offer hybrid services including Internet access and Internet telephony (VoIP), and the number of channels handled has proliferated. As a result, the use of systems employing the 1 GHz band is expected to grow. However, although systems employing the 1 GHz band can transmit more channels than existing systems (which use the 770 MHz or 870 MHz band, depending on the region), the higher number of channels brings issues such as increased output power and distortion. In addition, demand is rising for high-frequency semiconductor devices with high output power, low distortion, and energy efficiency for use in amplifiers that maximize the transmission distance and number of branches in order to reduce the transmission cost. The new MC-7802 addresses this market demand by providing low power consumption together with improved output linearity and distortion characteristics. Key features of the MC-7802 (1) Industry-leading high output power and low distortion The GaN FETs support high-frequency, high-output operation. In addition, the amplifier circuit configuration and matching circuits of the components used have been optimized and circuit loss minimized. This results in improved linearity at high output power operation. In fact, output power is approximately double that of existing Renesas Electronics' power amplifier module products without an increase in power consumption. This high efficiency and high output power is among the best in the industry today. (2) GaN FETs formed on silicon substrate, enabling production using large-diameter wafers Unlike conventional manufacturing technology, the GaN FETs employed in the MC-7802 are grown on a silicon substrate. The use of a silicon substrate rather than an expensive silicon carbide substrate facilitates larger wafer sizes and will allow the MC-7802 to be more competitively priced. Renesas regards the new MC-7802 device as a strategic product that will enable the company to enlarge its share of the market for CATV power amplifier devices, and aggressive sales promotion is planned in Japan, North America, Europe and China. Renesas plans to follow up on the new MC-7802 device by developing and commercializing a family of similar products with a variety of gain performances. The company also has plans to continue development work on products incorporating GaN FETs for high-frequency applications and to steadily expand its lineup of such products. Please refer to the separate sheet for the specifications of the new MC-7802 gallium nitride (GaN) power amplifier module. About Renesas Electronics Europe Renesas Electronics Europe with its Business Operations Centre located in Dusseldorf, Germany, is a wholly owned subsidiary of Renesas Electronics Corporation (TSE: 6723), the world's number one supplier of microcontrollers and a premier supplier of advanced semiconductor solutions including microcontrollers, SoC solutions, secure MCU applications and a broad-range of analog and power devices. Renesas Electronics' European structure is comprised of four dedicated business groups serving the region's key markets: automotive, communications & consumer, industrial, and mobile platforms. The business groups are supported by the Engineering Group, which itself includes the Engineering Design Centre; the European Quality Centre that provides technical support to local customers in Europe; and the European Technology Centre to design leading-edge products specifically for the European market. Further information about Renesas Electronics Europe can be found at: www.renesas.eu