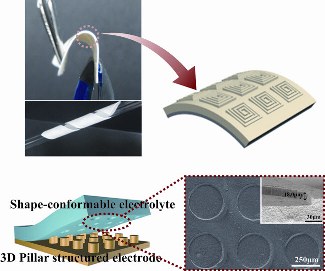 Korean Researchers have developed what appears to be the world's first printable and bendable lithium-ion battery. This could help speed up the production of smartphones with flexible displays, such as Samsung's Youm flexible OLED display. According to the research team, the batteries use nanomaterials which can be applied to any surface to create fluid-like polymer electrolytes. Prof. Lee Sang-young of Ulsan National Institute of Science and Technology (President Moo Je Cho) leads the project, working alongside nine other distinguished scientists from different places, like Prof. John A. Rogers of the University of Illinois, Researchers Younggi Lee and Gwangman Kim of ETRI (Electronics and Telecommunications Research Institute, President Heung Nam Kim), and researcher Eunhae Gil of Kangwon National University. The technology does not only make the batteries bendable, but the process also makes it more stable. "Conventional lithium-ion batteries that use liquefied Electrolytes had problems with safety as the film that separates the electrolytes may melt under heat, in which case the positive and negative may come in contact, causing an explosion," Prof. Lee said. "Because the new battery uses flexible but solid materials, and not liquids, it can be expected to show a much higher level of stability than conventional rechargeable batteries." This research was funded by the Ministry of Education, Science and Technology (Minister Lee Ju-ho) and the National Research Foundation of Korea (President Seung Jong Lee) and published in Advanced Materials (Title: Imprintable, bendable, and shape-conformable polymer electrolytes for versatile-shaped Lithium-ion batteries).