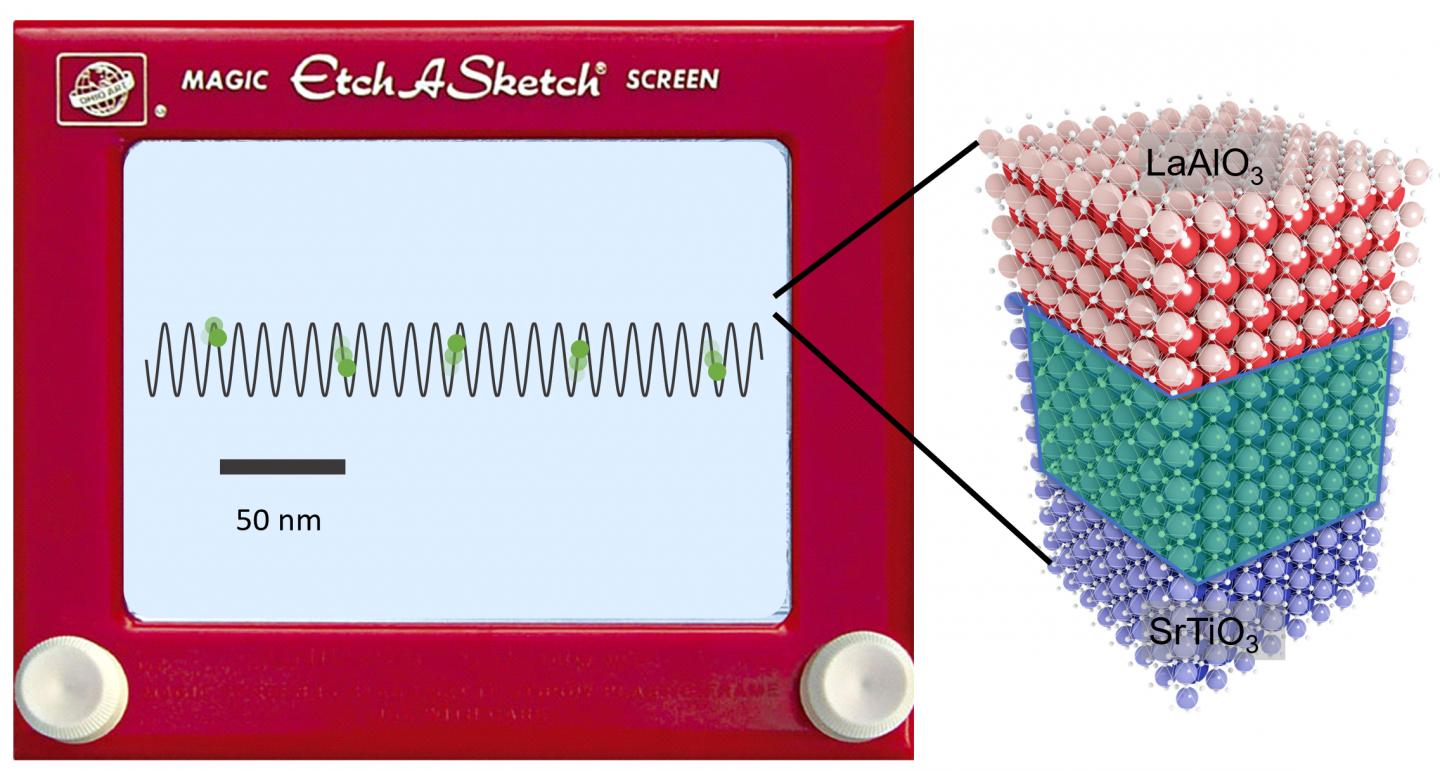 Illustration of sketched serpentine nanowires created from lanthanum aluminate and strontium titanate. The side-to-side motion of the electrons as they travel gives them additional properties that can be used to make quantum devices

A research team led by professors from the Department of Physics and Astronomy have created a serpentine path for electrons, imbuing them with new properties that could be useful in future quantum devices.

"We already know how to shoot electrons ballistically through one-dimensional nanowires made from these oxide materials," explains Levy. "What is different here is that we have changed the environment for the electrons, forcing them to weave left and right as they travel. This motion changes the properties of the electrons, giving rise to new behavior."

The work is led by a recent PhD recipient, Dr. Megan Briggeman, whose thesis was devoted to the development of a platform for "quantum simulation" in one dimension. Briggeman is also the lead author on a related work published earlier this year in Science, where a new family of electronic phases was discovered in which electrons travel in packets of 2, 3, and more at a time.

Electrons behave very differently when forced to exist along a straight line (i.e., in one dimension). It is known, for example, that the spin and charge components of electrons can split apart and travel at different speeds through a 1D wire. These bizarre effects are fascinating and also important for the development of advanced quantum technologies such as quantum computers. Motion along a straight line is just one of a multitude of possibilities that can be created using this quantum simulation approach. This publication explores the consequences of making electrons weave side to side while they are racing down and otherwise linear path.

One recent proposal for topologically-protected quantum computation takes advantage of so-called "Majorana fermions", particles which can exist in 1D quantum wires when certain ingredients are present. The LaAlO3/SrTiO3 system, it turns out, has most but not all of the required interactions. Missing is a sufficiently strong "spin-orbit interaction" that can produce the conditions for Majorana fermions. One of the main findings of this latest work from Levy is that spin-orbit interactions can in fact be engineered through the serpentine motion that electrons are forced to undertake.

In addition to identifying new engineered spin-orbit couplings, the periodic repetition of the serpentine path creates new ways for electrons to interact with one another. The experimental result of this is the existence of fractional conductances that deviate from those expected for single electrons.

These slalom paths are created using a nanoscale sketching technique analogous to an Etch A Sketch toy, but with a point size that is a trillion times smaller in area. These paths can be sketched and erased over and over, each time creating a new type of path for electrons to traverse. This approach can be thought of as a way of creating quantum materials with re-programmable properties. Materials scientists synthesize materials in a similar fashion, drawing atoms from the periodic table and forcing them to arrange in periodic arrays. Here the lattice is artificial--one zig-zag of the motion takes place in a ten nanometer of space rather than a sub-nanometer atomic distance.

Levy, who is also director of the Pittsburgh Quantum Institute, stated that this work contributes to one of the main goals of the Second Quantum Revolution, which is to explore, understand, and exploit the full nature of quantum matter. An improved understanding, and the ability to simulate the behavior of a wide range of quantum materials, will have wide-ranging consequences. "This research falls within a larger effort here in Pittsburgh to develop new science and technologies related to the second quantum revolution," he said.