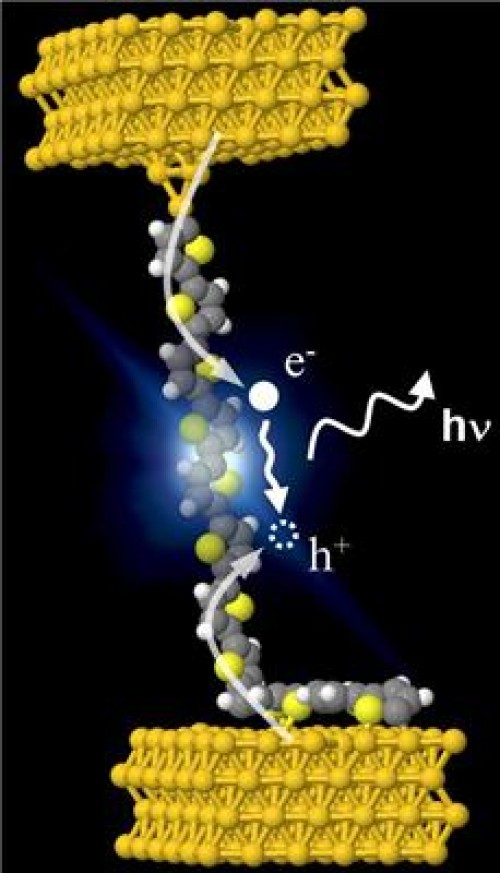 Artist impression of electroluminescence in a single polythiophene molecular wire suspended between the tip and the surface of a scanning tunneling microscope.

The ultimate challenge in the race to miniaturize light emitting diodes (LED) has now been met: a team led by the Institut de Physique et de Chimie des Matériaux de Strasbourg (IPCMS, CNRS/Université de Strasbourg), in collaboration with UPMC and CEA, has developed the first ever single-molecule LED. The device is formed from a single polythiophene wire placed between the tip of a scanning tunneling microscope and a gold surface. It emits light only when the current passes in a certain direction. This experimental tour de force sheds light on the interactions between electrons and photons at the smallest scales. Moreover, it represents yet another step towards creating components for a molecular computer in the future. This work has recently been published in the journal Physical Review Letters.

The scientists recorded the light emitted when a current passed through this nanowire. They observed that the thiophene wire acts as a light emitting diode: light was only emitted when electrons went from the tip of the microscope towards the gold surface. When the polarity was reversed, light emission was negligible. The collaborators showed that this light was emitted when a negative charge (an electron) combined with a positive charge (a hole) in the nanowire and transmitted most of its energy to a photon. For every 100,000 electrons injected into the thiophene wire, a photon was emitted. Its wavelength was in the red range.

From a fundamental viewpoint, this device gives researchers a new tool to probe phenomena that are produced when an electrical conductor emits light and it does so at a scale where quantum physics takes precedence over classical physics. Scientists will also be able to optimize substances to produce more powerful light emissions. Finally, this work is a first step towards making molecule-sized components that combine electronic and optical properties. Similar components could form the basis of a molecular computer.